OUT OF MIND » VOICES CARRY » AMAZING PEOPLE, PLACES & THINGS » Boy Miraculously Comes Back To Life After Parents Sign Papers To Donate His Organs

Boy Miraculously Comes Back To Life After Parents Sign Papers To Donate His Organs Mon May 07, 2018 1:56 pm 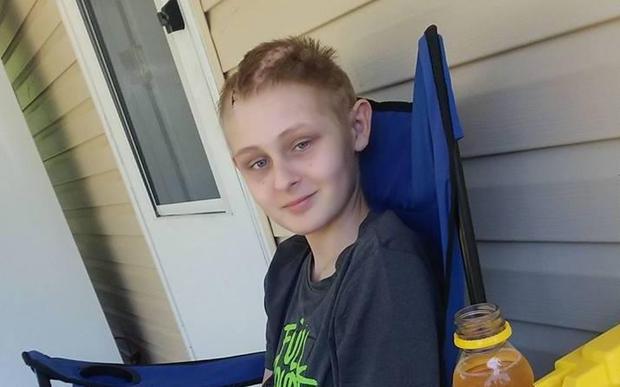 13-year-old Trenton Mckinley, who suffered severe brain trauma in an accident, miraculously regained consciousness after his parents signed paperwork to donate his organs. Two months ago Trenton was riding a small utility trailer when it flipped over and eventually landed on his head.
“I hit the concrete, and the trailer landed on top of my head. After that, I don’t remember anything,” he explained.
Trenton suffered seven skull fractures in the accident, and doctors believed he would never make a full recovery even if he came out of unconsciousness.
As his conditioned remained bleak, Trenton’s family was asked the tough question as to whether or not they would be willing to donate 5 of his organs to 5 other children who would then be saved as a result.  The family said yes. Trenton’s mother, Jennifer Reindl, signed the papers to donate Trenton’s organs.
“A man from the UAB organ donation came and talked to us in the family conference room about donating five organs to UAB children’s hospital that would save five other children. We said yes, that also insured that they would continue to keep Trenton alive to clean his organs for the donation,” Jennifer stated.
Then, a day before doctors were about to remove Trenton from life support he began to show signs of cognition, and has since begun to move towards recovery. In some ways one could view this as a coincidence, and in others you might begin to think the soul simply wasn’t ready to step out of its human experience just yet.
“The next day he was scheduled to have his final brain wave test to call his time of death but his vitals spiked so they cancelled the test,” his mother said.
Trenton has undergone surgery to reconnect his skull and it’s likely his recovery process will be slow, but it is steady.
Following his experience, Trenton was asked what happened while he was unconscious. He said he believes he was in heaven, or what would match that belief system.
“I was in an open field walking straight,” he told WALA-TV. “There’s no other explanation but God. There’s no other way. Even doctors said it.”

What Was Going On?

This reminds me of another story of a man who regained consciousness after being in a vegetative state for 12 years.
“My mind was trapped inside a useless body, my arms and legs weren’t mine to control, and my voice was mute. I couldn’t make a sign or a sound to let anyone know I’d become aware again. I was invisible – the ghost boy.” -Martin Pistorious
“I was there, not from the very beginning, but about two years into my vegetative state, I began to wake up.”
In Martin’s case, he was aware of his surroundings while in a vegetative state and he knew what others were saying and doing even though it appeared he was not there at all and he could not do anything. In Trenton’s case, he was unconscious and did not show any signs of being in the body at all, yet his consciousness was still having an experience.
Like Martin, Trenton eventually came back to the body right as the body was essentially at threat to no longer being able to host his soul. Could it be that this purely only happens in the mind? Is it more likely that what we’re beginning to discover in quantum mechanics is right, and that consciousness does not originate in the brain?
This is the ever importance of the rise of post-material science.

Are We Physical Beings?

This undoubtedly also brings up the idea of reincarnation. Why? Because there are many stories of people who recall their past lives with incredible detail once they have come into a new life. This relates because it is consciousness once again, non local it appears, carrying information from other states of being or ‘places’.
How would life be if we all knew reincarnation was real? I want us to truly think about how our lives and world would be different. Would we take small things that cause so much suffering as seriously? Is it the fact we think this is our only life that causes some of us to take things so seriously? Or is it something else? I ask because this question can help us to discover the root of so much of the self-imposed suffering that we place upon ourselves in life. That’s right, WE stress ourselves out, not life.
I think this is important to reflect on because I ultimately believe that we have the power to live our lives in a state of peace. Maybe not 100% of the time in our current world, but most of the time. I believe it is our lack of understanding of ourselves, our thoughts, and our ego that stops us from moving beyond suffering. The stories we tell ourselves about why we do the things we do plays a huge role as well.
I ultimately feel that if we knew we reincarnated after this life, we would still make the most of our experience here, yet would have a much lighter feel to what we’re doing. It ultimately comes down to how aligned we are with our heart and whether or not we’re doing what inspires us in each moment, as opposed to what our modern minds have been programmed to do.

When we don’t get aligned with who we truly are and what we are here to do, we often don’t feel all that great within. It almost feels like “something is missing.” This causes us to struggle a lot, make different choices, and ultimately not feel fulfilled. This is where the lack of purpose, what we call ‘laziness’ and so forth, can come from.
Interestingly, many fear that if we all knew reincarnation existed we’d suddenly sit around and do nothing, but don’t we do that already? Disguised as working jobs we don’t like and watching TV?
I feel this is important to reflect on. Alignment and self awareness… key.

OUT OF MIND » VOICES CARRY » AMAZING PEOPLE, PLACES & THINGS » Boy Miraculously Comes Back To Life After Parents Sign Papers To Donate His Organs

» UPDATE: Thomas Deegan calls us to West Virginia to take back our country . . . before the Pope goes to the United Nations and signs the papers there that will re-enslave us
» California School Board Members Mock Worried Parents, ‘I’m Gonna F**k You Up’, Adds ‘They Want Their Babysitters Back’
» Are Crop Circles A Sign Of Alien Life?
» coming back to life
» How Kindness Can Bring Back Magic Into Your Life