OUT OF MIND » THE INSANITY OF REALITY » GOVERNMENTS & THE NEW WORLD ORDER » On His Deathbed, John McCain Makes a STUNNING Confession - 'I Did What Duty Demanded...'

On His Deathbed, John McCain Makes a STUNNING Confession - 'I Did What Duty Demanded...' 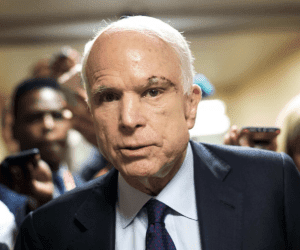 
Senator John McCain (R-AZ), who is preparing for the end of life and suffering from Stage 4 cancer, is not holding back in his final months.
Now, in his upcoming book “The Restless Wave” which will be released on May 22, McCain finally admits he is the source that gave former FBI Director James Comey the shameful, unverified dossier which was compiled by Christopher Steele, the former British intelligence officer. As we’ve now learned, that research was funded by the Hillary Clinton campaign and the Democratic National Committee, and the document was used in front of FISA judges to allow for the wiretapping of Trump campaign insiders.
This means McCain’s actions are ultimately what lead us to the ongoing Russia probe conducted by Robert Mueller.
According to The Daily Beast, the report of the stunning admission doesn’t include the fact of how the dossier was funded.
McCain’s involvement apparently happened after Steele met with American leaders in Rome to discuss his research. But what really got the ball rolling against Trump was McCain’s action of handing the dossier to Comey. McCain, as we know, is a staunch opponent of Trump’s.
This is outrageous:

McCain writes that in November 2016, he spoke with Sir Andrew Wood, a former British diplomat, at the Halifax International Security Forum. Wood alerted him to Steele’s work after which, David Kramer, senior director for Human Rights and Human Freedoms at the McCain Institute, traveled to London to meet with Steele. Prior to this, as The Washington Post reported, Steele had already met with American officials in Rome to discuss his findings.
McCain recounts how he put the dossier in a safe in his office and called Comey’s office to request a meeting: “I went to see him at his earliest convenience, handed him the dossier, explained how it had come into my possession.
“I said I didn’t know what to make of it, and I trusted the FBI would examine it carefully and investigate its claims. With that, I thanked the director and left. The entire meeting had probably not lasted longer than ten minutes. I did what duty demanded I do,” McCain concludes.

During interviews promoting his own book, Comey revealed that when he briefed Trump on the salacious details of the dossier, he never told the President his political enemies funded the investigation as opposition research.
And as The Washington Post reported in a profile of Steele, the former British intelligence officer, Steele “struggles to navigate dual obligations — to his private clients, who were paying him to help Clinton win, and to a sense of public duty born of his previous life.”

Posts : 3470
Join date : 2012-02-10
Age : 66
Location : Florida
McCain NEEDS to be hung, and, or, shot- He is a traitor to this country, and has lied about everything in his life, including his family-He left innocent people behind in 'Nam', and should pay for it with his life-Remember the saying, 'no man left behind? Apparently he didn't understand that cardinal rule-He couldn't anyway, because he doesn't have a brain- He can't die of cancer quick enough, and I really hope to see, or hear, that he has been sent to Gitmo, forever, along with OTHER unfavorables.....

I personally do not care for McCain. But, I wouldn't say or write comments like the ones you wrote (being glad he is dying of cancer). Karma is a bitch and I try to keep my distance from her.

I suggest for you to use caution when you try to piss against the wind. You are not going to like the end results.

Posts : 3470
Join date : 2012-02-10
Age : 66
Location : Florida
And WHO are you to dictate how I voice MY opinion about anyone? This man has lied all his life, maybe you should research who and what he REALLY is- I had an uncle that was in the same platoon as McCain, and he had no holding back about what he thought of the man- I didn't say I hoped 'M' died, I said he couldn't die quick enough, and if it wasn't for him, a lot would have come to light- You don't know me for me, and shouldn't point fingers about something you know little or nothing about- Study McCain, and maybe you'll understand, that many people like him have been installed in different sectors of government to destroy this country, and take from us what they can- We're ALL dying, one way or the other, just takes some longer to get there- Please keep this in mind before you think you might want to throw somebody under the bus for speaking their mind- Jesus Christ-WTF is wrong with you, anyway?

I only brought to your attention that your comments will bring you BAD KARMA.

If I used words that are hard for you to comprehend, I suggest you spend a few hours a day, opening a book and try to expand your education.

In simpler words: When you wish "pain" to a fellow human being, regardless of what you think about him or her, the hatred will come back to you two fold.

Admin
Posts : 106749
Join date : 2012-01-04
Location : Woodstock Nation
OK... we are all free to express our opinions here, respectfully please.
McCain is a douchebag of a human but I wish he did not have cancer, if he really does, so he would be around to be prosecuted for his part in the crimes against humanity. Does the US still do public hangings? Because that would be post worthy imo.

Posts : 3470
Join date : 2012-02-10
Age : 66
Location : Florida
Anenro, I struck a nerve, 'eh? Maybe follow your own advice- Don't come off holier than thou-Purpleskyz, thank you!!I guess some peeps opinions are worth more than others-And Karma? I've had enough of that to last me a lifetime....

Sooo, do we feel better now?  I have no issues with the manner you chose to express your opinion as we share similar views. As a veteran myself I despise the man and can hardly keep from vomiting when I think of how he has been praised and honored as a war hero, instead of a firing squad.  I also think my friend that perhaps you may have just a tad, overacted with ANENRO. Though it's not my intention to speak for either of you, but perhaps ANENRO's reference to Karma was merely out of concern for you rather than just a criticism.  Just a thought...

I would like to wish to one and all, a great weekend.

OUT OF MIND » THE INSANITY OF REALITY » GOVERNMENTS & THE NEW WORLD ORDER » On His Deathbed, John McCain Makes a STUNNING Confession - 'I Did What Duty Demanded...'