OUT OF MIND » TRUTH IN CONSPIRACY THEORIES? » HISTORIES MYSTERIES » Hoard of Scrolls and Artifacts Discovered in Antique Japanese Statuette

Hoard of Scrolls and Artifacts Discovered in Antique Japanese Statuette

Hoard of Scrolls and Artifacts Discovered in Antique Japanese Statuette Mon May 14, 2018 12:26 pm

Hoard of Scrolls and Artifacts Discovered in Antique Japanese Statuette 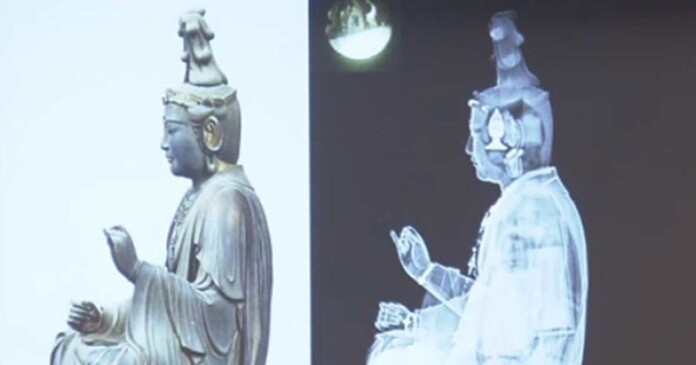 According to the Japanese State Broadcaster NHK, experts have made an astonishing discovery in a Buddhist statuette in Japan. Investigators, from the Nara National University examined the statuette and they were amazed to discover some 180 artifacts inside the object, that is usually kept at the Hokkeji Temple in the ancient Japanese capital of Nara. Some 150 artifacts – mainly scrolls – were discovered in the body of the statuette and another thirty in its head. This raises the question as to why the items were apparently hidden in a statuette and forgotten. Not even the head priest had any inkling that the figure contained such a treasure trove. The Statuette of the Bodhisattva

The Hokkeji Temple was built in the 8 th century AD when Buddhism was becoming very popular. At the time Nara was one of the centers of Buddhist activity in Japan. The temple is home to many treasures and the statue with the hoard of artifacts is just one of the many rare and precious objects housed at the site.
The statuette portrays Monju Bosatsu, a Bodhisattva, that is a person who has elected not to enter Nirvana or to become a Buddha, in order to help humanity to escape suffering. The statue is believed to be approximately seven centuries old and has been in the possession of the temple for many years. The statuette of Monju Bosatsu only stands at 73 cm or 30 inches high. The statuette of the Bodhisattva, Nara National Museum (Image: NHK Newsline Screenshot )
Monju Bosatsu is associated with wisdom and is venerated for his ability to help individuals to become enlightened and is usually depicted as a youth. He is often portrayed with scrolls, and with a sword in his hand, symbolizing his ability to cut through ignorance and illusions.  The Bodhisattva is venerated as one of the four great bodhisattvas and has been depicted in Buddhist art in many countries in East Asia. Statue of Monju Bosatsuin Jyorenji , Japan. ( CC BY-SA 4.0 )
Based on a close examination of the statuette Japanese experts were certain that the figure of the Bodhisattva contained some artifacts or scrolls. It was quite a common practice for items and even mummies to be placed in Buddhist statues, all over Asia. After consulting with the head priest and others at the Hokkeji Temple a group of local experts, were granted permission to examine the precious statuette, on condition that they did not damage the object.

Discovery of the Artifacts

The team from the Nara National University used a CT scanner to examine what was in the statuette and this allowed them to see inside the figure of the Bodhisattva.  The investigators discovered that there was a hollow space in the statute from its bottom to its top. The scan revealed the hoard that was contained in the figure and which they believe had not seen the light in many centuries. Officials believe that the artifacts and scrolls have never been removed from the statuette, they have yet to determine how they were placed in the interior of the figure of the Bodhisattva. The whole body and head of the statue can be seen to contain artifacts. How they were placed there is as yet undetermined. (Image: NHK Newsline Screenshot )
According to Shigeki Iwata, from the Nara National the figure is now a major historical object and the discovery of the artifacts has increased ” its value as a cultural asset .” Now because of the hoard the statuette is set to become a very popular attraction.  The scan has suddenly turned the figure of Monju Bosatsu into something of a mystery and an object of great curiosity. The figurine is at present on display for a limited period at the Nara National Museum.
The find of the artifacts has raised an important issue for the investigating team and for the temple. The items are undoubtedly of great historic and archaeological interest, but they cannot be examined at present as they are sealed inside the statuette of Monju Bosatsu.  There is a dilemma for the team. Do they damage a rare statuette to reveal the hoard to the world, or do they simply leave the scrolls and objects where they are? According to Newsweek ‘whether scientists will crack into the figurine to reveal the artifacts inside remains to be seen’.
It seems unlikely that anyone will establish why the artifacts were placed in the statuette and their exact nature for some time to come.
Top image: CT scan of Monju Bosatsu statue conducted by Nara National University. Source: NHK News screenshot
By Ed Whelan

Ed Whelan
My name is Edward Whelan and I am from Limerick in the Republic of Ireland. I have a lifelong love of history and have been fascinated by the subject from an early age. I attended the University of Maynooth 2003-2008… Read More

OUT OF MIND » TRUTH IN CONSPIRACY THEORIES? » HISTORIES MYSTERIES » Hoard of Scrolls and Artifacts Discovered in Antique Japanese Statuette