Spectacular Ships Dock and Decloak Over Mt. Rainier on an Early Autumn Day

Spectacular Ships Dock and Decloak Over Mt. Rainier on an Early Autumn Day

I had an inkling something
extraordinary was in the air. I just felt it. I had been expecting them
to show up for quite some time now. And apparently, this was to be the
day.

I wasn't doing anything special on this
day. Just driving from the grocery store on my way home at around
5:30 PM on a late Friday afternoon, September 28, 2012.

But as I took the left turn heading
down the street where I live, I caught a glimpse of a positively
magnificent scene unfolding in front of me. There it was –– big as
life.

That's how the mountain hits you. At
least, that's always how it hits me. No matter how many times I have
seen it before, Mount Rainier never fails to fill me with awe due to its
utterly mammoth size. It literally towers over everything in the
Pacific Northwest area like some sort of monolithic giant bursting
through the ground to rule over all its territory. It is something to
see.

But it was more than simply the
mountain which caught my attention this late afternoon. There was
something more amazing going on over and around the mountain. I could sense it. And I could feel it.

As I made that left turn, I could see
the mountain framed by the rows of large fir trees on either side of
the road. However, for the moment, I could only catch a glimpse of the
peak and as I did, suddenly I got several very clear messages pouring
into my head which told me in no uncertainty I needed to go and get a
better look. These messages were insistent and they were constant.

There was little doubt now. I knew
immediately I had to race as home as fast as possible and grab my video
camera. And that's precisely what I did.

As I pulled into my driveway, I ran
inside leaving the groceries in the car and headed right back out,
camera in tow. I was determined to find an unobstructed view before I
missed this quite extraordinary scene taking place. But I knew I must
hurry.

I drove around for about 20 minutes
desperately looking for a safe place to park my car so I could get out
and set up the camera and tripod. I was getting frustrated.

Finally, after much searching, I found a
good spot on the bend of road in front of an enormous farm field with a
clean, clear view of the mountain –– save for a few very tall blades of
grass on the side of the road.

And there they were.

So magnificent in their glory. So
breathtaking in their form. Four or perhaps five absolutely gigantic
cloud ships docking over Mt. Rainier on this glorious late September
day. 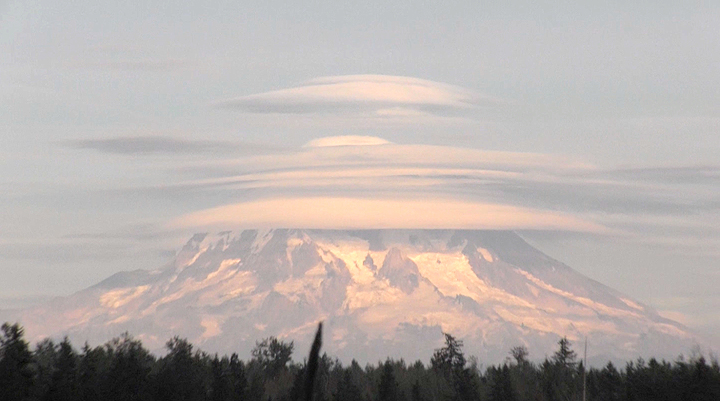 Ships docking over Mt. Rainier #1 - September 28, 2012 (Click to enlarge)
They were a sight to behold. I took a
deep breath just taking in all of the amazing scene before my eyes. It
was spectacular! It was awe-inspiring!

Although the weather was perfect and the sight line was crystal clear, the light was fading quickly.

I parked the car off to the side of the
road and grabbed the camera. There was no safe place to set up the
tripod so I just had to wing it as I held the camera with both hands
vainly attempting to steady it. 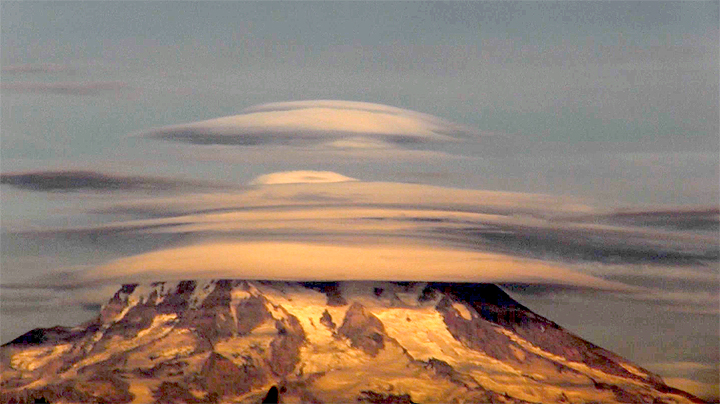 Ships docking over Mt. Rainier #2 - September 28, 2012 (Click to enlarge)
I managed to film for a few minutes.
The scene was surreal. The spot I had chosen was not quite ideal to
observe but the messages kept coming in telling me I needed to see
this. I needed to be a part of this. I needed to be here now.

So here I was. Watching as the ships revealed themselves in slow motion coming into form.

With my car behind me still sticking
halfway out into the narrow back country road with traffic coming in
both directions, I knew I couldn't stay too long. I zoomed into the
mountain with the camera a couple of times before packing up and driving
down to the end of the road so I could double back.

I hung out at the lake at the dead end for a few
minutes before returning to the open farm field yet again. When I
arrived back, I was even more amazed as the ships had taken on an even
more pronounced form all within the time frame of about ten minutes.
They were even more beautiful. They were even more spectacular. 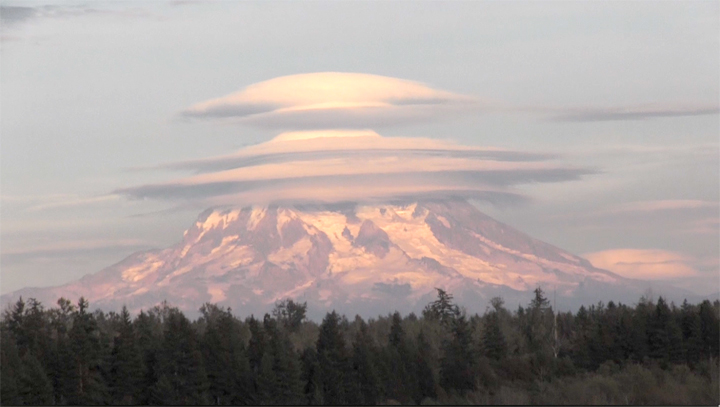 Ships docking and decloaking over Mt. Rainier #5 - September 28, 2012 (Click to enlarge)
So I pulled over yet again, got the camera out and began filming. I was soon to discover it was worth all the time and effort.

I watched in amazement as the ships
seemed to be leaving little doubt of their true origin. These certainly
looked every bit like the real deal. It was as if the ships were
decloaking themselves right before me. And I was supposed to see it all
happen right then and there.

I have seen cloud ships before over the mountain many times
but these were different. They were far more detailed and more
saucer-shaped than anything I had witnessed previously. The whole
experience felt like a close encounter of the third kind as I watched
the ships increasingly take on their signature UFO form directly in
front of me. It was very exciting indeed. 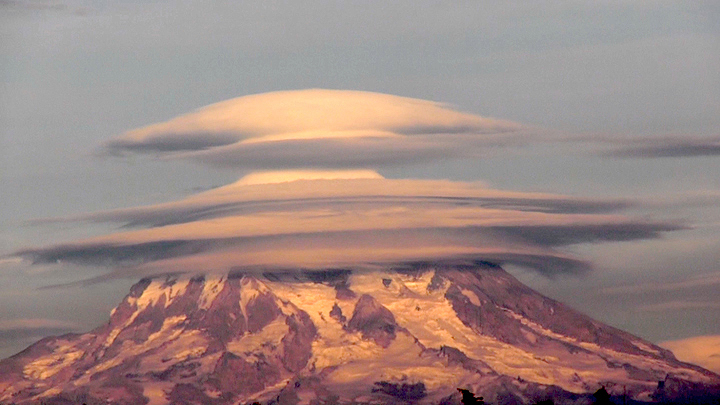 Ships docking and decloaking over Mt. Rainier #4 - September 28, 2012 (Click to enlarge)
I was really in state of wonder and
felt so fortunate to have been able to be witnessing this amazing scene
unfold before me. I stayed as long as I could observing the ships
docking over the mountain with all the grace and beauty of an
otherworldly phenomenon.

There was an intelligence going on
within the clouds. I could feel it. They were communicating to me and
showing me they were beyond the work of Mother Nature. These were
clearly not of this Earth yet at the same time were in perfect harmony
with the Earth.

The entire experience left me with even more of a yearning.

For quite some time now, I have had a
longing to communicate with advanced ET races and have requested on
numerous occasions for direct contact. I have to admit, I often pray at
night for a close encounter before drifting off to sleep.

Perhaps, many of you reading this blog
may know of the feelings I speak of. You may have had similar feelings
for an encounter with extra-terrestrial races or other highly advanced
beings, as well.

This much I am sure of. Our time is
coming. We are getting very close to the point where encounters will
begin to rise dramatically. If you are ready, perhaps you may have an
encounter too.

Many have speculated the close of 2012
–– a mere four months away as I write these words –– will mark the end
of the quarantine which has been imposed around the Earth. At that point
in time, the ET's will be free to interact with the people of the Earth
on a regular basis with the quarantine permanently lifted.

I say, bring it on. Let's do it. Let's get this party started.

With each passing day we are moving
closer to that reality. Many are likely already having direct encounters
with ET's which go unreported in the news or even on the internet. Yet
it is becoming more and more difficult to maintain the absurd truth
embargo which has told us we are alone in the universe. Just check out YouTube and see all the numerous UFO videos posted on a daily basis.

For me, I have to say all-in-all this
experience observing ships dock and decloak over Mt. Rainier felt like a
dress rehearsal. With much more yet to come.

I can hardly wait!