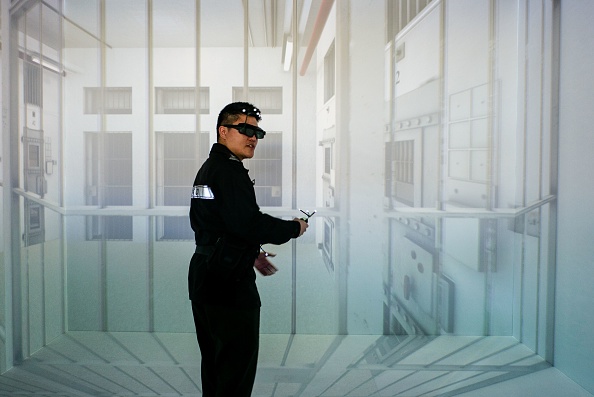 A Correctional Services Department officer interacts with a virtual reality training exercise program during a demonstration for the media at the CSD Staff Training Institute in the district of Stanley in Hong Kong on Feb. 27. (ANTHONY WALLACE/AFP/Getty Images)
Share[url=https://twitter.com/intent/tweet?text=Chinese Communist Party Sets Up VR Technology for Testing Party Members%E2%80%99]Tweet[/url]Share[email=?subject=Chinese Communist Party Sets Up VR Technology for Testing Party Members’]Email[/email]
The Chinese Communist Party has devised a new high-tech method of testing Party members’ loyalty: using virtual reality.
In the town of Qingyang in Zouping County, Shandong Province, the local authorities have established the country’s first VR center for ensuring that Party members maintain the “Party spirit.”
According to a May 6 report by the Shandong-based Bingzhou Times, Party members undergo a “Party spirit physical examination” by putting on VR glasses and headphones. They enter a virtual room. There, they are prompted with questions, which they answer using a remote control. After the test, the results are printed in another room. Based on their scores, the center will judge where Party members are lacking in loyalty.
“Problematic” members are required to receive a “diagnosis education” from officials at local Party schools or administered by local Party committees.
Local authorities invested more than 700,000 yuan ($109,904) in the center, which opened in April. It includes a Party spirit “education center,” “VR physical examination center,” “diagnosis center,” “rehabilitation center,” “quality control center,” and “internet service center.”

The news prompted strong reactions among Chinese netizens, who mocked Communist officials as “sick,” “frightening,” and “delusional.”
One said the Chinese regime has “gone crazy before meeting its demise.” Another said ironically, “Perhaps the lie detector is more effective for them.” Another said, “The next step is inserting clips into their brains.”
NTD staff member Chen Yuanhui contributed to this report.

» The Democratic Party is the Dark Winter (but so is the Republican Party)
» Chinese ‘Artificial Sun’ Experimental Fusion Reactor Sets New World Record
» USAF Has Been Quietly Testing Alien Technology at Nellis AFB
» Newfound Ancient Chinese Statues Depict Unknown Technology
» Chinese Box Exposed:"It can now be reported that elements of the Chinese military are set to decapitate the current Chinese government aka their Politburo"