Assange to be expelled from London Embassy? by Stephen Lendman 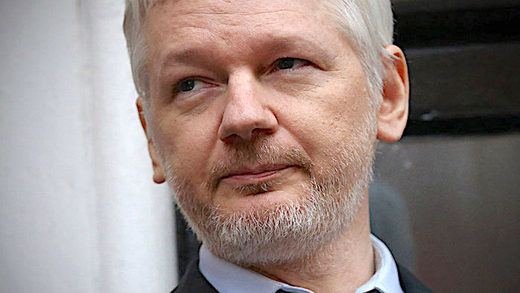 Getty Images
Julian Assange
In August 2012, Ecuador granted WikiLeaks founder, director and editor-in-chief Julian Assange asylum in its London embassy – granting him citizenship in December 2017. He’s been there since June 2012. If he steps out of the embassy, Washington wants him arrested and extradited to America.
Whistleblowers exposing government wrongdoing are endangered in the US. Anyone exposing its high crimes and/or other dirty secrets is vulnerable. Challenging the nation’s policies, no matter how heinous, risks severe punishment.
As CIA director, neocon extremist Mike Pompeo falsely accused Assange of causing “great harm to our nation’s national security.” He lied calling WikiLeaks “a non-state hostile intelligence service often abetted by state actors like Russia.” [all article emphasis added]
In 2012, a secret grand jury convened. A sealed indictment followed, allegedly accusing Assange of spying under the long ago outdated 1917 Espionage Act, enacted shortly after America’s entry into WW I – used to prosecute, convict and imprison Chelsea Manning.
Neocon Attorney General Jeff Sessions prioritizes arresting, prosecuting and imprisoning Assange, earlier saying: “(I)t is a priority. We’ve already begun to step up our efforts and whenever a case can be made, we will seek to put some people in jail” like Assange for whistleblowing.
In late March, his Internet access was cut off. New restrictions limit his outside communications – his phone privileges and visits from colleagues and others banned, according to WikiLeaks.
Last Wednesday, Ecuadorean Foreign Minister Fernanda Espinosa said talks between her government and Britain are ongoing to decide Assange’s fate, adding: “There is a dialogue. There is a will and an interest to move forward in the solution of that matter.”
Britain refused to grant Assange diplomatic status or legal immunity as an Ecuadorean citizen, allowing him to leave the embassy without fear of arrest and extradition to America.
If expelled from the embassy, it’s virtually certain. Washington wants him arrested, prosecuted, imprisoned and silenced.
WikiLeaks publishes countless volumes of leaked US documents and other damning material, exposing imperial lawlessness by America and its rogue allies, along with other information everyone has a right to know.
According to UK-based lawyer Jennifer Robinson, Assange’s“health situation is terrible. He’s had a problem with his shoulder for a very long time. It requires an MRI, which cannot be done within the embassy. He’s got dental issues. And then there’s the long-term impact of not being outside, his visual impairment. He wouldn’t be able to see further than from here to the end of this hallway.”
WikiLeaks is involved in whistleblowing investigative journalism, publishing material supplied by sources, unidentified for their protection. It’s not an intelligence operation – nor it it connected to Russia or any other country.
Earlier Assange said WikiLeaks has the right “to publish newsworthy content. Consistent with the US Constitution, we publish material that we can confirm to be true…”
Media freedom in America and other Western societies is threatened. If Assange and WikiLeaks are silenced, it’ll be another blow to truth-telling on vital issues at a time it’s vitally needed.
Independent journalism is essential to protect and preserve. Doing the right thing has risks. The rewards are priceless.
Stephen Lendman is editor and contributor to a new book titled Flashpoint in Ukraine: How the US Drive for Hegemony Risks WW III.
Related: Ecuador makes ready to hand Julian Assange over to the UK

From Doreen: Rather than focus on Caitlin Johnstone let’s focus on the issue:


It’s all about cognitive dissonance. Many of us bump up against this dissonance every single day of our lives. Or else, we live with people who wilfully refuse to look at the world and what is going on in it, as Hannah Arendt suggested. How many will choose to recognize this huge problem? Besides recognizing it and allowing it, is there any other way to deal with it? At the moment, the bigger question to me is: Will We Allow Assange to Die?

“I’ll tell you what else is dying – common decency, respect, compassion, consideration for others, dignity, honesty, integrity, positive patriotism, credibility, kindness, manners, social norms and mores,” tweeted a former Detective Superintendent of London’s Metropolitan Police Service in response to a news story about a White House official making light of Senator John McCain’s death.
SOURCE with thanks https://jhaines6.wordpress.com/2018/05/15/free-julian-assange-now-may-15-2018-afternoon-news/
From Doreen
Why is there enforcement against whistle blowers who risk their lives telling the truth, yet no enforcement to stop crimes against humanity, and those who disappear whistle blowers?
Why is Nazi promoted unnatural frequency 440 hertz used instead of natural frequency 432 hertz intuitive music?

https://ourgreaterdestiny.wordpress.com/2016/12/05/why-is-432-hz-better-than-440-hz-read-listen-benefit-naturally/
Why are incandescent lights being phased out and replaced with  LED lights that suppress melatonin production required for effective immunity and optimal health? Because of alleged climate change, based on incomplete science and omission of geoengineering that blocks sunlight and has banished normal weather. https://globalnews.ca/news/4122605/led-street-lights-eyesight-health-effects/

EMF and EMR from wireless technology also suppress melatonin production. https://ourgreaterdestiny.wordpress.com/2018/05/14/unlock-the-gateway-to-collective-consciousness/
Why are 5G threats to human health and other life forms hidden?

https://ourgreaterdestiny.wordpress.com/2018/05/15/sprint-adds-nyc-phoenix-kansas-city-to-its-initial-5g-rollout-list/
Why are planes discharging chemicals to block sunlight vital to many kingdoms, and that contaminate food, water and air?