The Friendly Mask of the Orwellian Oligarchy Is Slipping Off

Admin
Posts : 106797
Join date : 2012-01-04
Location : Woodstock Nation
The Friendly Mask of the Orwellian Oligarchy Is Slipping Off
The Mind Unleashed

Gina Haspel has been confirmed as America’s new CIA Director, fulfilling her predecessor Mike Pompeo’s pledge to turn the CIA into “a much more vicious agency”. “Bloody Gina” has reportedly been directly involved in both torturing people and destroying evidence of torture in her long and depraved career, which some say hurts the CIA’s reputation.
Others say it just makes it more honest.
The lying, torturing, propagandizing, drug trafficking, coup-staging, warmongering Central Intelligence Agency has done some of the most unspeakably horrific things to human beings that have ever happened in the history of our species. If you think I’m exaggerating, do your own research into into some of the CIA’s activities like the Phoenix Program, which used “Rape, gang rape, rape using eels, snakes, or hard objects, and rape followed by murder; electric shock (‘the Bell Telephone Hour’) rendered by attaching wires to the genitals or other sensitive parts of the body, like the tongue; the ‘water treatment’; the ‘airplane’ in which the prisoner’s arms were tied behind the back, and the rope looped over a hook on the ceiling, suspending the prisoner in midair, after which he or she was beaten; beatings with rubber hoses and whips; the use of police dogs to maul prisoners,” and “The use of the insertion of the 6-inch dowel into the canal of one of my detainee’s ears, and the tapping through the brain until dead. The starvation to death (in a cage), of a Vietnamese woman who was suspected of being part of the local political education cadre in one of the local villages…The use of electronic gear such as sealed telephones attached to…both the women’s vaginas and men’s testicles [to] shock them into submission.”
This is what the CIA is. This is what the CIA has always been. This is what Mike Pompeo said he wanted to help make the CIA “much more vicious” than. Appointing Gina Haspel as head of the agency is just putting an honest face on it.

It really couldn’t be more fitting that the US now has an actual, literal torturer as the head of the CIA. It also couldn’t be more fitting that it has a reality TV star billionaire President, an Iraq-raping Bush-era neoconservative psychopath as National Security Advisor, a former defense industry director as Secretary of Defense, a former Goldman Sachs executive as Secretary Treasurer, and a former Rothschild, Inc. executive as Secretary of Commerce. These positions have always facilitated torture, oppression, war profiteering and Wall Street greed; the only thing that has changed is that they now have a more honest face on them.
The mask of the nationless Orwellian oligarchy which dominates our world is slipping off all over the place.
Israel is now openly massacring unarmed Palestinian civilians, prompting a UN investigation into possible war crimes. Only two nations voted in opposition to the investigation, and surprise surprise it was the two nations apart from Israel who most clearly owe their existence to the institutionalized slaughter and brutalization of their indigenous occupants in recent history: the US and Australia. All other members of the UN Human Rights Council either voted in support of the investigation or abstained.

Internet censorship is becoming more and more brazen as our governments become increasingly concerned that we are developing the wrong kinds of political opinions. Ever since the establishment Douma and Skripal narratives failed to take hold effectively, we’ve been seeing more and more frantic attempts to seize control of public discourse. Two weeks after the Atlantic Council explained to us that we need to be propagandized by our governments for our own good, Facebook finally made the marriage of Silicon Valley and the western war machine official by announcing a partnership with the Atlantic Council to ensure that we are all receiving properly authorized information.

The Atlantic Council is pure corruption, funded by powerful oligarchs, NATO, the US State Department, empire-aligned Gulf states and the military-industrial complex. Many threads of the establishment anti-Russia narrative trace back to this highly influential think tank, from the DNC hack to the discredited war propaganda firm Bellingcat to imaginary Russian trolls to the notorious McCarthyite PropOrNot blacklist publicized by the Washington Post. Facebook involving itself with this malignant warmongering psyop factory constitutes an open admission that the social media site considers it its duty to manipulate people into supporting the agendas of the western empire.
We’re seeing similar manipulations in Twitter, which recently announced that it will be hiding posts by more controversial accounts, and by Wikipedia, which has been brazenly editing the entries of anti-imperialist activists with a cartoonishly pro-establishment slant. 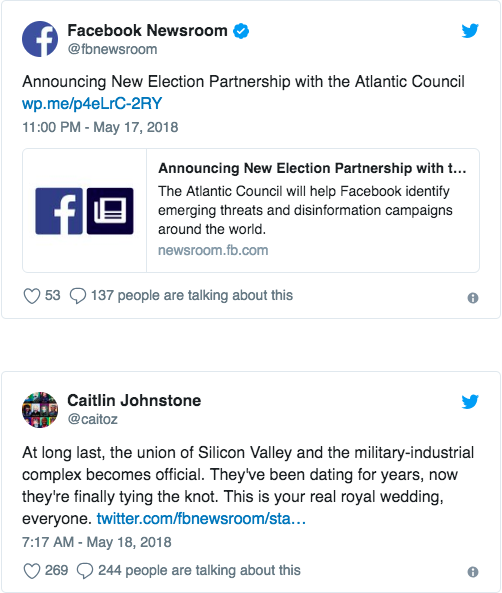 It is always a good sign when people in power become concerned that their subjects are developing the wrong kinds of political opinions, because it means that truth is winning. All this gibberish we’ve been hearing about “Russian disinformation” and “Russian propaganda” is just a label that has been pinned on dissenting narratives by a mass media propaganda machine that has lost control of the narrative.
And this is why it’s getting so overt, barely even attempting to conceal its true nature anymore. Our species’ newfound ability to network and share information has enabled a degree of free thinking that the cultural engineers did not anticipate and have not been able to stay ahead of, and they’re being forced to make more and more overt grabs to try and force us all back into our assigned brain boxes.

But the oligarchs who rule us and their Orwellian power structure is already in a lose-lose situation, because the empire that they have built for themselves rests upon the illusion of freedom and democracy. The most powerful rulers of our world long ago eschewed the old model of sitting on thrones and executing dissidents in the town square, instead taking on a hidden role of influence behind the official elected governments and using mass media propaganda to manufacture the consent of the governed.

This system is far more efficient than the old model because a populace will never rebel against rulers it doesn’t know exist, and it has enabled the western oligarchs to amass more power and influence than the kings of old ever dreamed possible. But it has a weakness: they have to control the narrative, and if they fail to do that they can’t switch to overt totalitarianism without shattering the illusion of freedom and provoking a massive public uprising.
So the wealth-holding manipulators are stuck between a rock and a hard place now, trying to use new media outlets like Facebook, Twitter and Wikipedia to herd the unwashed masses back into their pens. The more brazen they get with those manipulations, however, the more the mask slips off, and the greater the risk of the public realizing that they aren’t actually free from tyrannical rule and exploitation.
The real currency of this world is not backed by gold, nor by oil, nor by bureaucratic fiat, nor even by direct military might. No, the real currency of this world is narrative, and the ability to control it. The difference between those who rule this world and those who don’t is that those who rule understand this distinction and are sufficiently sociopathic to exploit it for their own benefit.

Power only exists where it exists because of the stories that humans agree to tell one another. The idea that government operates a certain way, that money operates a certain way, these things are purely conceptual constructs that are only as true as people pretend they are. Everyone could agree tomorrow that Donald Glover is the undisputed King of America and the new official US currency is old America Online trial CDs if they wanted to, and since that was the new dominant narrative it would be the reality. Everyone could also agree to create a new system which benefits all of humanity instead of a few sociopathic plutocrats. The only thing keeping money and government moving in a way that benefits our current rulers is the fact that those rulers have been successful in controlling the narrative.
They’ll never get that cat back into the bag once it’s out, and they know it. We the people will be able to create our own narratives and write our own rules about how things like money and government ought to operate, and there is no way that will work out to the benefit of the ruling manipulators and deceivers. So they fight with increasing aggression to lull us back to sleep, often overextending themselves and behaving in a way that gives the public a glimpse behind the mask of this entire corrupt power structure. Someday soon that mask will slip right off and come crashing to the floor. That crash will wake the baby, and that baby will not go back to sleep.
Op-ed by Caitlin Johnstone / Republished with permission
Thanks to: https://themindunleashed.com

» America Celebrates Transition From Monarchy to Corporatist Oligarchy
» The Masks are Slipping as Alternative Media War Rages
» SLAVE MASK - Wearing A Mask Causes Hypoxia And Irreversible Brain Damage! plus MORE
» Hypocrisy alert! See Sen. Dianne Feinstein walk through airport without a mask after demanding mask mandates
» In an Oligarchy, Voting is a Tool to Manufacture the Illusion of Consent