Merck’s Fosamax Fraud Demonstrates How Big Pharma and CDC Spin Statistics to Sell Ineffective Vaccines and Drugs Tue May 22, 2018 10:19 am 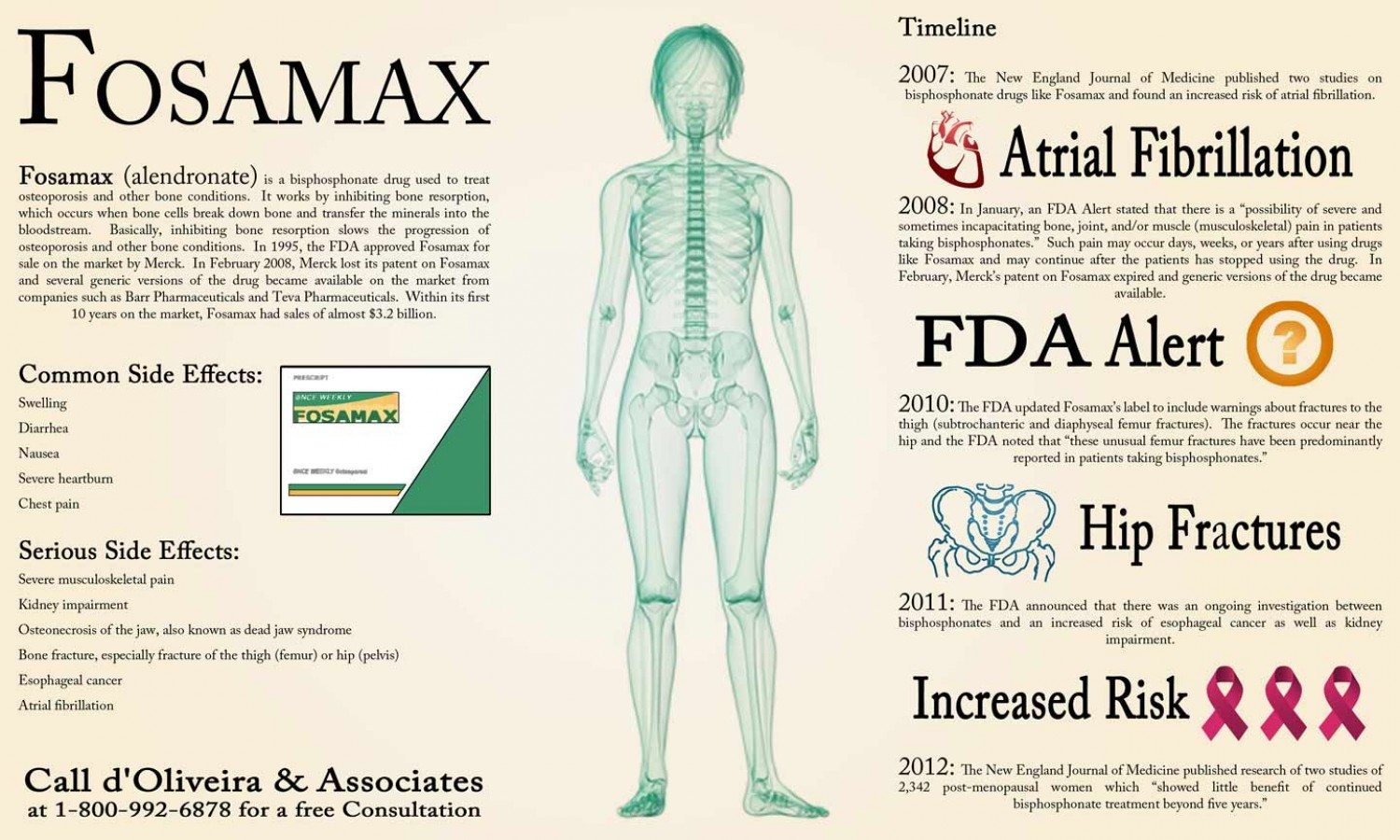 More than 4000 patients have sued Merck over injuries due to Fosamax.

Duty to Warn: Truth-telling Statistics that Big Pharma and the CDC Never Report to Physicians or Patients

by Gary G. Kohls, MD
It has been over a decade since I came to the realization that the entire profession of medicine had been bamboozled by the propaganda coming from the Big Pharma drug and vaccine maker, Merck & Company, that its so-called “fracture-preventative” drug Fosamax had defrauded us doctors and our patients by falsely claiming a “50% efficacy rate” in the prevention of bone fractures in osteopenic/osteoporotic women.
I had always been suspicious of pharmaceutical sales reps and the Big Pharma corporations that they worked for, and I had wondered exactly where they got the 50% effectiveness figure.
So I finally got around to actually digging into and studying the clinical study statistics that were in the FDA-approved product insert that all drug and vaccine makers are forced to publish and include with the product (and which only a few physicians ever take the time or inclination to read).
Lying buried among the large number of boring statistical verbiage were printed the numbers that revealed that the 50% efficacy rate for osteopenic patients who took Fosamax for four years was actually a deceptive relative risk reduction (RRR) figure that drastically deceptively over-stated the effectiveness of the drug.
By doing a little math, I understood that the honest truth of the matter was that patients who took the drug for four years had a miniscule 1-2% absolute risk reduction (AAR) in the incidence of fractures, which is a much more realistic figure that Merck, being a sociopathic entity that is inclined to tell half-truths or outright lies, chose not to use in its advertisements.
It is a fact that being truthful in the drug or vaccine industry is an impediment to selling product, because they would be admitting they were selling a lousy, fraudulent, relatively ineffective or dangerous drug or vaccine.

Incidentally Merck – and who knows how many Fosamax-prescribing doctors – are being sued by thousands of patients who have been damaged by the drug and, true to Merck’s sociopathic nature, the company continues to use delaying tactics in legally settling the 4,115 lawsuits against it from patients who suffered Fosamax-induced bone fractures.
We uninformed physicians, thanks to Merck’s deceptive tactics, ignorantly but energetically prescribed the drug for decades, thus inadvertently also deceiving our patients, some of whom suffered the permanently devastating disease called (Fosamax-induced) osteonecrosis of the jaw, an incurable disease that only came to light when thousands of dentists did otherwise standard dental extractions on Fosamax patients and then found that the extraction sites never healed, sometimes actually resulting in incurable infections, chronic pain and even fractures.
1,200 of those osteonecrosis patients are still waiting for compensation a decade or two after the connections were proven and lawsuits were filed. Sociopathic entities like Big Pharma’s drug- and vaccine-making corporations are in the habit of making cunning use of their lawyers, cruelly threatening their victims, delaying court hearings, trying to settle out of court with low-ball dollar figures and then refusing to pay court-ordered settlements until the plaintiffs give up or die. See more on the Fosamax lawsuits.
So it has come as no shock to me to discover that every Big Pharma vaccine maker has been using the same deceptive relative risk reduction statistics that Merck (and every other Big Pharma drug-maker) was using back when Fosamax was the darling money-maker of the drug and bone-imaging industries.
To really understand the Fosamax Fraud, go to my Duty to Warn column on the subject.


What is Relative Risk?

The relative risk of something happening is where you compare the odds for two groups against each other. It is usually reported as a percentage (like Fosamax allegedly reducing the risk of bone fracture by 50% if the drug is taken for four years). Although relative risk does provide some information about risk, it doesn’t say anything about the actual odds of something happening; on the other hand, absolute risk does.

The RRR is a statistic indicating how much risk is reduced in an experimental group compared to a control group. It is always a gross over-exaggeration of the actual efficacy of a treatment, and is therefore favored by drug and vaccine corporations and clinics and physicians who want to promote a product. The AAR statistic is, in contrast, a taboo subject, because it is too truthful.


What is Absolute Risk Reduction (AAR)?

Absolute risk reduction is the absolute difference in outcomes between a control group and the group receiving treatment. The percentage tells you how much the risk of something happening decreases if a certain intervention happens.


What is the NNT?

One can see how using the RRR to describe the potential effect of a treatment would be enticing, particularly if someone wanted to exaggerate the potential benefit of a treatment.
This is where the NNT becomes most valuable: as a tool to standardize communication. The NNT only uses the ARR and therefore when patients and doctors use the NNT there is no deception or exaggeration of impact. The concept of the NNT is highly intuitive, and once trained in its use, easy for most to understand.
The core value of the NNT is its straightforward communication of the science that can help us understand the likelihood that a patient will be helped, harmed, or unaffected by a treatment.
The Number Needed to Vaccinate (NNV) is similar to the NNT, in that it says, in one phrase, how many patients will need to be vaccinated for one patient to benefit. The larger the number, the worse the efficacy of the vaccine (or drug). A few examples are listed below:

Many of these examples come from the literature, including some from this source. Statistics such as these can be expected to vary according to location, age, chronic illnesses, nutritional status, etc.
Googling Number Needed to Vaccinate is useful, although the CDC references should be viewed with a large amount of skepticism, because the close financial and collegial relationships between the CDC and Big Pharma create huge conflicts of interest.


NNV for Infant Flu Vaccine to Prevent One Hospitalization = >4,255


NNV for Shingles/Herpes Zoster vaccination for over 70 years = 231


Live attenuated varicella-zoster vaccine: Is it worth it?

BMC Infectious Diseases 2008:53
The impact and effectiveness of (23 valent) pneumococcal vaccination in Scotland for those aged 65 and over during winter 2003/2004


NNV to Prevent one Health Adult from Experiencing Influenza = 71

The following NNTs are for low risk patients who took statins for 5 years (and whose only risk was elevated cholesterol but no documented coronary artery disease) compared to patients of similar low risk that did not take statins:
The NNT to prevent one heart attack: – 104
The NNT to prevent one stroke: 154
The NNH (number needed to harm) for developing rhabdomyonecrosis of the heart = 10
Cochrane Database Syst Rev. 2011 Jan 19;(1):CD004816


Statins for the primary prevention of cardiovascular disease

Dr Kohls is a retired physician from Duluth, MN, USA. He writes a weekly column for the Duluth Reader, the area’s alternative newsweekly magazine. His columns deal with the dangers of American fascism, corporatism, militarism, racism, malnutrition, Big Pharma’s psychiatric drugging and over-vaccination regimens, and other movements that threaten the environment, prosperity, democracy, civility and the health and longevity of the planet and the populace.
Many of his columns are archived at Global Research, Duluth Reader, and Transcend Media Service.