Tommy Robinson
Robinson, 35, was arrested in the UK on Friday for suspicion of breaching the peace while livestreaming a report on the trial of a child grooming gang. He is now serving a prior 13 month suspended sentence for a similar offense.
In this dystopian nightmare, the father and husband was transported to jail to begin his sentence just hours after his arrest — without the ability to appeal the judge’s decision.
Supporters of Robinson immediately called for a protest to take place the following day and hundreds have answered the call.
The UK government had attempted to silence any conversation about his situation by issuing a ban against the press covering the case. Unfortunately for their plan, they cannot control social media and their effort appears to have had a Streisand Effect.

Articles from the Daily Record, Birmingham Live, The Mirror, and even Breitbart News were all taken offline in the hours following his detention.
Robinson was arrested outside the Leeds Crown Court as he was covering the trial of 29 men for offenses including child rape, trafficking, and supply of Class A drugs to children. 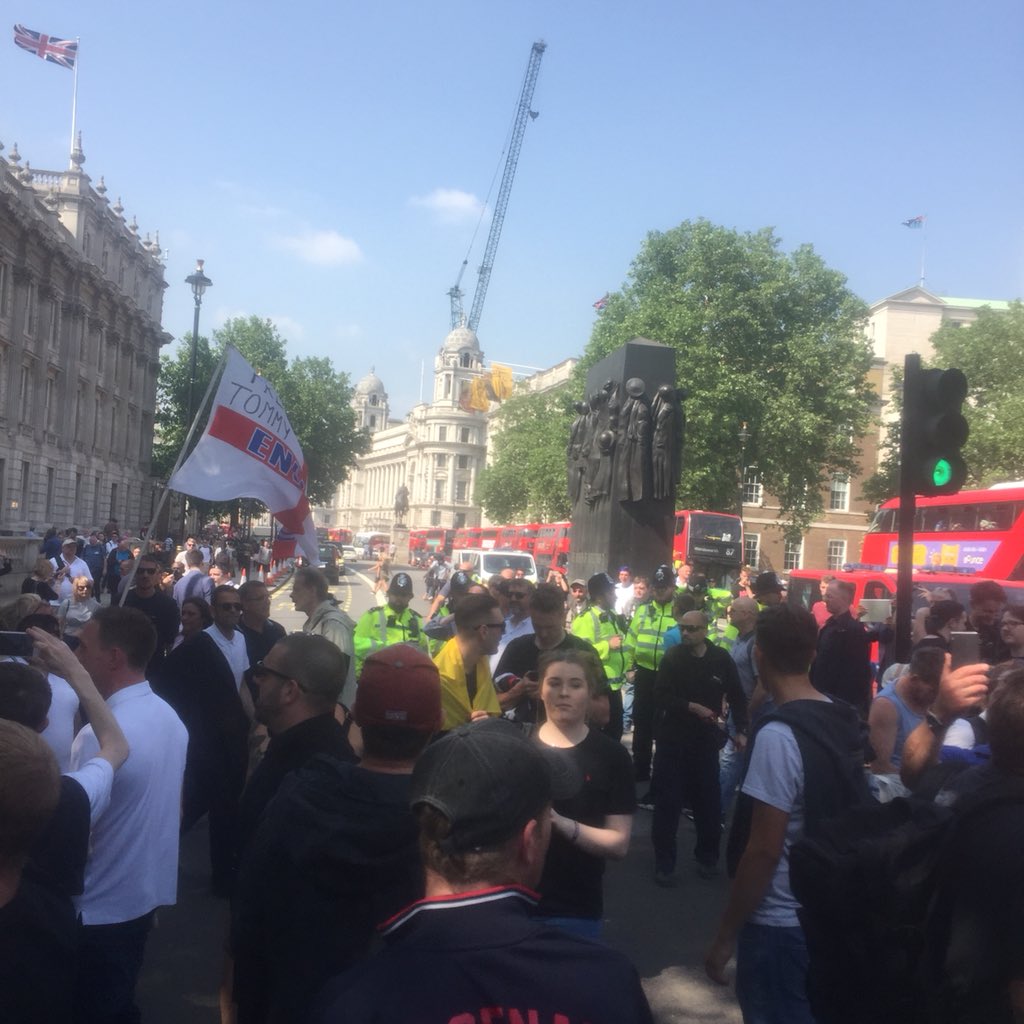 Robinson was arrested outside the Leeds Crown Court as he was covering the trial of 29 men for offenses including child rape, trafficking, and supply of Class A drugs to children.

Re: UK Protesters Flood the Streets to Demand the Release of Imprisoned Journalist Tommy Robinson Sun May 27, 2018 9:39 am

This site uses cookies for analytics, personalized content and ads. By continuing to browse this site, you agree to this use. Learn more

Provided by Independent Print Limited Hundreds of far-right protesters have descended on Whitehall to demonstrate against Tommy Robinson’s arrest for 'breaching the peace' outside a courthouse.
Whitehall had to be closed to traffic as a huge group gathered outside Downing Street on Saturday afternoon, chanting Mr Robinson’s name.
It comes after the founder of the English Defence League was apprehended by police while streaming a Facebook live video outside a grooming trial in Leeds on Friday morning.
In the footage, he can be seen being led to the back of a van and asking “Am I being arrested? I'm 'causing a breach of peace'...I'm being arrested for breaching the peace.”

Whitehall at a standstill. I imagine won't be on the news #FreeTommypic.twitter.com/S9IVLmn7J6
— algernond (@algernond)
May 26, 2018

The incident has triggered a furious reaction from his fans, who could be heard chanting “shame on you” outside Whitehall.
Footage showed one man being lifted up to the top of the gates before turning to the crowd and pumping his fist.
Police officers could be seen attempting to keep the demonstration under control as violence threatened to break out at one point, with some protesters pushing officers.

Many protesters could be seen holding aloft “#FreeTommy” signs or waving flags, including the St George’s Cross, the Union Jack and the UKIP logo.
One woman held a cardboard sign which read: “Free the truth teller. Free Tommy”.

The protest later moved down the road to Parliament Square. Meanwhile, almost 70,000 people have signed a petition calling for Mr Robinson to be freed.
The Met Police said there had been no arrests.

Re: UK Protesters Flood the Streets to Demand the Release of Imprisoned Journalist Tommy Robinson Sun May 27, 2018 5:14 pm

The entities that have comprised the yookay govt over some decades have form for turning their "villains" into victims.

Despite a judge ordering a media ban crowds turned up at the gates of Downing street, some reports speak of the gates being climbed