OUT OF MIND » TRUTH IN CONSPIRACY THEORIES? » HISTORIES MYSTERIES » Why Are We Not Talking About The Reality of Giant Humanoid Skeletons? Here Are A Few Examples

Why Are We Not Talking About The Reality of Giant Humanoid Skeletons? Here Are A Few Examples

Why Are We Not Talking About The Reality of Giant Humanoid Skeletons? Here Are A Few Examples Tue May 29, 2018 9:15 am

Why Are We Not Talking About The Reality of Giant Humanoid Skeletons? Here Are A Few Examples
Richard Enos 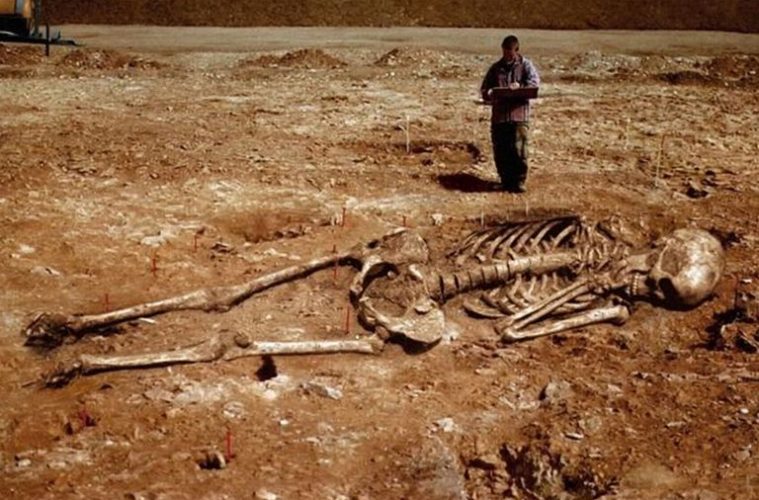 If you step back and look—truly look, with eyes open—at the way human history has been managed in recent times by the established order, you will see an unmistakable pattern.
advertisement - learn more

A certain perception has been pushed, selectively constructed from Darwin’s ‘The Origin of Species’–the notion that the human race evolved up through the apes, in an unbroken, linear pattern of growth and adaptation, predicated on random genetic mutations; additionally, that the human race as we know it is the only intelligent species to ever inhabit the planet, and has never been in direct contact with intelligent species of any other kinds.
Testimonials and evidence from the past that don’t contradict that perception of our history are commonly accepted as fact. Nobody seems to be challenging, for example, the notion that mastodons or dinosaurs once roamed the Earth.

But what about testimonials and evidence from the past that challenge this perception of our history? Say, for example, a native North American tribe claiming that their ancestors regularly dealt with giants? Stories of this nature are certainly considered to be true history by the people of the tribes themselves; but of course when they are talked about in our society, they are relegated to the status of legend, myth or folklore. Let’s look at an example from a New York Times article from 1902: 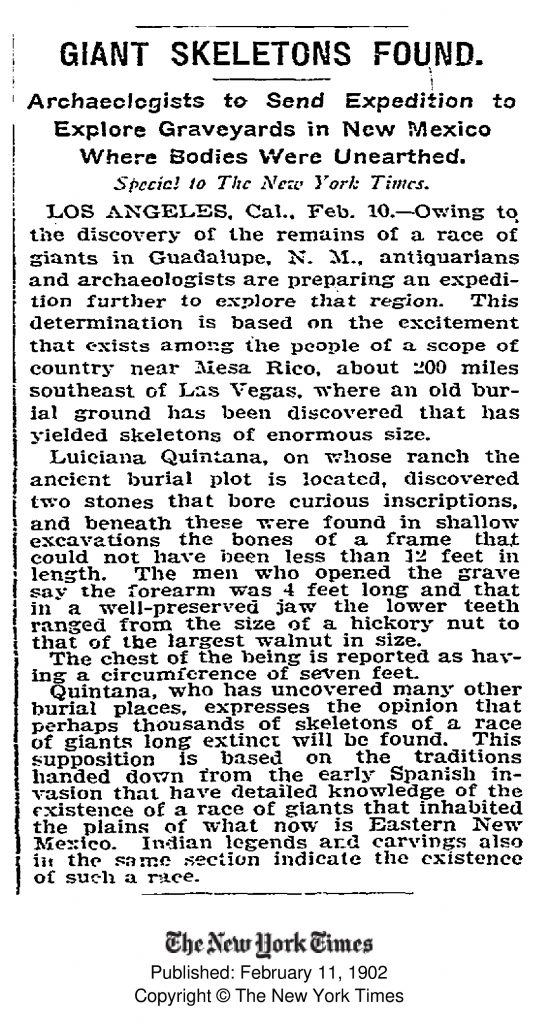 This mainstream newspaper article speaks of the discovery of giant skeletons ‘that could not have been less than 12 feet in length’ with aplomb. At that time, it seems, such events were not met with the rabid skepticism they are today. It is only after the authority swoops in to take possession of, and then hide or destroy physical evidence, such as the giant bones discovered above, that their narrative of skepticism and discrediting of native ‘legends’ takes place.
I would like to draw your attention to the fact that landowner Luciana Quintana expects to be able to find thousands of skeletons based on the historical information passed down from native tribes during early Spanish invasions that ‘have detailed knowledge of the existence of a race of giants that inhabited the plains of what now is Eastern New Mexico.’ The tone again reinforces that this information was accepted as history, not legend.
advertisement - learn more

Stories Of Giants Are Ubiquitous

Such histories are not the isolated imaginings of one native American group either. This article  alone details similar testimony from the Choctaw, Commanches, Navaho, Manta, and Paiutes. The point is that the tribes whose histories bring them back to the time when these giants were to have existed all give remarkably consistent testimony not only of their existence, but also of their appearance, customs, and behaviors. 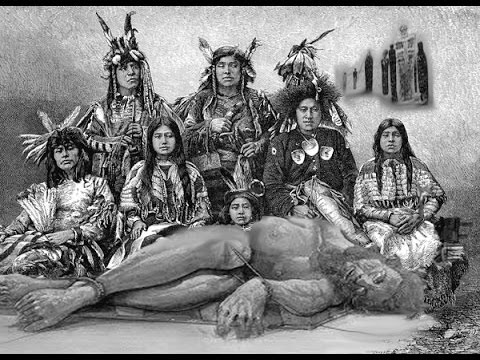 Why are we not open to view these claims as historical fact the way we do with the more uncontroversial data about the past we are provided with? For only one reason–the well-established discomfort of ‘cognitive dissonance’, a temporary mental anguish that comes from having the perception of reality we were born into threatened in our minds. And our authority uses this phenomenon to deepen the programming of their controlled perception, using fear, ridicule, shame, and other thoroughly-researched social and cultural mind-control techniques to keep us on the straight and narrow.

But before Darwin’s work on the origin of species was slowly co-opted and transformed into a random, godless universe in the early 20th century, it is quite possible that people openly accepted the possibility that giants existed in North America at some time in our past. Certainly, this reflection on Niagara Falls by Abraham Lincoln in 1848 reveals an open-eyed, serene knowledge of the presence of Giants in an earlier time:

It calls up the indefinite past. When Columbus first sought this continent—when Christ suffered on the cross—when Moses led Israel through the Red-Sea—nay, even, when Adam first came from the hand of his Maker—then as now, Niagara was roaring here. The eyes of that species of extinct giants, whose bones fill the mounds of America, have gazed on Niagara, as ours do now. Co[n]temporary with the whole race of men, and older than the first man, Niagara is strong, and fresh to-day as ten thousand years ago. The Mammoth and Mastadon—now so long dead, that fragments of their monstrous bones, alone testify, that they ever lived, have gazed on Niagara.

Likely Lincoln was familiar with the histories of many of the native tribes of his time. There is a recognition on Lincoln’s part here that the existence of giants’ bones, aplenty in burial mounds in America, is as well-accepted as the existence and Mammoths and Mastadons.
The reason that many people today do not believe in the giants of the past is the result of efforts to remove from public sight the physical evidence of giants, as part of the larger effort to remove the physical evidence of anything that does not fit the controlled perception of human history. And the reason they are trying so desperately to preserve this perception? Simply stated, and without getting into details that have been elaborated upon in some of my previous articles, this perception of our human history lends itself best to our being controlled and enslaved by our authority.

Your Inbox Will Never Be The Same

My belief in giants does not rest on physical evidence. If presented with a femur bone twice the size of a normal human being’s, and I actually held it in my hands, I wouldn’t much know what to make of it. I don’t have the means or the knowledge to test it for authenticity. I wouldn’t you be able to certify that it did not belong to a dinosaur or other animal. When we look for ‘proof’ of such things as the existence of giants, what we are really looking for is a trusted ‘expert’ to tell you what the evidence means.
My belief rather rests on all the information I see on a daily basis that demonstrates attempts to maintain a certain perception of reality, and all the bits of evidence I gather on a regular basis that the truth on many things is being systematically hidden from us. The internet itself has now become rife with these efforts towards disinformation and obfuscation.

Fake News At Its Finest

For example, I went to research the oft-heard claim that the Smithsonian Institution collected all the giant bones found in digs over the years, and then slowly got rid of them or hid them. On the first page of my Google search, I was confronted with a wall of articles which all referred back to one ‘World News Daily Report’ article entitled ‘SMITHSONIAN ADMITS TO DESTRUCTION OF THOUSANDS OF GIANT HUMAN SKELETONS IN EARLY 1900’S’.
Of course, first on the search was a Snopes article of exactly the same title that says the claim is false. And how do they argue the claim is false? Because they say there is no evidence (in the article or elsewhere) where the Smithsonian has ‘admitted’ anything of the sort. And this is actually correct. There is no such evidence. Secondly, they claim that ‘World News Daily Report’ is fake news, as follows:

World News Daily Report is a news and political satire web publication, which may or may not use real names, often in semi-real or mostly fictitious ways. All news articles contained within worldnewsdailyreport.com are fiction, and presumably fake news. Any resemblance to the truth is purely coincidental, except for all references to politicians and/or celebrities, in which case they are based on real people, but still based almost entirely in fiction.

And this is also true. World News Daily Report IS ‘Fake News’.

What We Don’t Hear

What we don’t hear, though, is how World News Daily Report, a website supposedly created by a couple of people with enough time on their hands and an inexplicably fervent desire to create ‘fake’ research stories, is actually a well-funded front for the controlled perception. WNDR and Snopes work cleverly in tandem to create a ‘too good to be true’ discreditable story about the Smithsonian Institute and giant bones TO CONVINCE ANYONE RESEARCHING THE INTERNET ON THE SUBJECT THAT IT’S ALL NONSENSE. The hope is that those people will change their minds about the Smithsonian cover-up, or at least give up in their search.
Is that not an explanation of this situation that makes the most sense?
If we want to know the truth in matters that contradict the controlled perception we are being presented with, discernment is key, now more than ever. Let’s put our stock in those we trust. Like Honest Abe Lincoln.

OUT OF MIND » TRUTH IN CONSPIRACY THEORIES? » HISTORIES MYSTERIES » Why Are We Not Talking About The Reality of Giant Humanoid Skeletons? Here Are A Few Examples