An electronic circulator keeps information moving in a certain direction, much like a roundabout. (But in a circulator, ‘traffic’ must always take the next exit after they enter.)
In the popular movie franchise “Back to the Future”, an eccentric scientist creates a time machine that runs on a flux capacitor.
Now a group of actual physicists from Australia and Switzerland have proposed a device which uses the quantum tunneling of magnetic flux around a capacitor, breaking time-reversal symmetry.
The research, published this week in Physical Review Letters, proposes a new generation of electronic circulators, which are devices that control the direction in which microwave signals move.
It represents a collaboration between two Australian Research Council Centres of Excellence: the Centre for Engineered Quantum Systems (EQUS) and the Centre for Future Low-Energy Electronics Technologies (FLEET).
FLEET Associate Investigator Professor Jared Cole (working at RMIT University) said the proposed device is built from a superconductor, in which electricity can flow without electrical resistance.
Professor Cole added, “We propose two different possible circuits, one of which resembles the iconic three-pointed-star design of the cinematic flux capacitor. (See images.)
“In it, quantum ‘tubes’ of magnetic flux can move around a central capacitor by a process known as quantum tunneling, where they overcome classically insurmountable obstacles.” 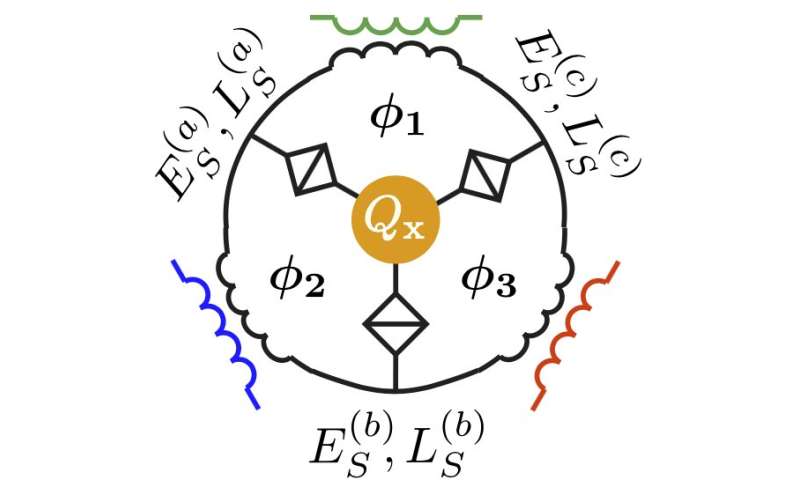 The combination of magnetic fields and electric charges leads to what the physicists call broken time-reversal symmetry.
“Unfortunately this effect does not allow us to actually travel back in time,” Professor Tom Stace (University of Queensland) said.
“Instead, it means that signals circulate around the circuit in only one direction, much like cars on a roundabout,” he said.
Such a device can be used for example to isolate parts of an experimental apparatus from each other, which is crucial when the individual parts are extremely sensitive quantum systems.
Lead author Dr Clemens Mueller (ETH Zurich) said this device is a crucial component for next-generation technologies, including the long sought-after quantum computer.
Dr Mueller said, “Our research makes an important step towards scaling up this technology, where researchers need to precisely direct control and measurement signals around a quantum computer.” 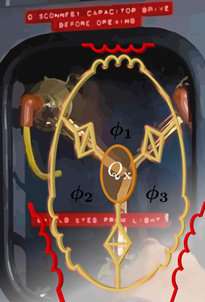 The operation of the microwave circulator resembles the flux capacitor from Back to the Future. Credit: FLEET

In the nearer term, the research could find application in the development of better electronics for mobile phone and wifi antennas and improving radar.
The paper, “A passive on-chip, superconducting circulator using a ring of tunnel junctions,” was published in Physical Review Letters on 23 May 2018.
The two participating ARC Centres of Excellence form part of Australia’s significant strength in quantum research.
The ARC Centre of Excellence for Engineered Quantum Systems (EQUS) researchers are building quantum machines that harness the full spectrum of quantum physics.
The ARC Centre of Excellence in Future Low-Energy Electronics Technologies (FLEET) is developing a new generation of ultra low-energy electronics to address the increasing challenge of energy use in computation.