OUT OF MIND » THE INSANITY OF REALITY » GOVERNMENTS & THE NEW WORLD ORDER » Jailed Journalist Tommy Robinson Exposed? Not So Fast 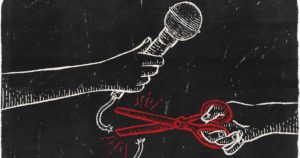 Trust me—before you believe the streams of information about how Tommy Robinson is a paid Rothschild shill (like this), you will want to watch the following video. Some will believe the propaganda and hit pieces. After seeing and hearing a lot about Tommy Robinson in the past week, I know what I believe.
The video below is an excellent production from Rebel Media and reveals so many things we wouldn’t have known otherwise. I learned a lot and am very glad I watched.
It just so happens that this very same scenario played out at least twice before when Tommy Robinson wasn’t there. The MSM was, and other citizen journalists, as well as the police and concerned citizens and there was a “scene” each time—BUT no one was arrested.
There WAS a disturbance at the court before under the same circumstances—same trial—but it wasn’t over Tommy Robinson or what he was doing. Check it out.
Others there were yelling “pedo” and “scumbag” at the defendants as they entered the court. The accused had repeatedly raped girls as young as 11 years old. Over and over. The gangs target white British girls and Sikh girls, but not Muslim girls.
We have already had confirmation that Tommy learned from his past experiences and was careful of his wording, etc. so as not to give any reason to find fault with his actions. He was reading the names of some Muslim men who the BBC had already named as alleged culprits and stated it as such.
These other citizen journalists and mainstream journalists were not as careful as Tommy Robinson as you will see in the clips but the police had no problem with what they were saying or doing.
You can bet this circus will go on for awhile. As always, there will be very compelling “evidence” put forth to vilify Robinson so it may be difficult to sort it out.
Fortunately, enough people felt compelled to come to his aid rather than turn their backs on him. You will come to your own conclusions about this man who got in trouble multiple times for his journalistic pursuits, because he felt he was exposing the truth the state media would not. We don’t all have to agree with his beliefs or actions but we need to ensure he is treated fairly or any one of us could be next.
This kind of character assassination is typical when the cabal is backed into a corner and has no options left and they are truly desperate now. In the past they have destroyed doctors, politicians, journalists, scientists—anyone who is a threat.
It appears they had Rolling Stone journalist Michael Hastings killed when he was onto a big story they didn’t want to get out, and we’re up to at least 89 holistic doctors now who died under suspicious circumstances. Look what they did to Julian Assange. Edward Snowden. They will say and do whatever is necessary to keep the truth from being exposed. It’s their MO.
They also strive to make examples of a few select people, which may be what the Snowden and Assange asylum was about. They also made an example of the CEO of the telecommunications company Quest (now Century Link) when he refused to hand over his company’s private client data to the feds. I recall hearing about his refusal, but just learned he was jailed for five years. I’ve wondered why Steve Jobs of Apple suddenly got a super-aggressive form of cancer, too. Did he refuse to put back doors in his software?
Creating division and in-fighting is also part of the NWO agenda. Unfortunately for them, we’re now paying attention and can usually see it for what it is. I’d love to set this story aside because I believe I see it for what it is, but I can’t, because it’s important to me to share the truth and to enable people to see and hear evidence for themselves so they can decide what’s true.
The controllers are masters of deception. They’ve deceived gullible Humans for thousands of years to the point that everything we know is a lie.
The dark also want Humans fighting other Humans, whether over religion, politics, sex, war, or anything at all. They knew exactly what bringing millions of people of a different culture would do to Western society. It was all part of the plan. Now everyone can play the “race card” to cause a ruckus.
They would like us to ignore the horror stories from Sweden and Germany of the escalating gang rapes and sexual assaults since the Muslim immigrants flooded those countries. Many people are very upset that the governments are paying for immigrants to live in nicer homes than many of the original residents and providing health care and living allowances. These acts were all organized decades ago by the globalist El-ites. They’re sticking to their plan and the unwary are being manipulated.
Please also remember that this war is not strictly the New World Order against Humanity; it is multiple factions—up to five—fighting amongst themselves as well. It makes a difference, and it’s complicated. This is all part of the battle for planet Earth.  ~ BP

OUT OF MIND » THE INSANITY OF REALITY » GOVERNMENTS & THE NEW WORLD ORDER » Jailed Journalist Tommy Robinson Exposed? Not So Fast