BEST FORMATIONS : MULTIPLE VIDEOS : LOCATIONS : CALIFORNIA, DENVER, LAS VEGAS VIDEO 1 : UNEDITED WITNESS STATEMENT : Crazy looking little green ufos gathering in sequence to take over the world must watch... they're Landing right here in front of me I think I've been abducted ORIGINAL VIDEO OWNER : Jess Berube Published on Jul 9, 2018 ORIGINAL VIDEO URL : https://youtu.be/t0OdrYsvJ8c VIDEO 2 : STATEMENT (edited) ; We watched the fireworks from the rooftop lounge at the Hyatt. My POS was parked at 14th and Glenarm, here - tps://goo.gl/maps/ZnBeQjEt3sp I noticed the phenomena back in the direction of the Hyatt. One of these objects moved back over its own path and I began to get tried my best to film it on my old galaxy s6 active, I was fairly successful… Having watched the video a couple times I’m fairly disappointed in myself; yes, you get the bulk of it but I let you down in that you missed out on even more. I panned away at a crucial time when they were doing something in unison. The comparison with the plane simply wasn’t worth it. I should have kept the camera on the action. I apologize, and for the swearing too because I do more than my fair share of that. Ha ha. I immediately thought, maybe they’re flares being dropped… But those were no flares nor airplanes. Besides; the army drops drop flares down near Fort Carson (I’m from Colorado Springs) commonly and they have never, EVER looked like that since we got there in 89’. And what’s the point of a flair that’s swirling around in the sky? One useless light source imo. NOTE EDITING offensive language removed , shortened ORIGINAL VIDEO OWNER ; Joe Kerry Published on Jul 5, 2018 ORIGINAL VIDEO URL : https://youtu.be/V28TWdrmexM VIDEO 3 : STATMENT ; the video is by Brian Billy ureno Fourth of July night La Puente California I also have real footage of a missile or a UFO because missiles don't turn and I have UFOs over the Sun ORIGINAL VIDEO OWNER : BRIAN BILLY URENO Published on Jul 5, 2018 ORIGINAL VIDEO URL : https://youtu.be/bAn7RKyjDHs VIDEO 4 : ORIGINAL VIDEO TITLE : Ufo, July 4 2018 Las Vegas ,NV UNEDITED WITNESS STATEMENT : Saw series of red orbs( no it’s not a plane I know what aircraft look like I work in aviation) they started to appear one at time and was total of 5 in a formation and then they sat there for little bit and slowly started to disappear, this was filmed July 4 2018 N Las Vegas and I’m facing north which is the location of the UFO’s and we all know what is located north of Las Vegas ...... ORIGINAL VIDEO OWNER ; B Wood Published on Jul 9, 2018 ORIGINAL VIDEO URL ; https://youtu.be/iA6frx-_6iA * THANKS FOR WATCHING * * PLEASE LEAVE YOUR THOUGHTS BELOW *


An enormous flash has been seen in the Rio Grande do Norte sky intrigued residents of several cities on Saturday night, July 7, 2018 around 10:35 pm. 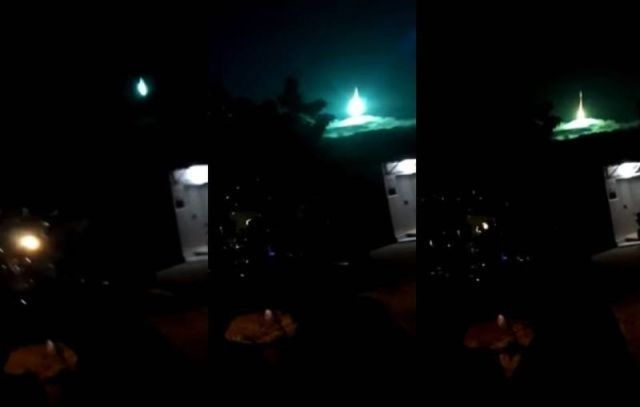 Residents of the cities of Mossoró, Areia Branca, Assú, Baraúna, Severiano Melo and even in Ceará cities like Icapui said they had witnessed the flash.

The first information is that a ball of fire suddenly appeared upon which it changed direction before falling towards the ocean, eventually hitting the ocean.

"I saw it clearly here on the beach of São Cristóvão and it lit up all the sea. It seemed to me an explosion of something in space," reported witness Daniel Fortunato.

At first glance it looks like a meteorite but since meteorites are not changing direction the question arises what it could have been that exploded over the ocean.

This unexplained event comes shortly after a mysterious object splashed into the ocean off shore Washington.