(INTELLIHUB) — It appears that the Clintons may have fallen on hard times or at least it appears that way after the not so dynamic duo was spotted flying on a Delta Airlines jet out of Regan National Airport (DCA) on Sunday which has got some people on the interwebs speculating that the family’s finances may have been frozen.
Former disgraced President Bill Clinton was captured on video shaking hands and taking a selfie with a kid at Gate 20 while Hillary stood in the background wearing designer sunglasses and a hideous navy blue muumuu. 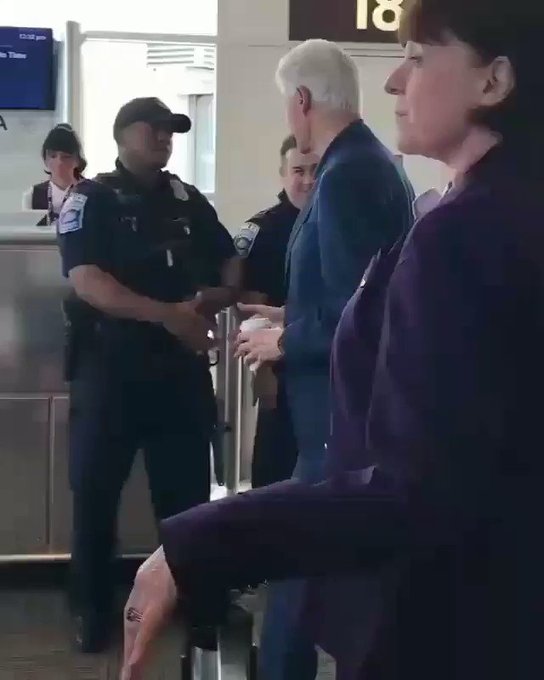 
Look who it is! The #Clintons are flying Delta from DCA. Soon these people won't be able to walk down the street! #Qanon #WWG1WGA #NowComesThePAIN #LockThemUp #HillaryClinton #BillClinton #FollowTheWhiteRabbit
2:12 PM - Jul 8, 2018

The once powerful politicians were later filmed aboard their Delta Airlines flight where an unamused Hillary took the window seat.
We the People Report tweeted: “Who do we have here? Sure doesn’t look like a private jet to me. Wonder why they’re flying Delta and not on a private jet? Assets frozen? Hiding in plain sight? Justice is coming!” 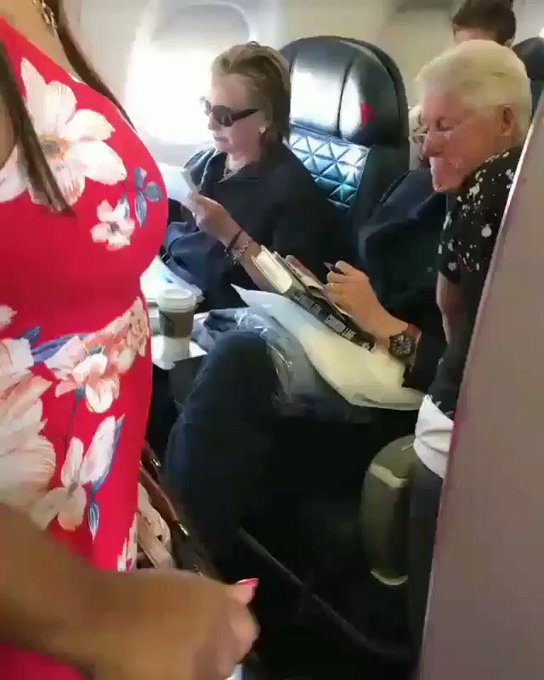 
Who do we have here? Sure doesn't look like a private jet to me. Wonder why they're flying Delta and not on a private jet? Assets frozen? Hiding in plain sight? Justice is coming!#QAnon #WWG1WGA #LockThemUp #HillaryClinton #BillClinton #TickTock #ClintonFoundation
2:07 PM - Jul 8, 2018

If you’ll notice, Bill Clinton is reading the novel Crimson Lake which is about a 13-year-old girl who was raped and almost murdered.

Sydney homicide detective Ted Conkaffey, the pariah narrator of this engrossing suspense novel from Ned Kelly Award–winner Fox (Hades), is halfway through his trial for the rape and attempted murder of a 13-year-old girl when the NSW director of public prosecutions withdraws the charges, since the evidence isn’t strong enough to satisfy a jury beyond a reasonable doubt. Per Australian law, Ted could be prosecuted later if more evidence emerges. After his wife asks him for a divorce, Ted moves north to Crimson Lake, Queensland, where he hopes to remain incognito. Ted’s lawyer puts him in touch with Amanda Pharrell, a convicted killer who has become a PI after serving eight years in prison. Ted and Amanda decide to partner on an investigation to find a missing bestselling author. Meanwhile, Ted wrestles with harassment from local cops, a reporter on his tail, and vigilante attacks against him. The surprising conclusion will leave the reader looking forward to Ted and Amanda’s further adventures.

Fox News Reports: An elderly couple died Saturday morning after an explosion completely reduced their two-story home to piles of rubble. The couple, identified as John Paladino, 73, and Carole Paladino, 72, were the only people inside the home in Newfield, New Jersey, when the blast occurred shortly after 6 a.m. Investigators have not revealed what caused the blast but have said they do not suspect any foul play. Neighbors said the couple had lived in their home for decades, and it was where they raised their children. An appliance had been delivered on Friday, neighbors said, speculating the blast could be a gas explosion.


Thanks to 4-truth for the forward

Admin
Posts : 107460
Join date : 2012-01-04
Location : Woodstock Nation
Well that answers the question why the Clinton's were flying commercial. LOL
Very observant of you 4-truth. Thanks :)