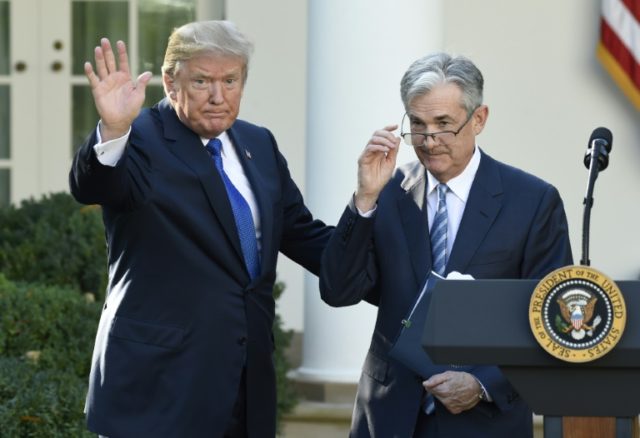 Now it is a currency war.

Wall Street has fretted over the risks of a trade war for months even while economic data continued to pour in showing the U.S. economy is accelerating while the rest of the world slows down. Despite a lot of furrowed brows and fleece-vested flagellation about tariffs, however, the markets for stocks, bonds, and just about everything that can be priced show no signs of stress.
President Donald Trump changed the conversation on Friday from trade war to currency war when he tweeted that China and the European Union are “manipulating their currencies and interest rates lower.”
Wall Street’s top currency analyst, Jens Nordvig, told Bloomberg that “Trump’s rhetoric over the last 24 hours is certainly shifting this from a trade war to a currency war.”
He told CNBC: “We’ve had a trade war that’s been going on for awhile, and now we’re starting to hear talk about ‘you shouldn’t be doing that with your currency.”
“It has now been virtually defined as a currency war by the U.S. president, given that he explicitly suggested foreign countries are manipulating exchange rates for competitive purposes,” Shahab Jalinoos, Credit Suisse Group top currency strategist told Bloomberg.
Trump’s comments came after the yuan fell to its lowest level against the dollar in 2 years and its central bank appeared to be uninterested in supporting it.
Trump said in an interview with CNBC that aired on Friday that he was prepared to impose tariffs on $500 billion of Chinese goods.
Despite the chatter about trade war and currency war on Wall Street, the U.S. stock market was unshaken. Approaching the final hour of trading for the week, stock indexes were close to unchanged for the day and positive for the third consecutive week.
Trump probably would not mind the consequences of a currency war. Analysts think that the war would hurt emerging market stocks, particularly in Asia, as well as lead oil prices lower, something Trump has been advocating for months.
The dollar declined against foreign currencies after Trump’s tweet. A weaker dollar makes U.S. exports more attractive around the world, potentially reducing the U.S. trade deficit. The U.S. dollar has been strengthening against most foreign currencies for several months, with Wall Street betting that it will appreciate even more. It’s likely that the Fed’s interest rate hikes have contributed to the dollar’s rise, as interest rates remain stuck at very low levels elsewhere around the globe.
Trump’s comments are likely going to be a big topic of discussion in Buenos Aires, Argentina this weekend where the  Group of 20 summit of finance ministers is set to convene.

Re: Currency War Breaks Out After Trump Accuses China and Europe of Manipulation Sat Jul 21, 2018 4:20 pm

Re: Currency War Breaks Out After Trump Accuses China and Europe of Manipulation Sun Jul 22, 2018 3:36 pm

Posts : 2620
Join date : 2012-01-17
Age : 74
Location : NH
Like most things going on now days, it has to be labeled. So logically if you don't put a label on it to fit the desired narrative or intentionally miss direct from reality, some one else may actually come out and call it what it really is. And we cant have that now, can we?

» China Accuses the CIA of Destroying Asian Masculinity
» Europe’s lockdown fury: Violence breaks out in Vienna as 10,000 protesters take to streets and 1000s more march in Amsterdam after 2 shot in Rotterdam
» All Hell Breaks Out At Apple China Factory As Workers Clash With Guards Over Lockdowns
» Trump Breaks Records for Unprecedented Crowd Size at Iowa Rally
» David Icke on Trump, Antifa & Perception Manipulation