The Quartz Crystal – From A Shamanic Point of View 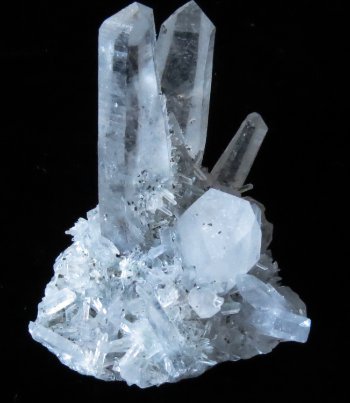 The Quartz Crystal – From A Shamanic Point of View

Crystals have been used by several ancient cultures from around the world for a very long time. You can find literature on them in the Vedas, Buddhist traditions, ancient Egypt, and ancient Greek lore. They are also described in the Shamanistic practices of several indigenous cultures as well as within ancient lost civilizations like Atlantis. Even Nikola Tesla was fascinated by Crystals, saying that “in a crystal, we have clear evidence of the existence of a formative life principle, and though we cannot understand the life of a crystal, it is nonetheless a living being.”
advertisement - learn more

These gemstones have been central to various cultures throughout human history. So why does mainstream anthropological literature seem to ignore crystals? Today, the meaning and significance of crystals are virtually unknown, which is a shame. The significant power of crystals could be used to help planet Earth and improve the overall health of the entire population.

Today, crystals are placed within the “New Age” category, and because of that, they are given somewhat of a negative connotation. It’s not as if only modern groups all of a sudden started having an interest in crystals out of nothing; interest in crystals do indeed have an interesting and ancient origin.
This article is going to focus on the Shamanistic perspective of crystals, as outlined by Michael Harner, in his book The Way of The Shaman. Harner is the founder of the Foundation for Shamanic Studies. He actually pioneered the introduction of shamanism and the shamanic drum journey to contemporary life and is recognized as the world leader in this movement.
Harner received his anthropology Ph.D. in 1963 from the University of California, Berkeley, and has taught at a number of institutions, including Columbia and Yale University, He served as co-chair of the anthropology section of the New York Academy of Sciences, but left academia in 1987 in order to devote himself full time to shamanism. In 2003, he received an honorary doctorate in recognition of his achievements in shamanic studies.
As a website dedicated to his legacy points out,

Michael Harner is not just an anthropologist who has studied shamanism; he is an authentic white shaman, observes the distinguished transpersonal psychologist Stanislav Grof. Dr. Harner began learning about shamanism in 1956-57 while studying with the Shuar (Jívaro) tribe of the Ecuadorian Amazon, and started practicing shamanism during his 1960-61 stay with the Conibo people of the Peruvian Amazon. He subsequently returned to the Shuar for additional practical training in shamanism. He became recognized as a shaman by the indigenous shamans with whom he worked, including ones belonging to the following peoples: the Conibo and Shuar (formerly Jívaro) in South America; the Coast Salish, Pomo, and Northern Paiute in western North America; the Inland Inuit and the Sami (formerly Lapps) in the Arctic; and the Tuvans of central Asia. In Russia, assembled Siberian shamans of the Buriat people publicly declared Michael Harner a great shaman, upon witnessing his shamanic healings in 1998 (the word, shaman, comes from Siberia). They also said he proved that one could do both science and shamanism.

Clearly, if you’re looking for a source to dive deep into the realms of Shamanism, it’s hard to think of a source as solid as this which can provide reliable information.
The Quartz Crystal: According To The Way of The Shaman

While there is potentially an almost infinite variety of power objects, there is one kind in particular that is regularly found in the keeping of shamans. This is the quartz crystal. In North and South America, Australia, southeast Asia, and elsewhere, shamans ascribe a singular importance to these pointed, six-sided stones that are usually transparent to milky-white. Shamans use a wide variety of sizes, ranging from the length of a little-giner joint to rarer ones a foot or more in length…The quartz crystal is considered the strongest power object among such widely separate peoples as the Jivaro in South America and the tribes of Australia. People as distant from one another as the aborigines of easter Australia and the Yuman speakers of southern California and adjacent Baja California consider the quartz crystal “living,” or a “live rock.” The widespread employment of quartz crystals in shamanism spans thousands of years. In California, for example, quartz crystals have been found in archeological sites and prehistoric burials dating as far back as 8000 years.

In his book, Harner goes on to describe how throughout all these cultures, this crystal is viewed as a healing tool and a spirit helper. He goes on to say that “the western Yuman shamans enter into a special partnership with their quartz crystals and must “feed” them; this is reminiscent of Jivaro shamans feeding their spirit helpers with tobacco water in order to keep them.”
Harner explains how some shamans in training had a piece of quartz “sung” into their foreheads so that they would “be able to see right into things.” This concept is not much different from the concept of the “third eye.”

Seeing Into Other Worlds

Quartz crystals were used from everything to seeing into other worlds to assisting in the extraction from patients of harmful disease or “intrusions,” as Harner called them. He gives an example of the Warao shaman of South America, who believed that, at death, their soul would merge with the quartz crystal inside of his rattle and ascends to the sky in the form of light. The Australian Kabi shaman with “many crystals in his body” could journey down into the deepest waterholes, where the rainbow spirit lived, and receive more quartz crystals. Such a shaman would arise “full of life, and be a medicine-man of the highest degree.”
A lot of power is associated with the quartz crystal according to shamanism, and Harner points out:

“In modern physics, the quartz crystal is also involved in the manipulation of power. Its remarkable electronic properties early made it a basic component in radio transmitters and receivers. Thin wafers sliced from quartz crystals later became basic components for modern electronic hardware such as computers and timepieces. Western science has obviously advanced to the point that it recognized the quartz crystal as a power object, something that shamans have known for thousands of years.”

While this all may be coincidental, it is one of the many synchronicities that make the accumulated knowledge of shamanism exciting and even awesome.
Not only did shamans used their quartz crystals to heal, they used it to peer into the future, for seeing as well as divination. An interesting point in the book Harner brings up is the crystal ball, “with which people in our culture are familiar, at least by name, is simply a polished descendant of the old shamanic crystal.” He explains how some indigenous cultures used crystal gazing to see visions of the past, what’s happening in the present as well as to see in the future.
One thing I came across that really interested me, was distant healing. It’s something I’ve written about for years and something that’s been exemplified by countless peer-reviewed studies that have been published in multiple journals.  Distant healing is using one person’s intention and directing it towards another for the purposes of healing. If you want to learn more about that, you can check out the Institute of Noetic Sciences, or refer to this article that goes a little bit deeper into the mind-body connection and the power it has to heal.

“The shaman sent out the crystal at night to bring back the image of the sick person. When the image arrived, the shaman danced around the crystal, shaking his rattle, and then ordered the crystal, as his spirit helper, to extract a harmful power intrustion from the image. The distant person, whose image it was, was therby healed.”

Harner’s book goes into much greater detail regarding the uses of crystals in shamanism, among other places. The above is just a tidbit, nothing but a quick snapshot of what you can learn from reading his book.
How to Cleanse & Choose Your Crystal
You can simply visit a rock shop or a mineral store, and pick out one that you feel attracted to. As Harner explains,

Do not immediately put the crystal you choose into your bundle or with your other power objects. First you must cleanse it, since its history is unkown to you. Cleanse the cyrstal by washing it in the water of a natural spring or the ocean. Then keep it seperate from your medicine bundle until the arrival of a winter or summer solstice. Take it to an isolated high place, such as a mountain top. There split a tick at one end, push the unsplit end into the ground, and place the quartz crystal, point upward, in the cleft of the stick. Leave it there eight days in the sun to “re-charge” before putting it in the medicine bundle. Periodically between solstices, you should remove the cyrstal from the bundle and “wake up” its power. This is done by hitting its nonpointed end lightly on a rock protruding from a spring or an ocean.

Interesting, to say the least, isn’t it? These sacred and special objects should be treated with care, and our special connection to them, as well as well all of nature, is something that needs to return to our planet if we are to move forward into abundance and create a new human experience. “The Way of the Shaman” must return to planet Earth, in perhaps a more modern form. Who knows, perhaps this is something in our future as humanity is being called to walk a more spiritual path, one in which we truly realize how everything is interconnected, and how nature provides us with everything we need. Combine this wisdom with human ingenuity, and we have a future that most of us cannot even comprehend.
Source:
The Way of The Shaman, By Michael Harner
Thanks to: https://www.collective-evolution.com