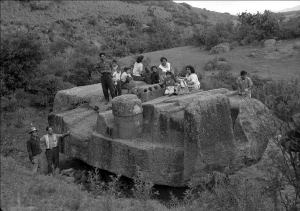 
Patreon: https://www.patreon.com/MysteryHistory Facebook: https://www.facebook.com/MysteryHisto... Twitter: https://twitter.com/Mysterytweetery Steemit: https://steemit.com/@mysteryhistory Narration By Don Moffit: www.DonMoffit.com One of the oldest, most widely recognised gods through ancient Mesoamerica, is a being known as Tlaloc. Worshipped as a giver of life and sustenance. He was also feared for his ability to send hail, thunder, and lightning, and for being the lord of the element water. Appearing in many forms throughout Aztec history, of usually water-dwelling creatures such as amphibians. Could his roots actually date back to the so called “great deluge,” which has been noted in so many ancient religions throughout the world? Although the name Tlaloc is specifically Aztec, worship of a storm god, far predates Teotihuacan, and is eerily similar to the Maya god Chaac. Undoubtedly the most impressive depiction of Tlaloc which can be found anywhere, is his megalithic statue, found in the small town of Coatlinchan.. Clearly once a pilgrimage site, whats impressive regarding the statue is its size, weighing in at an estimated 168 tons, largest existing monolith in the Americas. Made from Basalt, the workable stone for this monumental artwork, was at some point, transported to this spot in preparation for carving. The question is, how did our ancient ancestors move such enormous lumps of basalt, similar in size to those of the Moai statues, synonymous with Easter island. Why did this ancient people revere water gods so much? Were these gods inspired by traumatic memories and legends, left to them by their ancestors? Possibly a surviving fragment of the once flourishing civilisation, responsible for so many now unexplainable sites, all over the world? Intriguingly, according to Aztec belief, Tlaloc was a god primarily connected with meteorological phenomena, that were related to water. In 1963, the National Museum of Anthropology in Mexico City, decided that the monolith should be placed at the entrance of the museum. The people of Coatlinchan eventually agreed to this request, on the condition that a government road, a school, and a medical centre, be built in their city. On the 16th of April 1964, the monolith began its journey to Mexico City. The Monolith of Tlaloc was transported on the back of a giant, purpose-built trailer, over a distance of about 30 miles. When the monolith arrived in the capital, it was greeted by a crowd of 25,000 people, upon its arrival, the location mysteriously experienced an unusual storm... Clearly an incredible ancient artefact, which we find, highly compelling. https://www.ancient-origins.net/artif...