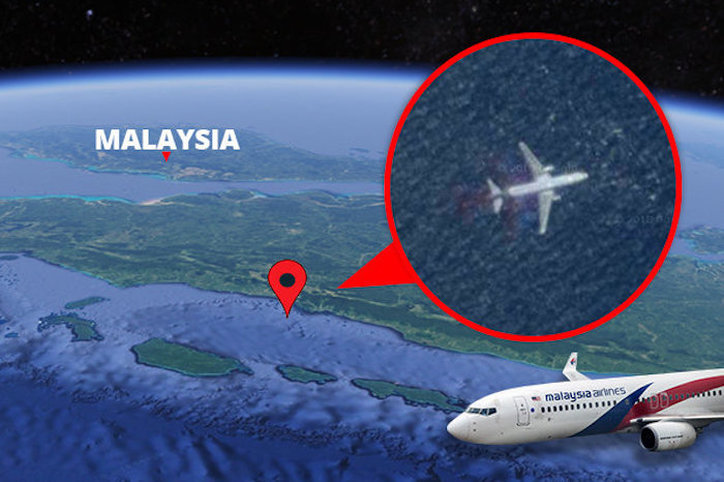 An online researcher claims to have discovered an aerial photograph of missing Malaysia flight MH370 on Google Maps.
Just one hour away from where the missing flight took off from Kuala Lumpur, in 2014, the photograph appears to depict a plane sitting in the sea just off the coast of Padang, Indonesia.

Dailystar.co.uk reports: The author of the post wrote: “Just putting this out there, what if this was the MH370 after all this time?
“Some will say it’s just an aircraft coming in for landing caught on satellite, some may say this is just a bogus post.
“But just imagine the aircraft came in for a slow soft water landing, in calm waters which is below the radar and they knew it was there for a rescue job.”
One wrote: “Yikes, it’s not a bogus post, I just checked and it was there.
“And it ain’t coming into land, if you look closely, it looks like it’s upside down?

“It’s so close to that island and the main coast, someone had to have survived?
“Unless it disorientated them being upside down? Nice catch.”

And another added: “From my point of view, if you compare it with the size a Boeing 777–200 has – it fits .
“Sure it’s not the same size and little smaller due to it being underwater (if it really is).
“Anyhow great find. If it is really underwater I wonder why nobody has yet marked it in Google Earth with details.”
However, another argued: “It’s right side up. If it were upside down, the engine mounts would be more visible. Also, this one is above the water, as you can clearly see it, vs if it was at the bottom in the water.”
And another said: “Ok, let’s say you are onto something.
“I have one very logical question, do you think they would leave it up on Google Earth for the world to see? Especially if there really was a conspiracy?
“Here’s something for you to check out, I honestly think its just a plane in flight.
“I don’t know what that is but the odds are high it is not MH370.
“Still worth looking at, have my doubts it is.”
Flight MH370’s disappearance is one of the biggest aviation mysteries in history.
It flew off the radar when flying from Kuala Lumpur to Beijing and hasn’t been found since, with the 239 people on board assumed dead.
Since then a numbers of theories have emerged, from fuel shortages to the claim the pilot committing suicide.