The so-called "Lagarde List" – the name given by the Greek press
to a list containing 1,991 names of wealthy,
Swiss-bank-account-possessing Greeks who are being investigated for
corruption and tax evasion – is causing a major stir in Greece right
now.

Since Friday, two men suspected to be on the list have turned up dead in apparent suicides.

Here is what has happened in the past few days.

Apparently, it had been "missing," according to a Financial Times article from a few days prior, and current finance minister Yannis Stournaras had vowed to track it down. 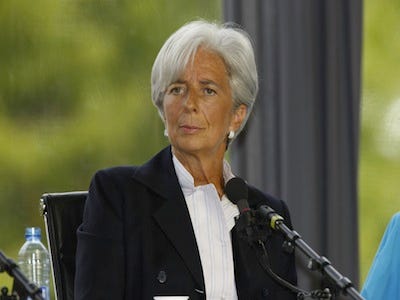 Yannis Stournaras, the finance minister,
told the FT on Sunday that he would pursue the issue of the missing CD
with Greek depositors names “as a priority”.

“I first learnt of its existence last
week from the newspapers . . . but if SDOE can’t track it down, then
we’ll ask our European partners for another copy,” Mr Stournaras said.

This provided the impetus for Venizelos to hand over the list to Greek prime minister Antonis Samaras last Tuesday, saying he had already made Greece's financial crimes unit, SDOE, aware of it, as reported by Kathimerini.


Venizelos was given the list by his predecessor, former finance minister Giorgos Papaconstantinou, who received it from Christine Lagarde in 2010, when she was serving as France's finance minister.


Immediately after Samaras received the list from Venizelos, Yiannis Sbokos, a former Greek minister involved in defense, was arrested by SDOE over financial corruption.


Leonidas Tzanis, a former Greek minister who had been under investigation, was found hanged in his home last Friday. The Press Association reports that "the official said Mr Tzanis's death is being treated as suicide but no suicide note has been found."


Now, today, Vlassis
Kambouroglou, a wealthy Greek businessman in the defense industry, has
been found dead in a hotel room in Jakarta, Indonesia.

The Greek Reporter has the details on Kambouroglou:

A Greek businessman who had been accused
of being part of the bribery and money laundering network involving
former Defense Minister Akis Tsochatzopoulos, who is in jail on charges
of stealing as much as $1.29 billion from defense contracts, has been
found dead in a hotel room in Jakarta, Indonesia.


Vlassis Kambouroglou was the
Managing Director of Drumilan International, which was involved in the
sale of a Russian-made TOR-M1 missile system to Greece.
Authorities in Indonesia did not say how he died. Kambouroglou was
called to testify before a Parliamentary inquiry into the arms deal in
2004 but denied that his company made any money from the deal. No
charges were brought against him.

Now, Stournaras, Papaconstantinou, Venizelos, and another are going to have to testify before the Greek parliament on the list, according to Kathimerini:

Parliament’s ethics and transparency
committee on Monday voted in favor of Finance Minister Yannis Stournaras
and three former ministers -- Evangelos Venizelos, who now leads
socialist PASOK, Filippos Sachinidis and Giorgos Papaconstantinou --
being called before the House to reveal what they know about the
so-called “Lagarde list” -- a list of some 2,000 Greeks with deposits in
Swiss banks who are being probed for tax evasion.

According to sources, Venizelos and
Papaconstantinou testified over the weekend before financial prosecutor
Grigoris Peponis in connection with the list, which Papaconstantinou
claims to have received from former French Finance Minister Christine
Lagarde, who is now head of the International Monetary Fund. No details
about the former ministers’ testimonies were released but they are
believed to have repeated the positions they have expressed publicly to
date on the matter.


Venizelos faces some serious questions, as members of
parliament want to know if he's been in possession of the list for a
long time. The concern is that he may have been shielding fellow PASOK
party members from being exposed.

Venizelos was also the most recent finance minister before the
current one and served as the deputy prime minister before that, so he
has been in a management position in a Greek government that has been
failing to meet troika sanctions for a while, now.


The "Lagarde List" has not been made public, so there is no way to
say for sure at present whether Tzanis, Sbokos, or Kambouroglou's names
actually appear on the list. However, the timeline of events is
striking, and all are tied to past deals between the defense industry
and the Greek government.


Meanwhile, the "Lagarde List" doesn't just contain names of Greek tax
evaders. It's a list of closer to 22,000 names of wealthy people from
various EU member states with Swiss bank accounts. The implication is
that wealthy elites from other countries could be revealed in a
corruption probe as well.

This is all starting to blow up during a crucial moment for Greece as
it tries to come to an agreement with the troika over additional
spending cuts and German chancellor Angela Merkel visits Samaras tomorrow in Athens.

True that!! If you do the crime prepare to do the time!! I'm glad some of the bad guys are getting caught!!

Yeah but it never seems to pan out that way does it, someone always gets away with something, its very annoying!!

Posts : 3470
Join date : 2012-02-10
Age : 66
Location : Florida
Somehow, Nanneerose, I don't see them getting away with anything for much longer- It's already in the works- Just keep a watchful eye out, and watch this all go down- You'll be very surprised at the end result- :D