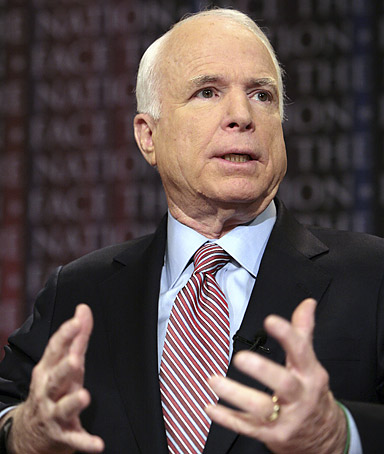 Arizona Sen. John McCain, a war hero who survived five years as a prisoner of war in Vietnam, served three decades in Congress and went on to become the Republican Party’s nominee for president in 2008, died Saturday. He was 81 years old.
In his last hours, McCain turned down further treatment, his family announced in a statement.
McCain was diagnosed with brain cancer in July 2017. Doctors discovered the tumor during a medical procedure to remove a blood clot from above his left eye. He remained upbeat after the diagnosis, flying back to Washington days after surgery with a large scar visible above his eye to partake in the Senate’s health care debate.
“I greatly appreciate the outpouring of support - unfortunately for my sparring partners in Congress, I'll be back soon, so stand-by!” McCain tweeted on July 20 after his diagnosis. 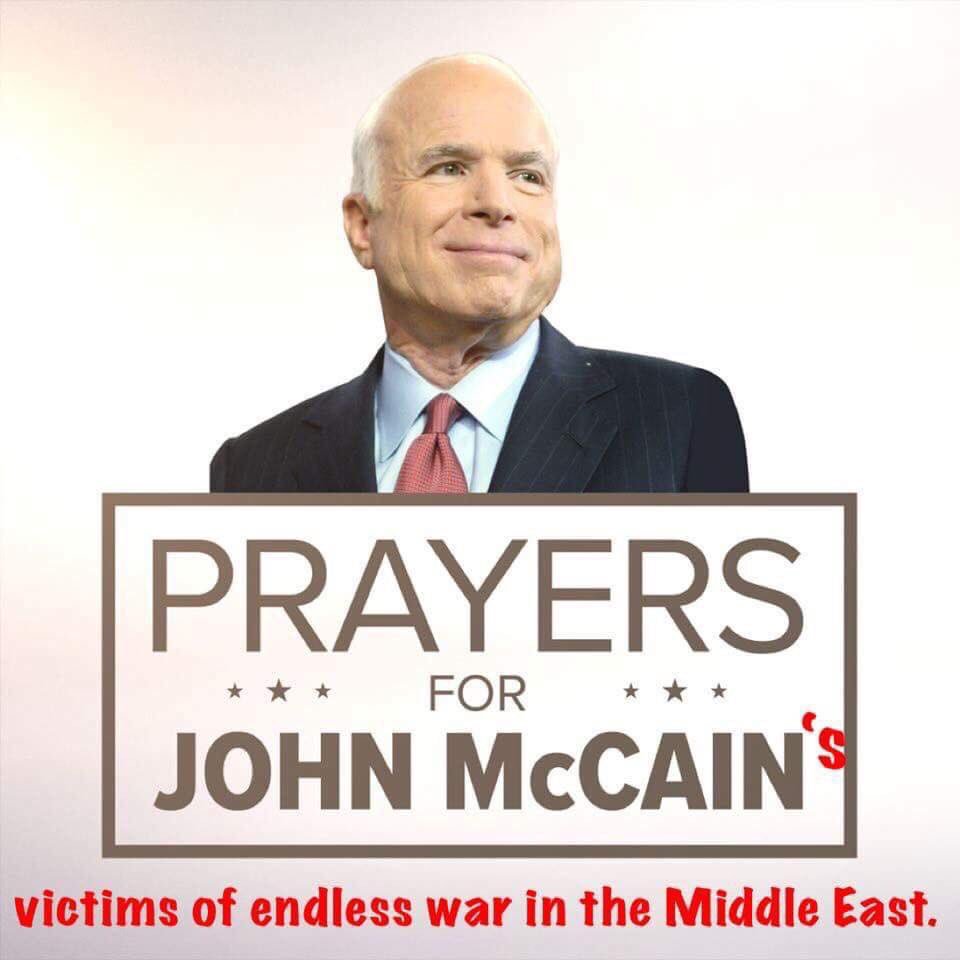 Thanks, David, for this compilation!

A real evil demon bastard! He is responsible for a lot of Vietnam POWs never returning! May he suffer a thousandfold through eternity as much as he caused! Good riddance if, in fact, he is really dead!

> When McCain finally stumbles into hell, the traitorous media will be singing his praises, calling him a patriot, a hero.
> Look a little closer. He was the opposite of a hero; a traitor and like his father before him, a servant of Israel.
> John McCain Praises Father’s Whitewashing of Israel’s Attack on the USS LIBERTY!

> http://america-hijacked.com/2011/09/02/john-mccain-praises-fathers-whitewashing-of-israels-attack-on-the-uss-liberty/
>
> ~~~
> The videos/accounts telling the truth of John McCain’s treachery are quietly being terminated. If missing, search by title.

> The REAL John McCain - Bully, Traitor, Liar, Adulterer and Warmongering Criminal
> http://www.fourwinds10.com/siterun_data/government/fraud/elections_campaigning/news.php?q=1217103060
>
> "McCain’s most horrendous loss occurred in 1967 on the USS Forrestal. Well, not horrendous for him. The starter motor switch on the A4E Skyhawk allowed fuel to pool in the engine. When the aircraft was “wet-started,” an impressive flame would shoot from the tail. It was one of the ways young hot-shots got their jollies. Investigators and survivors took the position that McCain deliberately wet-started to harass the F4 pilot directly behind him. The cook off launched an M34 Zuni rocket that tore through the Skyhawk’s fuel tank, released a thousand pound bomb, and ignited a fire that killed the pilot plus 167 men. Before the tally of dead and dying was complete, the son and grandson of admirals had been transferred to the USS Oriskany. As a rising naval officer, McCain was surrounded by rumors of numerous adulterous affairs, such as used to be called “conduct unbecoming an officer.” Author and biographer Robert Timberg has detailed several of McCain’s sexual relationships with subordinates when serving as a Squadron Leader and an Executive Officer. I think we all know such behavior is a clear violation of the Uniform Code of Military Justice, in other words, a crime.”
>

> The real John McCain. “33 POWs faced execution for treason after Vietnam until Nixon pardoned all POWs.” McCain was #1 on the list
> https://powderedwigsociety.com/the-real-john-mccain-20012/
>

> The real John McCain. A foul mouthed traitor and disgrace of a senator.
> http://12160.info/page/the-real-john-mccain-a-foul-mouthed-traitor-and-disgrace-of-a-sen
>
> ~~~
>
> Watch the actions of Senators John McCain and Lindsey Graham, both Israeli sycophants. Look at their perpetual legislative actions for Israel, while constantly belching more war;
> often to the detriment of the American people and the entire world. Who is paying them?
>

> “I may have the first all-Jewish cabinet in America because of the pro-Israel funding. [Chuckles.] Bottom line is, I’ve got a lot of support from the pro-Israel funding.”
> -- Republican Senator Lindsey Graham, S.C., http://davidduke.com/jewish-money-flooding-presidential-campaign-lindsey-graham-jokes-he-will-have-all-jewish-cabinet/
>
> Friends of Israel
> http://www.newyorker.com/magazine/2014/09/01/friends-israel
> "In a press conference, Graham, who has been a major recipient of campaign contributions connected to AIPAC, pointed out that the funding for Iron Dome was intended as a gesture of solidarity with Israel. “Not only are we going to give you more missiles—we’re going to be a better friend,” Graham said. “We’re going to fight for you in the international court of public opinion. We’re going to fight for you in the United Nations.”
>

> Bought and Sold? John McCain’s Foundation Took $1 Million from Saudi Arabia
> http://rinf.com/alt-news/latest-news/bought-and-sold-john-mccains-foundation-took-1-million-from-saudi-arabia/
> "A new scandal has erupted involving US Senator John McCain of Arizona — his nonprofit organization, the McCain Institute for International Leadership, received a $1 million donation from the repressive government of Saudi Arabia in 2014."
>

> John McCain — The Insane Traitor Who Masquerades as an American Hero
> http://freedomoutpost.com/john-mccain-the-insane-traitor-who-masquerades-as-an-american-hero/
>

> McCain to US administration: Israel needs you
> http://www.jpost.com/Diplomacy-and-Politics/WATCH-LIVE-McCain-addressing-AIPAC-conference-in-Washington-344117
>

Republican Senator and former presidential hopeful John McCain said on Tuesday that he was "overjoyed" that Israel possesses nuclear weapons to guard against regional threats.”
>
"Israel has never publically acknowledged its nuclear weapons programme, although it is widely believed that has had one since the 1960s when it penned a secret deal with the US."
>
>
John McCain: Out of Touch, Out to Lunch and No Longer Fit for Public Office
> http://21stcenturywire.com/2013/09/09/john-mccain-out-of-touch-out-to-lunch-and-no-longer-fit-for-public-office/
>
"As train wreck politicians go, it would be difficult to top the case study of Republican US Senator John McCain from Arizona."
>
> Throw the Bums Out
> http://www.veteransnewsnow.com/2013/08/11/225999-throw-the-bums-out/
>
"If you wonder why Washington persists in engaging in self-destructive behavior, just go ask Senators John McCain and Lindsey Graham.
>
They will wave a paper in your face and on it will be the latest directives from AIPAC."
>
> McCain and Graham flipflop on aid to Egypt – after AIPAC speaks up
> http://www.veteransnewsnow.com/2013/08/17/226178-mccain-and-graham-flipflop-on-aid-to-egypt-after-aipac-speaks-up/
>
"It certainly appears that the two men abandoned a position of principle because AIPAC told them to. You’d think they would be buffoons. But they’re not. They haven’t lost any political capital for this abdication of principle. No, they’ve gained political capital. The Times said the senators went to Egypt this week “at the request of President Obama.” And as Jeff Klein, who pointed me to this story, says, No one in the press is calling them out for flipflopping. It’s just not a story when powerful senators dance to AIPAC’s tune."
>

> "Sen. Ted Cruz (R-Tex.) last week promoted Lieberman as “one strong option” to replace outgoing Defense Secretary Chuck Hagel. “I urge the President to give him full and fair consideration for this critical position,” Cruz said in a press release."
>
> "Too many in America who have no accurate information about McCain’s background, they are unaware that he is only out of prison because President Nixon issued him a pardon for crimes he committed during his time as a prisoner in North Vietnam. Two high ranking officers, Colonel Earl Hopper and Colonel Ted Guy, both of unimpeachable reputation, accused McCain of dozens of counts of treason." http://www.presstv.ir/detail/2012/09/10/260754/a-world-infected-with-usisrael-psyops/
>

> "Senator McCain, son of Admiral Sidney McCain, famous for orchestrating the cover-up of the USS Liberty incident in 1967, is himself more than slightly notorious in military circles. On July 29, 1967, only weeks after the attempted sinking of the USS Liberty, then Lt. John McCain nearly became the first American pilot to sink an American aircraft carrier. While on the USS Forrestal, McCain fired the afterburners of his jet fighter as a prank to “singe” the pilot waiting behind him for takeoff. The flames from McCain’s aircraft set off the missiles on the plane behind him killing 134 sailors and maiming 169. A few months later, McCain was shot down over North Vietnam. While a prisoner there, he aided North Vietnamese gunners by training them in tactics and predicting American bombing routes. (Source: Colonel Earl Hopper USA SF, Sgt Major John Holland, USMC). McCain made thirty-two propaganda broadcasts (all classified) for the North Vietnamese while a prisoner. When he returned home, he was called “the Manchurian Candidate” after a film character who was programmed to spy for the communists while held prisoner." http://www.veteranstoday.com/2013/07/26/israeli-hoax-on-gen-dempsey-unmasked

> DONALD TRUMP IS RIGHT ABOUT JOHN McCAIN
> http://www.newswithviews.com/baldwin/baldwin866.htm
>
> John McCain is Not a Hero! ‘Manchurian Candidate’ His POW Commanding Officer Submitted a Charge of Treason to Military Prosecutors!

> http://www.liveleak.com/view?i=30f_1437980849
> "The McCain story is a curious one. Records of McCain’s period as a POW were classified upon his return from North Vietnam. His commanding officer, while a POW, was Colonel Ted Guy who submitted a series of charges to military prosecutors citing McCain for, among other things, treason."
>

> John McCain ‘Sang Like a Canary’ to the North Vietnamese

> "Within the first four days of his capture, while in his initial interrogation (26-30 October 1967) at the Hoa Lo prison in Hanoi, and while recovering from his shootdown wounds in the North Vietnamese military hospital (31 October 1967 through mid-December 1967), John McCain provided military information far beyond that which the Code of Conduct – and that which other POWs, while undergoing extreme torture – refused to divulge to the enemy."
>

> "Shocking claims were made that McCain may never have been tortured and that he instead spent his wartime captivity collaborating with his captors and broadcasting Communist propaganda, a possibility that seemed almost incomprehensible to me given all the thousands of contrary articles that I had absorbed over the decades from the mainstream media."
>