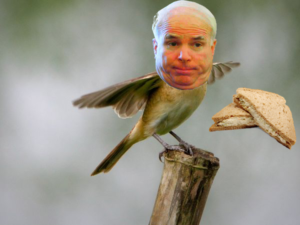 Whether he’s actually dead or not—there is a gross misunderstanding of who John McCain Jr. is/was and we need to set the record straight—so he can rest in peace.
With respect to the news that John McCain died at 4:28 pm on August 25, 2018… Far too many coincidences for me. I suspect they chose August 25th specifically, since they made a point of announcing this week they were suspending further treatment of his “brain cancer” and he was expected to die within 12 days. They set the stage and then the “Songbird” ever so conveniently sang his swan song.
The cabal no doubt believe the “Songbird’s” passing on this date will somehow lend a sense of honour to his death—and many believe he would likely fake his death. Some say McCain doesn’t have brain cancer at all.
He hasn’t been seen in public for some time, and he will be wanting to escape certain extreme penalties the People would levy based on his war criminal activities, not to mention the million dollar Saudi donation to a fund he claims to have no ties to—and the arrests of deep state operatives and traitors like McCain won’t be long in coming now. It seems he’s not only a traitor, but a coward as well and can’t bear to be around to face the music designed for a songbird of this calibre.
We have also heard that deep state cabal members were encouraged to commit suicide to spare the public the angst of having to put criminals/traitors to death.
Just as the New World Order present awards like the Nobel Peace Prize to their minions like Obama—the most warring President in recent history—they would honour their own by tagging on to the glory belonging to someone else—because McCain bears none of his own.
Read more here…
or read the Rolling Stone version… he’s legendary all right. These pieces are outright nauseating.

McCain the Hero? Not so fast.

There are conflicting reports of McCain’s historical contributions to Humanity and his country, and even the military call him out as the Hanoi Hilton Songbird—and a traitor. It sounds like the Senator was born with a silver spoon in his mouth and has soared through life resting comfortably on the laurels of his military forbears.

Here’s an interesting headline from a website that wanted to acquaint people with John McCain when he ran for President. They mention “Bronfman”—as in the “NXIVM” Bronfmans?  There’s some interesting stuff at this website. 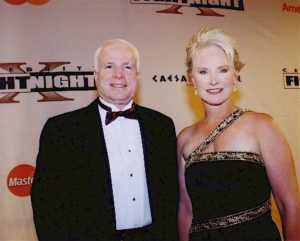 I take it this is the Cindy McCain the media told us was going to take over her husband’s seat for the remainder of his term if he expired prior? Like he can bequeath his Senatorial status in a will. That’s what elections are for. The People get to choose.

“graduated fifth from the bottom of his class” of almost 900 graduates
“Things are taking place in a favorable opinion. The United States at present seems to be standing alone.  So much is its isolation”
How did a PRISONER OF WAR know this?  Did they have a pool, a jacuzzi, and a tv for him?
Why the jewish mafia wants McCain
TRY, don’t ELECT, this Manchurian Candidate whose support comes from the CRIMINAL jew mafia
NOT a natural born citizen
RIGHTEOUSLY labled a TRAITOR!!
Son of the admiral who dishonored the USS Liberty!!
Almost sank the USS Forrestal
McCain crashed 5 jets, plus was responsible for the Forrestal fire. Surviving crewmen and those who investigated the Forrestal fire case reported that McCain deliberately ‘wet-started’ his A-4E Skyhawk to shake up the guy in the F-4 Phantom behind his A-4. ‘Wet-starts’, done either deliberately (the starter motor switch allowed kerosene to pool in the engine and give a wet start) or accidentally, shoot a large flame from the tail of the aircraft. In McCain’s case, the ‘wet-start’ ‘cooked off’ and launched the M34 Zuni rocket from the rear F-4 that punctured the Skyhawk’s fueltank, knocked the M-65 1000 lb bomb off it’s 500 lb rated mount, and touched off the explosions and massive fire. The F-4 pilot was reportedly killed in the conflagration, along with 167 of his fellow Forrestal shipmates (including those who died later from wounds suffered). ‘Wet starting’ was a common practice among young ‘hot-dog’ pilots. McCain was quickly (they were still counting the Forrestal dead) transferred to the USS Oriskany (the only Forrestal crewman to be immediately transferred).
Description: XA4D-1 Skyhawk BuNo 137812 experiencing a wet start (note the pool of JP on the ground and the tongue of flame from the tailpipe).
“A fire aboard Enterprise on 14 January 1969, resulting from detonation of a MK-32 Zuni rocket warhead overheated by exhaust from an aircraft starting unit, took 27 lives, injured 314 and destroyed 15 aircraft. Repairs to the ship were completed at Pearl Harbor, Hawaii, in early March.”

Daniel Nasaw in Washington guardian.co.uk
Tuesday April 29 2008
This article was first published on guardian.co.uk on Tuesday April 29 2008. It was last updated at 04:03 on April 29 2008.
Republican presidential candidate John McCain speaks in Cincinnati, Ohio. Photograph: Joshua Lott/Getty
A US campaign watchdog has accused presumptive Republican president nominee John McCain of violating election laws by accepting campaign contributions from two prominent Londoners.
At issue is a fundraising luncheon held in March at London’s Spencer House, during McCain’s swing through the United Kingdom. An invitation to the event lists Lord Rothschild and Nathaniel Rothschild as hosts, and indicates the event was made possible with their “kind permission”.
Judicial Watch, a Washington organisation instrumental in the March release of Hillary Clinton’s White House schedules, has asked US election monitors to investigate whether the Rothschilds improperly sponsored the fundraiser. US political campaigns are forbidden from accepting contributions from foreign nationals.
“The question is whether or not the Rothschilds paid for the event, the venue, the catering, or any other related costs,” said Judicial Watch president Tom Fitton.
Tickets to the event cost $1,000 to $2,300, and the luncheon dress code was “lounge suits,” the Washington Post reported in March.
The McCain campaign did not immediately return a call seeking comment.
Judicial Watch also complained to the US election authority, the federal election commission, about Elton John’s involvement in Clinton’s campaign. The group alleged the British rocker broke US campaign laws by performing at a fundraiser for the New York senator. The Clinton campaign argued US law allowed the British musician to volunteer his time and solicit Americans for contributions.
The federal election commission is unlikely to act soon on the group’s McCain complaint. It is currently short-handed, a result of a political squabble between the Democratic-led senate and the Bush administration, and lacks a quorum to take action.
____________
This is the sorry SOB who wants to be President and Commander in Chief yet violated his military Code of Conduct and probably caused the lives of his fellow service members and POWs.  This is the same sorry SOB who berated the families of those service members missing in action and refuse to allow further searches for them and in addition refused to allow his POW records to be released.  That say a lot about this wannabe hero and what kind of President he would be, especially since his former captors could blackmail him because they know what he did.  No this person must not be President and he certainly is no hero, the heroes are the men who died living up to the Code of Conduct which McCain violated.

PRISONER OR HONORED GUEST?
McCain’s 5½-year stay at the Hanoi Hilton (officially Hoa Loa Prison) has ever since been the subject of great controversy. He maintains that he was tortured and otherwise badly mistreated. One of many who disagree is Dennis Johnson, imprisoned at Hanoi and never given treatment for his broken leg. He reports that every time he saw McCain, who was generally kept segregated, the man was clean-shaven, dressed in fresh clothes, and appeared comfortable among North Vietnamese Army officers. He adds that he frequently heard McCain’s collaborative statements broadcast over the prison’s loud speakers.
On October 26, 1967, McCain’s A-4 Skyhawk was shot down over Hanoi. The fractures of 1 leg and both arms were reportedly due to his failure to tuck them in during ejection. According to U.S. News & World Report (May 14, 1973), McCain didn’t wait long before offering military information in return for medical care. While an extraordinary patient at Gi Lam Hospital, he was visited by a number of dignitaries, including, to quote McCain himself, General Vo Nguyen Giap, the national hero of Dienbienphu.
Jack McLamb is a highly respected name in law enforcement circles. After 9 years of clandestine operations in Cambodia and unmentionable areas, he returned home to Phoenix where he became one of the most decorated police officers on record. Twice McLamb was named Officer of the Year. He went on to become an FBI hostage negotiator. This man has stated that every one of the many former POWs he has talked with consider McCain a traitor. States McLamb, “He was never tortured…The Vietnamese Communists called him the Songbird, that’s his code name, Songbird McCain, because he just came into the camp singing and telling them everything they wanted to know.” McLamb further quotes former POWs as saying McCain starred in 32 propaganda videos in which he denounced his country and comrades.
Source


All of the following information was given to us by our insiders who have specific first-hand knowledge of the Hillary Email scandal.  It seems that things are about to heat up.  We are told that of the 662,871 emails lifted from Weiner’s computer, 11,112 emails are Huma… and pay to play- including Saudis and Israeli’s.  Meaning Huma was the one Hillary USED to communicate with foreign leaders via email for inside information and deals via Huma’s computer.

It has been established through many avenues, but mainly through Wikileaks, that the Clinton Foundation was just a farce set up in order to perform Pay-to-Play games with multiple entities, including foreign nations.  Pay-to-play nations include: Israel, Saudis, Turks, Qatar, kazakhstan,  and the Ukraine.

Futhermore, we are told by one of our insiders that one email unequivocally  confirms Isis was created by CIA and Israeli Secret Intelligence service, with help from Joe Lieberman, John McCain and Lindsay Graham!  Source

No, there is no shortage of bad press on Senator John McCain—even recently. And let’s not forget he trashed Obama’s “Affordable Care Act” every chance he got, chanting “Repeal and Replace” to thunderous applause from his constituents, then turned around and cast the deciding vote to stop President Trump’s repeal and replacement bill at the last moment—and we mean right down to the wire. He says one thing and does another. He betrayed Americans—again.

I’m willing to bet one of those “sealed indictments” the Justice Department is coddling was written up for John McCain. We will be hearing more about this in the near future.  ~ BP


8.25.18 – McCain Dead or Faking Dead. Pressure is Tangible. Something big is coming SOON!