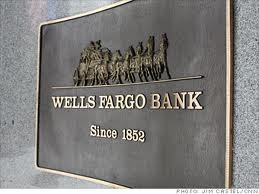 Wells Fargo lied about the quality of thousands of loans it certified
for a federal insurance program, a decision that ultimately cost the
government $190 million in claims when those loans failed, according to a
civil lawsuit filed by federal prosecutors on Tuesday.

From Jan. 1, 2002 through Dec. 31, 2010, Wells Fargo intentionally
concealed the problems with 6,320 loans it had determined were
"seriously deficient" from the Federal Housing Administration, which
insured the loans, according to the complaint filed in Manhattan federal
district court. The bank didn't report the problems with the loans even
after its own risk department conducted reviews that according to one
bank employee, unearthed "a dirty underbelly of bad loan officers," the
lawsuit claims.

“As the complaint alleges, yet another major bank has engaged in a long
standing and reckless trifecta of deficient training, deficient
underwriting and deficient disclosure, all while relying on the
convenient backstop of government insurance," said Manhattan U.S.
Attorney Preet Bharara, who brought the case, in a statement.

Wells Fargo is one of hundreds of banks permitted to certify mortgages
for government backing by the FHA. Should these loans fail, the FHA, a
division of the U.S. Department of Housing and Urban Development, will
reimburse whoever holds the loans for the charges they incurred.

Because of this guarantee, millions of moderate and low-income borrowers
who wouldn't otherwise qualify for a mortgage have been able to take
out a home loan. But an investigation by federal authorities has found
that many of these loans were improperly certified by bank mortgage
officers that ignored lending standards in an effort to pad their bonus
checks.

Citigroup, Flagstar Bank, Bank of America, Deutsche Bank and FBC
collectively have repaid the FHA $1 billion following legal settlements
in cases similar to the one brought against Wells Fargo.

In this case, federal prosecutors allege that Wells Fargo's brokers
issued loans that shouldn't have qualified, and then the bank lied about
it to the government. The lawsuit also alleges that Wells Fargo's bonus
incentive plan, which rewarded employees based on the sheer number of
loans approved, "was an accelerant to a fire already burning, as quality
repeatedly took a backseat to quantity."

“Many of the issues in the lawsuit had been previously addressed with
HUD,” the bank said in a statement. “Wells Fargo is the leading FHA
lender and has acted as a prudent and responsible lender with FHA
delinquency rates that have been as low as half the industry average.
The bank will present facts to vigorously defend itself against this
action. Wells Fargo is proud of its long involvement in the FHA program,
which has helped so many people obtain affordable mortgages and become
homeowners.”

Posts : 1827
Join date : 2012-02-15
Age : 66
Location : Ct
This is interesting as these loans are INSURED. So, why in the world would you lose your home if your loan has insurance?Are they double dipping? Hmmmmm, just where is the truth. Does this make sense....I think not. The bankers are in serious trouble IF, and I say IF, you understand how the system works. Here is a hint for those in trouble.......Was the banker at your closing....Unlikely...Why, they just "loaned" you a large sum of money....There is a reason and I will discuss this with those who care on a call that Purple is arranging...I think I can offer a bit of light into the "makes no sense" mortgage world....

You name the time and we will get this call going.

The way this system is going we need all of the info we can get!

And you are awesome to give your time so that we can all learn.

Let me know and will get the announcement up. YOU ROCK!!!!!!

» Wells Fargo's "How-to fraud mortgage manual" means this "Too Big To Fail" bank is going down
» EXOGEN:"WEALTH MANAGERS FROM WELLS FARGO HAVE BEEN CALLING PEOPLE TODAY SAYING WE NOW RECOGNIZE THE CURRENCIES YOU HOLD ARE REAL...EXCHANGES COMPLETED TODAY IN PA, WITH DONG AT $1.68 AT WELLS FARGO BANK"
» 10,000 CUSTOMERS LOCKED OUT OF THEIR BANK ACCOUNTS. Bank of America, Wells Fargo,Chase, ARE NEXT.Video
» Wells Fargo - SEC Violations, Rate Rigging, Contract Fraud
» Reality Check: How Does Nobody Go To Jail In Wells Fargo Fraud Case?