Ritual Mask of Legendary 7th century Maya King Pakal the Great has been unearthed in Mexico on Wed Aug 29, 2018 11:49 am

Archaeologists digging in Mexico's Palenque ruins have uncovered a mask believed to represent the 7th-century Maya ruler K'inich Janaab Pakal, commonly known a ‘Pakal the Great’ - one of ancient Mexico’s most prolific figures. Having become King at the age of 12, under Pakal the Great’s 68-year-long reign the ancient city of Palenque prospered and he instructed the building of its finest architecture. The newly discovered mask depicts Pakal in his old age at the end of his reign, a perfect rendition to accompany him on his way, according to a Reuters report .

Palenque, anciently known as Lakamha (literally: "Big Water"), was a Maya city state in southern Mexico dating from about 226 BC to AD 800. Located near the Usumacinta River in the Mexican state of Chiapas, about 130 km (81 mi) south of Ciudad del Carmen. The scientists from the National Institute of Anthropology and History (INAH) who discovered the mask, were equally as delighted with “other ritual objects” buried with it, such as: “ceramic figures, carved bones and flints” which were all excavated while working at “House E of Palenque's Palace building” according to the Reuters report. 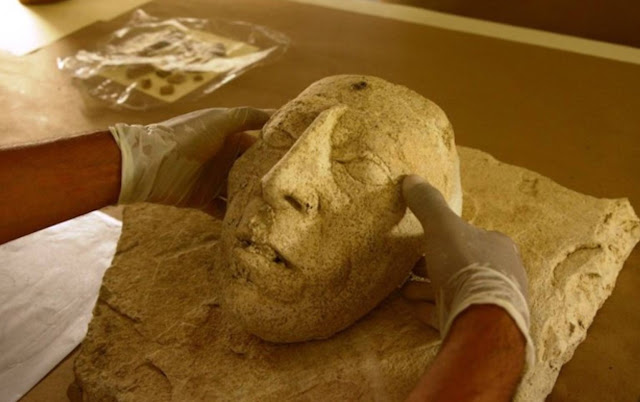 Newly unearthed mask of Pakal. Source: C: Héctor Montaño, INAH
Archaeologist Arnoldo Gonzalez who headed up the excavation told reporters that the mask "is not a representation of a god. After looking at some images, it's possible that it is Pakal the Great.” Gonzalez speculated that the king and his consorts had forged close religious connections with water and he told reporters that "During this process, under the (mask) head there were figurines, ceramic pieces, small plates, a lot of fish bones, which gives insight of a possible relationship with aquatics.” 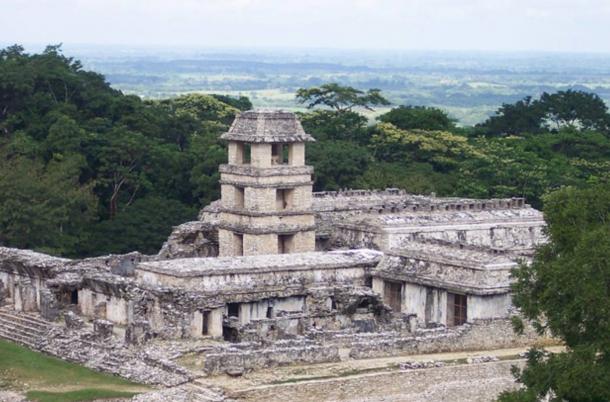 The palace and watchtower at Palenque. ( CC BY 3.0 )
Archaeologist Arnoldo Gonzalez who headed up the excavation told reporters that the mask "is not a representation of a god. After looking at some images, it's possible that it is Pakal the Great.” Gonzalez speculated that the king and his consorts had forged close religious connections with water and he told reporters that "During this process, under the (mask) head there were figurines, ceramic pieces, small plates, a lot of fish bones, which gives insight of a possible relationship with aquatics.” 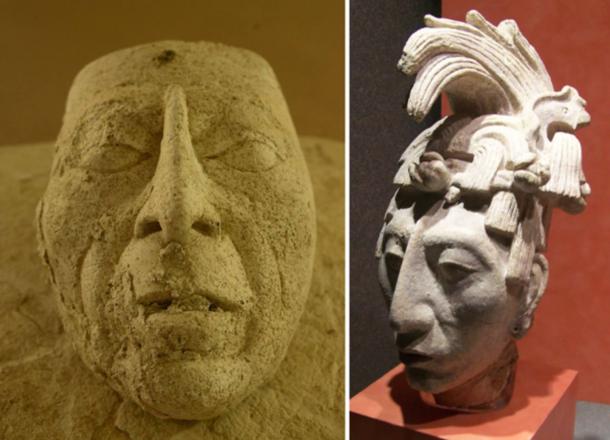 On examination the mask has been identified as likely a representation of Pakal the Great.
Left, Recently found mask (Image: Héctor Montaño, INAH);
Right, Stucco head of K'inich Janaab Pakal I ( 603-683 AD ), king of Palenque, housed at National Museum of Anthropology, Mexico-City ( CC BY-SA 2.0 )
Masks of Pakal the Great

Masks were essential components within Maya rituals and ceremonies and another ritually interred mask was dug up in 2015 by archaeologists in Mexico. This time it was a beautifully polished jade mask which had also been buried with “a treasure trove of small sacred items” which ritually marked the start of construction on the Teotihuacan Pyramid of the Sun almost 2,000 years ago, according to an article in Live Science .

Palenque is nowhere near as expansive as the more famous tourists site such as: Tikal, Chichen Itza , or Copán, but the sculpture, bas-relief carvings and architectural features of Palenque are like nothing else seen anywhere else in the Maya Empire. Only in July this year Ancient Origins covered the discovery of “hieroglyphic inscriptions on the largest stepped pyramid structure in Mesoamerica - spectacular Temple of the Inscriptions of Palenque,” which houses the tomb attributed to Pakal the Great. 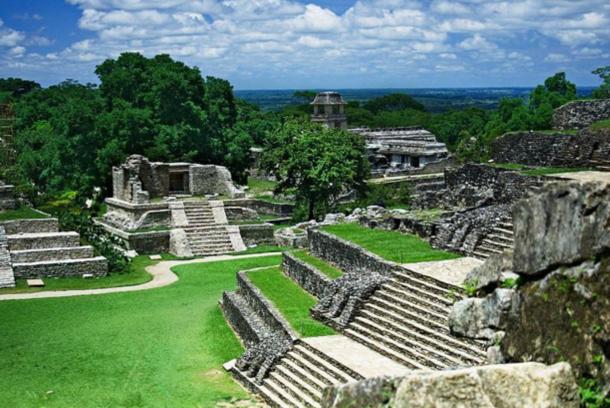 Tunnels to the Underworld

In 2016 archaeologists discovered a water tunnel beneath the Temple of Inscriptions and Archaeologist Arnoldo Gonzalez told The Guardian that “the Maya people would have believed the underground water tunnel would shuttle Pakal’s spirit into the Underworld.” But all of their architectural efforts to appease water deities and the passage of their souls in the afterlife was eventually to pass between 700 AD and 800 AD when the Maya culture collapsed. The city of Palenque was mysteriously abandoned and devoured by “cedar, mahogany, and sapodilla trees,” and not seen again for nearly 1000 years, until its rediscovery in 1950, according to a Michigan State University Article. 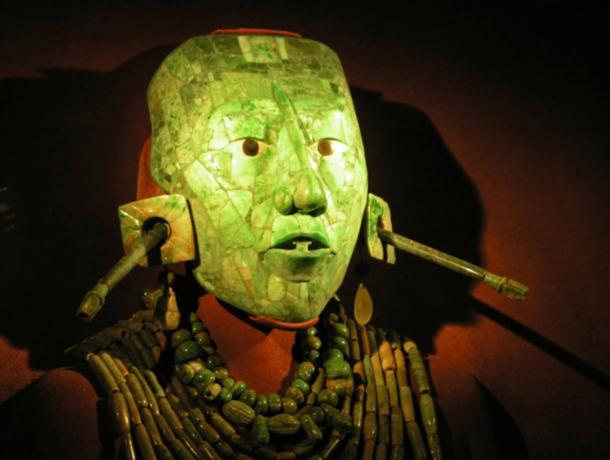 Jade death mask of Palak the Great was part of his mummy at the tomb discovered at Palenque in 1952. (

Today, almost all of what archaeologists know about the history of Palenque has been revealed through the inscriptions, and the clues these give were used in 2005 to calculate that we are currently looking at about 10% of the architecture, with over one thousand structures still to be cut from the trees, according to a report in The Guardian .
Thanks to: https://www.riseearth.com

In 2015 a team of researchers led by epigraphist Guillermo Bernal Romero from the National Autonomous University of Mexico (UNAM) deciphered a section of script at the tomb of Paka l the Great which translated to: “The House of the Nine Sharpened Spears.” An article in The Guardian reported that Bernal, from UNAM’s Mayan Studies Center, said that “The House of the Nine Sharpened Spears’ is guarded by “nine warriors in the walls of the tomb” and further adding to this “nine” architectural theme, this great funerary monument to Pakal was built on nine levels.