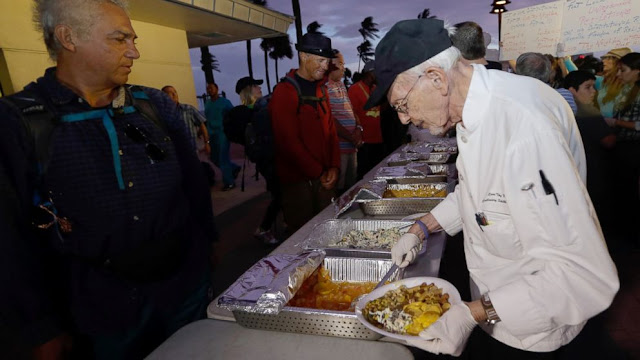 Do you remember this amazing ordeal? An elderly man—out of the goodness of his heart—chose to use his talent as a chef to feed the homeless. Even when the police cited him and told him that his kindness was a crime, he didn't stop. This gentleman didn't care how many tickets the apparently corrupt city wrote against him. No. He went right on doing what he knew was right by providing for his fellow man and eventually, the city conceded.

Today, Mr. Arnold Abbott is still doing his good work in Fort Lauderdale, Florida. On top of this already amazing story, there is yet another positive development.

It was initially angering to see the treatment of local philanthropist, Arnold Abbott, by police as he was initially cited and charged for his continued service and generosity to the poor. It was confusing to see such a sharp degradation of general conscience and goodwill among police and elected officials at that time. Thankfully, today, we see goodness being upheld by courts that have notable respect for humanity.

The original incidents involving police arrested and fining 90-year-old Abbott simply for feeding the poor occurred in 2014. According to research, the police responsible were following the direction of a corporately controlled police precinct and city which was reportedly more interested in maintaining the aesthetic appeal of their city than they were its people. Due to a number of backdoor corporate deals in the city of Fort Lauderdale, the city outlawed the feeding of the homeless without the possession of an expensive permit.

The draconian laws which considered property to be more important than human life were considered un-American and grossly inhumane by a good number of American citizens. However, this did not stop police from repeatedly punishing Abbott for his charity work.

History is dotted with similar acts of bravery by common people who stood up to tyranny for the sake of those in need, and who triumphed over the tyrants to meet the needs of the people.

The kindness and generosity of Mr. Abbott could be compared to that of many great figures of the past. Granted, any act of kindness could be considered sacred. However, Mr. Abbott endured persecution by police and local officials who seem to have held contempt for general kindness and humanity. Though it is unclear as to what caused these officials to divert so far away from general goodwill, it is good to see that corporate greed did not win this time around.

In present-day America, the corporate media has subtly and yet consistently asserted that the actions of any authority in the U.S. are a direct reflection of the standards of the president himself. If this principle is true, then it applies to everyone, in which case, former President Obama may be considered the worst thing to happen in America in a long time.

According to MSM reports at that time, police were cold, heartless, and in many cases, murderous. This was the image painted of police on prime-time television and granted the corporate media is now known for sensational distortion of reality, it may not be that all of these incidents were presented as they truly were. However, the corporate media at that time had no problem painting police officers in the worst light possible.

From what appeared to be staged murder scenes to real incidents of criminal violence by police, it seemed that during the two terms of Obama, many authoritative organizations took on a role of domestic terrorists. And yet just as soon as Obama left office, these incidents and their blanket media coverage seemed to abruptly end (though not entirely).

We may also keep in mind that the state of Florida is known for gross amounts of criminal corruption among police and state government. According to research, Florida has been ground zero for a laundry list of criminal organizations of compromised police precincts. From drug running to the staging and executions of alleged false flag shootings, the state government of Florida has made a reputation for itself an being highly questionable when it comes to ethical standards.

Whenever we see laws being created and enforced (whether new or old), it is important for us to evaluate the true ethical content of that law prior to accepting it as valid. When any law is found to be inhumane and falls below basic standards of respect for human life, that law becomes null and void, per the original spirit of common law. However, this does not stop some police officers and state officials from ignoring basic ethics and abusing their fellow man.

Just as history is filled with stories of the good-willed and kind people who helped those around them, the same history is filled with establishments that oppressed and punished good people for simply expressing themselves. This oppression is never actually imposed by those responsible for mandating it, but by third-party puppets of corrupt and wicked financial and governmental powers.


Just as in ancient history, we are presently facing corruption in high places (though thankfully, that corruption is presently being revealed). To add, we also have authoritative servants who have blindly followed the orders of the corrupt, not for the sake of maintaining peace or for common good, but simply because these authorities lacked the courage to stand up for real justice.

We are left with this dichotomy of charitable and good-willed people and those who stand for corruption and outright destruction of good in the world. Whichever of these we are faced with, it is possible to learn from both.

Yet even still, in the end, good always triumphs.

In a colorful decision that managed to invoke the Boston Tea Party, Lady Macbeth and Jesus of Nazareth, the 11th U.S. Circuit Court of Appeals ruled on Wednesday that feeding the homeless is “expressive conduct protected by the First Amendment.” The decision revives a challenge brought by a local chapter of Food Not Bombs, which sued Fort Lauderdale, Florida for requiring a permit to share food in public parks.

See also - WATERGATE WAS PEDOGATE - Has this Massive Scandal from the Past Come Full Circle?

Thanks to the city's ordinance, Fort Lauderdale has become infamous for cracking down on compassion. In 2014, police arrested a 90-year-old man and two ministers who were simply trying to share food with the homeless.

“We are very pleased with this ruling, and we look forward to continuing our community organizing in Fort Lauderdale,” Nathan Pim, a member of Fort Lauderdale Food Not Bombs and a plaintiff in the case, said in a statement. “We hope we are one step closer to something we've fought for over many years—simply being able to help people without being threatened with arrest by people who should be working with us.”


Every week at Stranahan Park in downtown Fort Lauderdale, Food Not Bombs offers free vegetarian and vegan meals to the public. Although many of the participants at these events are homeless individuals, Food Not Bombs is not a charity.

Originally started in the early 1980s by anti-nuclear activists in Cambridge, Massachusetts, Food Not Bombs protests war and poverty. Today, this network of social justice pacifists claims over 5,000 chapters worldwide. Writing for the court, Judge Adalberto Jordan explained that for the Fort Lauderdale chapter, “providing food in a visible public space” is “an act of political solidarity meant to convey the organization’s message.”

But in October 2014, Fort Lauderdale enacted an ordinance that bans sharing food in public parks, unless the hosts obtain a “conditional use permit” from the city. Event organizers also must comply with the city’s regulations for “social services facilities,” which cover “outdoor food distribution centers…used to furnish meals to members of the public without cost or at a very low cost.”

In February 2015, Food Not Bombs sued the city, claiming that the ordinance and associated park rule violated their right to free speech and free association, and were “unconstitutionally vague.” A year later, a federal district court dismissed their case, and held that their food sharing events were outside the scope of the First Amendment because they did not convey a “particularized message.”

But the Supreme Court rejected that line of reasoning more than two decades ago. In its 1995 decision, Hurley v. Irish-American Gay, Lesbian and Bisexual Group of Boston, the High Court ruled that Massachusetts could not force veterans organizing a St. Patrick’s Day parade to include gay, lesbian and bisexual individuals.


Writing for a unanimous court, Justice David Souter remarked that “the Constitution looks beyond written or spoken words as mediums of expression” and that “a narrow, succinctly articulable message is not a condition of constitutional protection.”

If the First Amendment were “confined to expressions conveying a ‘particularized message,’” Souter argued, then the Constitution “would never reach the unquestionably shielded painting of Jackson Pollock, music of Arnold Schoenberg, or Jabberwocky verse of Lewis Carroll.”

With that as precedent, the 11th Circuit ruled that to determine if an activity is expressive or not, “we ask whether the reasonable person would interpret it as some sort of message, not whether an observer would necessarily infer a specific message.” So for the Fort Lauderdale Food Not Bombs case, “the circumstances surrounding an event often help set the dividing line between activity that is sufficiently expressive and similar activity that is not.”

As Judge Jordan noted, walking or sitting down aren’t usually considered “expressive conduct,” but they certainly convey a message in the context of a picket line, a parade, or a sit-in. Likewise, when viewed in their full context, the Food Not Bombs events are “more than a picnic in the park.”

Since the chapter's events are open to the public, occur against a backdrop of controversial homeless policies in Fort Lauderdale, take place near city government buildings, and involve “tables and banners (including one with its logo) and distribut[ing] literature,” the court concluded that a “reasonable observer would interpret its food sharing events as conveying some sort of message.”

“History may have been quite different had the Boston Tea Party been viewed as mere dislike for a certain brew and not a political protest against the taxation of the American colonies without representation,” Jordan wrote.

Having ruled that Food Not Bombs does have a First Amendment right to share food, the 11th Circuit sent the case back down to the lower court to determine if the city’s ordinance violates those rights. The City of Fort Lauderdale did not immediately respond to a request for comment.