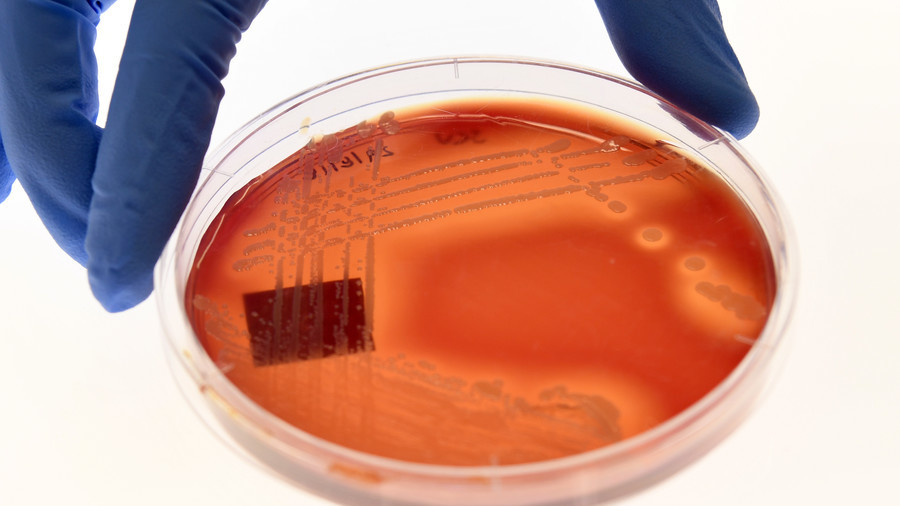 The superbug Staphylcocus epidermidis on an agar plate in Melbourne on September 4, 2018.

Doctors are warning of a potentially fatal and “formidable” pathogen which has spread to hospitals across the globe and is resistant to all known antibiotics.
A team of researchers from the University of Melbourne in Australia discovered three multidrug-resistant strains of Staphylococcus epidermidis which emerged in recent decades and spread globally. The team studied samples from 78 medical institutions across 10 countries, releasing their findings in the journal Nature Microbiology on Monday.
“Often it just colonises the skin,” researcher Ben Howden said as cited by ABC News Australia. “It doesn’t necessarily lead to infection. But in a smaller number of people it can lead to a serious, invasive infection requiring complex treatment.”
READ MORE: ‘Pack those condoms’: Sex health docs warn rare STI could become ‘superbug’
S. epidermidis, a relative of the better-known MRSA superbug, is found commonly on human skin, and poses no real threat to the majority of the human population. However, people who have compromised immune systems, are recovering from surgery or have implanted medical devices such as catheters or joint replacements are susceptible to the potentially-severe and sometimes fatal infection.
“The discovery is really that there’s this bacteria that’s been spreading in hospitals around the world somewhat unrecognised for a number of years,” Howden said. “This is just another example of the use of antibiotics driving bacteria to become more and more resistant.”

The study concludes that hospital practices, including inappropriate prescription of antibiotics in intensive care units may “have driven the evolution of this organism, once trivialized as a contaminant, towards potentially incurable infections.”
“It can be deadly, but it’s usually in patients who already are very sick in hospital... it can be quite hard to eradicate and the infections can be severe,” Howden said.
“This highlights that the use of more and more antibiotics is driving more drug-resistant bacteria,” he warned. “With all bacteria in a hospital environment we are driving more resistant strains and there’s no doubt that antibiotic resistance is one of the biggest dangers to hospital care worldwide.”
Think your friends would be interested? Share this story!


Thanks to Bridgette for the forward and: https://www.rt.com