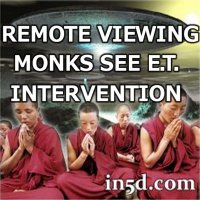 According to these tourists remote viewers are seeing world powers
in the course of self-destruction. They also see that the world will
not be destroyed. Between now and 2012 the world super powers will
continue to engage in regional wars. Terrorism and covert war will be
the main problem. In world politics something will happen in and around
2010. At that time the world powers will threaten to destroy each other.

Between 2010 and 2012, the whole world will get
polarized and prepare for the ultimate dooms day. Heavy political
maneuvers and negotiations will take place with little progress.


In 2012, the world will start plunging into a total destructive nuclear war.

And at that time something remarkable will happen, says, Buddhist
monk of Tibet. Supernatural divine powers will intervene. The destiny of
the world is not to self-destruct at this time.
Scientific interpretation of the monks, statements
makes it evident that the Extra Terrestrial powers are watching us every
step of the way. They will intervene in 2012 and save the world from
self-destruction.

When asked about recent UFO sightings in India and
China, the monks smiled and said the divine powers are watching us all.
Mankind cannot and will not be allowed to alter the future to that great
extent.

Every human being, through their current acts in life
called "Karma," can alter the future lives to some extent, but changing
the destiny in that large extent will not be allowed to that great an
extent.

Monks also mentioned that beyond 2012 our current civilization
would understand that the final frontier of science and technology is in
area of spirituality and not material physics and chemistry. Beyond
2012, our technologies will take a different direction.
People will learn the essence of spirituality, the relation between
body and the soul, the reincarnation and the fact we are connected with
each other are all part of "God.

In India and China UFO sightings have increased in many folds.
Many say the Chinese and Indian Governments are being contacted by the
Extra Terrestrials.

In recent days most UFO activities have been seen in those countries who have indigenously developed Nuke capabilities.

According to the remote viewers, our earth is blessed and is being
saved continuously from all kinds of hazards all the time that we are
not even aware of. As our technologies progress we will realize how
external forces saved us.