Today at 7:31 am by PurpleSkyz

Today at 7:17 am by PurpleSkyz

» The Moon is About to Pass Through the Earth's Shadow - Penumbral Lunar Eclipse, June 5 2020

» Easter Island is Far More Mysterious Than We First Thought

» Alan Watts ~ Returning To The Inner Self

Today at 7:03 am by PurpleSkyz

Today at 6:59 am by PurpleSkyz

Today at 6:58 am by PurpleSkyz

Today at 6:53 am by PurpleSkyz

» 5 Theories About The Universe That Will Blow Your Mind

Yesterday at 4:31 pm by PurpleSkyz

Admin
Posts : 93252
Join date : 2012-01-04
Location : Woodstock Nation
Hurricane Florence To Intensify “To Near Category 5 Strength” And There Are 12 Nuclear Power Reactors In The Carolinas 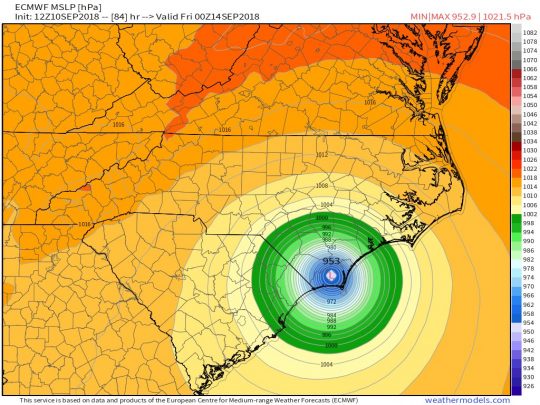 The latest forecast is projecting that Hurricane Florence will strengthen “to near category 5 strength” before it makes landfall in the Carolinas, and it is being called “a serious threat to lives and property” .  It is extremely rare for a hurricane of this intensity to come this far north, and one expert is claiming that Florence “has the potential to be the most destructive hurricane we’ve had in modern history for this region.”  At this time, the government is warning of “a life-threatening storm surge” of up to 20 feet or higher, “life-threatening freshwater flooding”, and “damaging hurricane-force winds”.  But there is another factor that not a lot of people are talking about.  There are 12 nuclear power reactors in the Carolinas, including two that are located right along the coast.
According to Google , there are 7 nuclear power reactors in South Carolina…

It is the two reactors at the Brunswick plant that are of the most concern because they sit right along the coast and they are directly in the projected path of the storm.
The following is what Wikipedia has to say about those reactors…

The Brunswick nuclear power plant , named for Brunswick County, North Carolina , covers 1,200 acres (490 ha). The site is adjacent to the town of Southport, North Carolina , and to wetlands and woodlands, and was opened in 1975.
The site contains two General Electric boiling water reactors , which are cooled by water collected from the Cape Fear River and discharged into the Atlantic Ocean .

In a worst case scenario, could we potentially be facing America’s version of Fukushima?
Hurricane Florence greatly intensified on Monday.  This is an excerpt from the very latest NOAA forecast …

1. A life-threatening storm surge is likely along portions of the coastlines of South Carolina, North Carolina, and Virginia, and a Storm Surge Watch will likely be issued for some of these areas by Tuesday morning. All interests from South Carolina into the mid-Atlantic region should ensure they have their hurricane plan in place and follow any advice given by local officials.
2. Life-threatening freshwater flooding is likely from a prolonged and exceptionally heavy rainfall event, which may extend inland over the Carolinas and Mid Atlantic for hundreds of miles as Florence is expected to slow down as it approaches the coast and moves inland.

3. Damaging hurricane-force winds are likely along portions of the coasts of South Carolina and North Carolina, and a Hurricane Watch will likely be issued by Tuesday morning. Damaging winds could also spread well inland into portions of the Carolinas and Virginia.

And according to the National Hurricane Center in Miami, there is definitely a possibility that Hurricane Florence could still strengthen into a category 5 storm …

Experts weren’t ready to rule out the possibility that Florence could even make landfall as a Category 5 hurricane, a feat never achieved by any recorded storm in the region. Dennis Feltgen, a spokesperson for the National Hurricane Center in Miami, says that reaching Category 5 is “certainly a possibility.” If Florence doesn’t undergo a phenomenon known as an eyewall replacement cycle , which would weaken the storm, it has a chance of reaching the 157-mph boundary line and making history, Feltgen says.

As I mentioned earlier, it is very rare for a storm of this magnitude to make landfall this far north …

Landfalling Category 4 hurricanes are rare in the mainland U.S., with just 24 such landfalls since 1851—an average of one every seven years. (Category 5 landfalls are rarer still, with just three on record). All but three of these 27 landfalls by Cat4s and Cat5s have occurred south of South Carolina’s latitude; thus, Florence will be in very select company if it manages to make landfall at Category 4 strength in North or South Carolina.

We only have a couple of previous storms to go on in order to evaluate how bad the storm surge might be.  Unfortunately, water can pile up to enormous heights in this particular region because the continental shelf “extends out more than 50 miles from shore” …

It’s a good thing that landfalls by such strong hurricanes are rare along the South Carolina and North Carolina coast, since this coastline is extremely vulnerable to high storm surges. Two of these three historical Carolina Category 4 hurricanes generated a storm tide of 18 – 20 feet: Hugo of 1989 and Hazel of 1954. The other storm–Gracie of 1959–did not (it hit at low tide, significantly reducing the coastal flooding). The storm tide is the combination of the storm surge and the normal lunar tide, measured in height above sea level. The National Hurricane Center uses the terminology “height above ground level” when discussing the storm tide, meaning the height the surge plus tide gets above the normal high tide mark.
The high vulnerability of this coastline is because the continental shelf extends out more than 50 miles from shore, creating a large region of shallow water less than 150 feet deep just offshore that forces storm surge waters to pile up to staggering heights.

In a worst case scenario, we could be talking about an unprecedented mountain of water slamming into the Carolina coastline.
In fact, it is being projected that if Hurricane Florence becomes a category 5 storm that we could see a storm surge of up to 33 feet …

WU’s storm surge inundation maps for the U.S. coast , computed using NOAA’s SLOSH model, tell a frightening story. Depending on where its center makes landfall, a mid-strength Category 4 hurricane with 145 mph winds hitting at high tide, in a worst-case scenario, can generate a storm tide in excess of twenty feet above ground level along the entire coast of South Carolina, and along most of the coast of southern North Carolina from the South Carolina border to Morehead City. Many locations could see a higher surge, of up to 27 feet. And a Category 5 storm is much worse: a theoretical peak storm tide of 33 feet is predicted by the SLOSH model for the Intracoastal Waterway north of Myrtle Beach, South Carolina. These peak surges occur over a 10 – 40 mile stretch of coast where the right eyewall makes landfall.

Let us hope that does not happen, because it is hard to imagine the immense devastation that such a storm surge would cause.
And remember – the two nuclear power reactors right along the coast at the Brunswick facility are directly in the path of this storm.

As news about the intensity of this storm has spread, “panic prepping” has been happening all over the Carolinas.  The following comes from Zero Hedge …

With memories of the devastation wrought by Hurricanes Harvey, Irma and Maria still fresh in the minds of US consumers, residents of South and North Carolina are taking zero chances as Hurricane Florence – now a Category 4 storm – barrels toward the eastern seaboard. According to local media reports, store shelves have been cleared of vital supplies like bottled water and food as anxious southerners brace for the worst-case scenario.
Shelves at Wal-Marts in North Carolina and South Carolina had been cleared out by Sunday evening, forcing the stores to frantically restock shelves as residents loaded up on everything from water to plywood to generators, per WGN9. Flashlights and batteries also flew off the shelves.

Of course if people had been prepared ahead of time, they would not have to be scrambling for rapidly disappearing supplies at the stores.
And it is being projected that more than a million people will evacuate from coastal areas by the time that this storm reaches shore…

Hurricane Florence is plowing toward the East Coast as a Category 4 storm with a 500-mile wing span, forcing dire warnings and mandatory evacuations – including the entire coastline of South Carolina and parts of Virginia and North Carolina.
In South Carolina alone, more than 1 million residents and tourists are expected to flee from coastal areas, Gov. Henry McMaster said Monday, vowing that state officials “are not going to gamble” with people’s lives.

This is an extremely dangerous storm, and I strongly urge those that live in the region to play it safe.
You can always replace property, but we only get one chance at this life, and so please do not be reckless with yours.
This article originally appeared on The Economic Collapse Blog .  About the author: Michael Snyder is a nationally syndicated writer, media personality and political activist. He is publisher of The Most Important News and the author of four books including The Beginning Of The End and Living A Life That Really Matters .


Hurricane Florence is the biggest threat in the Atlantic right now, but it’s hardly the only storm. The tropics have gone wild, with three hurricanes spinning at the same time, as you can see for yourself in satellite imagery captured as the sun rose on the Atlantic Monday morning. 3 hurricanes are currently sweeping across the Atlantic Ocean. From left to right, Florence, Isaac and Helene. via Earther
In addition to rapidly-strengthening Florence (which just hit Category 3 status), Helene and Isaac became hurricanes on Sunday. More than 2,000 miles separates the three hurricanes so the only way to view them all together is from space. This picture is kind of terrifying!
Luckily, there’s a way to do that thanks to GOES 16.
The National Ocean and Atmospheric Administration released imagery on Monday showing the eye of hurricane Florence. The swirl of clouds around the hurricane’s center, which is starting to clear out, are a sign it’s strengthening as expected.
Now, may I offer you one last view courtesy of astronauts? The International Space Station passed over the Atlantic on Monday morning, and here are absolute amazing images of Florence: Picture of the terrifying eye of Hurricane Florence from space (ISS). via Twitter / Rick Arnold Picture of Hurricane Florence from space (ISS). via Twitter / Rick Arnold
This is the eleventh time on record that three hurricanes have been active at the same time in the Atlantic. The most recent time was last year, when Irma, Jose and Maria all reached hurricane status at the same time. The scars of Irma and Maria are still clear in the Caribbean and Florida.
The forecasts for Florence and Isaac are disconcerting as well, making it hard to really savor the views from space.
While Helene is likely to steer off into the central Atlantic and poses no immediate risk to land, Florence is rapidly strengthening and is likely to reach the Southeast or Mid-Atlantic by Thursday as a very strong hurricane with a major storm surge risk. It’s quite possible it could stall out over land and dump copious rainfall inland, creating the potential for historic flooding. 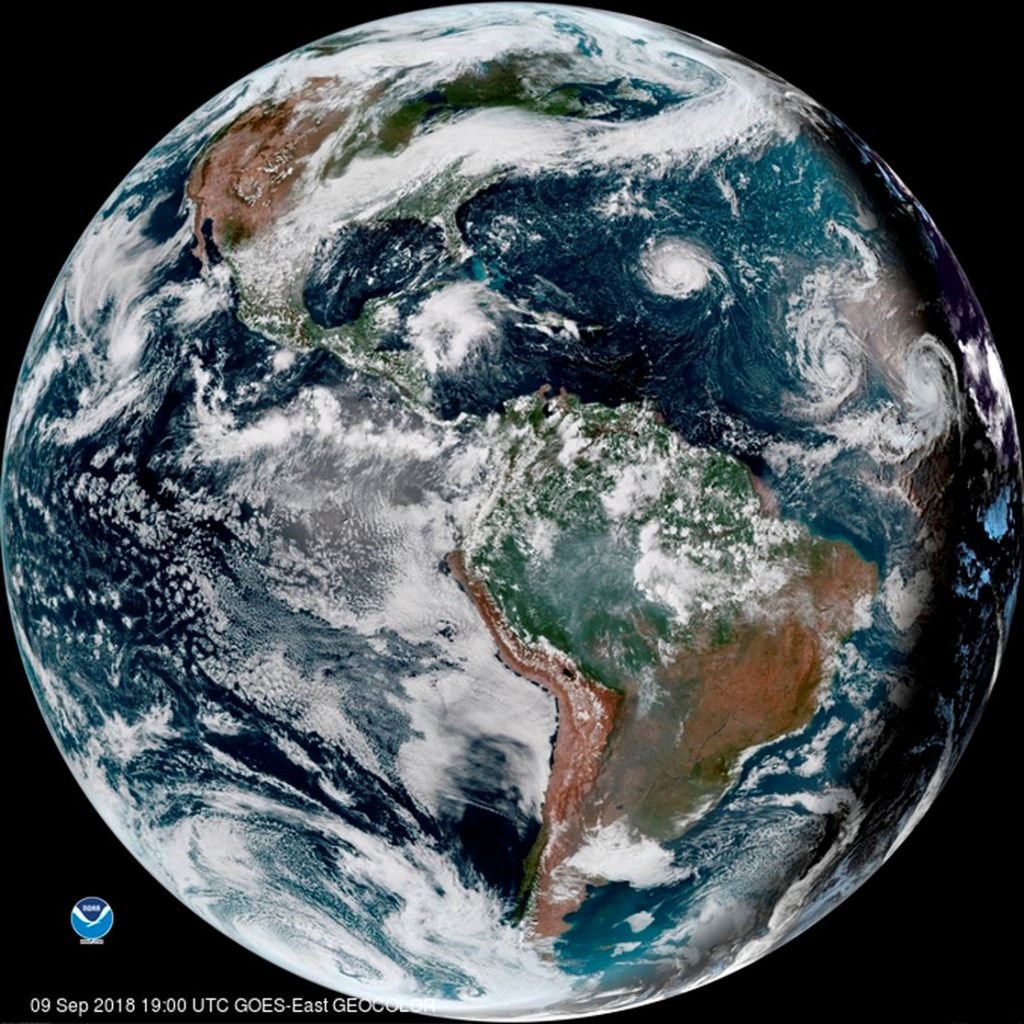 Another view of the 3 hurricanes currently in the Atlantic Ocean. via NOAA
Meanwhile, Isaac is plowing toward the Caribbean and the Lesser Antilles. While it’s a small hurricane, it could still bring rain and storm surge to a number of islands from Barbados to Antigua. Puerto Rico is also within the storm’s forecast cone, though there’s a lot that can happen between now and this weekend to change its exact track. Still, it’s a storm that bears watching.