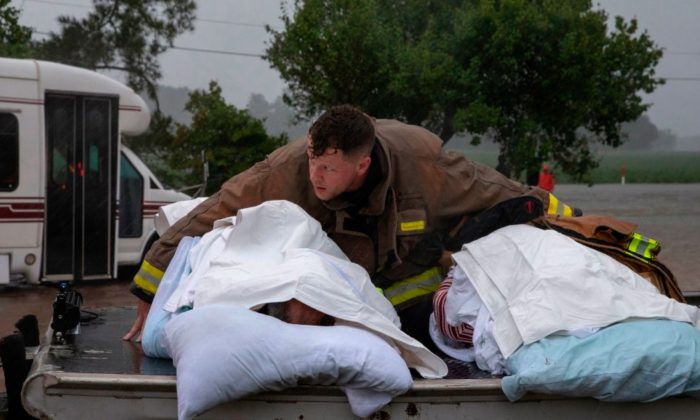 A Lumberton firefighter holds on to two nursing home patients as a member of the Cajun Navy drives his truck during the evacuation of a nursing home due to rising flood waters in Lumberton, North Carolina, on September 15, 2018 in the wake of Hurricane Florence. - Besides federal and state emergency crews, rescuers were being helped by volunteers from the 'Cajun Navy' -- civilians equipped with light boats, canoes and air mattresses -- who also turned up in Houston during Hurricane Harvey to carry out water rescues. (Photo by Alex Edelman / AFP/Getty Images)
Deadly Storm Florence’s Rising Floodwaters Devastate North Carolina
By Reuters
September 17, 2018 Updated: September 17, 2018
WILSON/WILMINGTON, N.C.—Deadly storm Florence drenched North Carolina with more downpours on Sept. 16, cutting off the city of Wilmington, damaging tens of thousands of homes, and threatening worse flooding as rivers fill to bursting point.
The death toll rose to at least 15 from Florence, which crashed into the state as a hurricane on Sept. 14, bringing record rainfall.
The storm had weakened to a tropical depression by Sept. 16 but was forecast to drop a further five to 10 inches of rain in North Carolina, bringing rainfall totals in some inland areas to 15 to 20 inches and over 30 inches closer to the coast, according to the National Hurricane Center.
“The storm has never been more dangerous than it is right now,” Gov. Roy Cooper told a news conference. Many rivers “are still rising, and are not expected to crest until later today or tomorrow.”
More than 900 people were rescued from rising floodwaters, and 15,000 remain in shelters in the state, Cooper said.

South Carolina’s governor issued a similar warning, urging anyone in a flood-prone area to evacuate.
“Those rivers in North Carolina that have received heavy rainfall are coming our way,” Gov. Henry McMaster said during a news conference. “They have not even begun (to crest). But they will. And the question is how high will the water be, and we do not know.”
At least 10 people have died so far in the storm in North Carolina, including a mother and child killed by a falling tree, state officials said. Five people died in South Carolina, including three in car accidents and two from carbon monoxide poisoning from running a generator indoors.
Officials urged those who evacuated to stay away.
“Our roads are flooded, there is no access into Wilmington,” New Hanover County Commission Chairman Woody White told a news conference. “We want you home, but you can’t come yet.”
In New Bern, a riverfront city near North Carolina’s coast, the storm tore away porch steps, splintered balconies, and sent a yacht plowing into a garage that shattered like kindling.

Anne Francis Coronado came back on Sept. 16 to inspect the damage with her husband.
“There’s mud all over the floor and the wood floors have buckled,” she said, adding that they planned to return to her brother’s house because of the musty smell that pervades their home.
“We’ve been through hurricanes here but we’ve never had it come anywhere close to this.”

In Leland, a low-lying city north of Wilmington, homes and businesses were engulfed by water.
Gas stations were abandoned, with many pumps keeled over, and fallen trees cluttered many roads, making them impassable. The whir of generators could be heard throughout the city, a sound not expected to dim soon as crews work to restore power.
About 668,000 homes and businesses were without power in North and South Carolina and surrounding states, down from a peak of nearly 1 million.
In Belville, North Carolina, just south of Leland, some shops had power restored on Sept. 16.
“I thought I’d come out here and see if I could get more fuel, but no luck,” Steve McLean said outside a Harris Teeter gasoline station that had electricity, but no gasoline.
“So far, we’ve been holding up pretty well,” said McLean, 72, a self-employed heating and air conditioning contractor. “We’ll see how long this lasts.”
Five people were arrested for breaking into a Dollar General Store,  according to the police department in Wilmington, which has imposed a nighttime curfew.

Florence set a state record for rain from a hurricane, dumping 33.9 inches in Swansboro, N.C. The previous record was 24 inches, set by Hurricane Floyd, which killed 56 people in 1999, said Bryce Link, a meteorologist with private forecasting service DTN Marine Weather.
North Carolina officials warned motorists not to drive on roads in a large area—south of the I-64 and east of the I-73/74 highways—because of hazardous conditions in the southeastern part of the state. Swelling rivers and creeks threatened dams and bridges.
The flooding could taint waterways with murky coal ash. Meanwhile, officials said the state’s many lagoons of toxic hog waste had so far withstood the storm.
By early Sept. 6, Florence’s winds had dropped to about 35 miles per hour, the National Hurricane Center in Miami said. The storm was moving at 10 mph, with its center expected to cross the western Carolinas during Sept. 16 and into the Ohio Valley and the Northeast United States on Sept. 17–18.
The White House said President Donald Trump has approved making federal funding available in some affected counties. Trump, who plans to visit the region this week, tweeted his condolences.
By Anna Mehler Paperny & Ernest Scheyder