» Tech Billionaires Are Buying A Lot Of Farmland pt 2, It's Amazing No One Noticed!

Yesterday at 2:24 pm by Consciousness Of Economic

» THIS WOMAN PULLS APART A COVID SWAB TO SHOW YOU HOW THE FIBERS [NANOBOTS?] ARE ALIVE AND MOVING.

Yesterday at 2:23 pm by Consciousness Of Economic

Yesterday at 2:21 pm by Consciousness Of Economic

Yesterday at 2:19 pm by Consciousness Of Economic

» Be Prepared for a Possible Seed Shortage

Yesterday at 2:16 pm by Consciousness Of Economic

Yesterday at 2:15 pm by Consciousness Of Economic

» Agent Orange: Bone-Chilling Photos Of The War Crime The US Government Got Away With

Yesterday at 2:02 pm by Consciousness Of Economic

OUT OF MIND » THE INSANITY OF REALITY » GOVERNMENT & THE NEW WORLD ORDER » Deep State Unmasked: DOJ Official Resists ‘From Inside’ and ‘Can’t Get Fired’

Deep State Unmasked: DOJ Official Resists ‘From Inside’ and ‘Can’t Get Fired’ 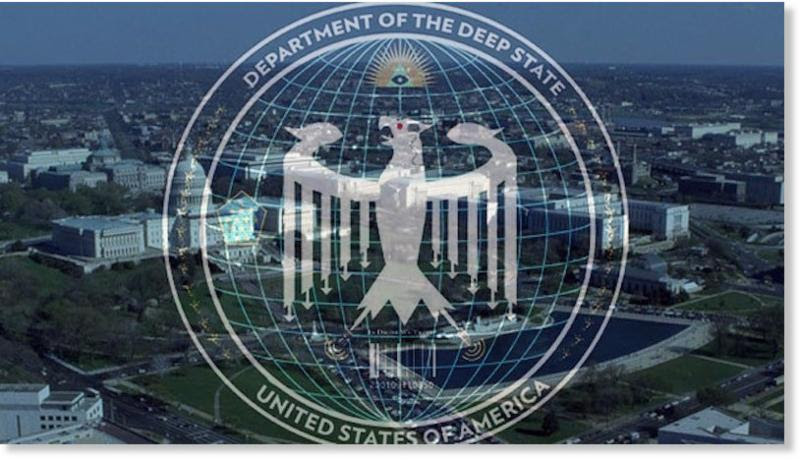 Deep State Unmasked: DOJ Official Resists ‘From Inside’ and ‘Can’t Get Fired’


This is the second hidden-camera video released this week by Project Veritas’ James O’Keefe, as part of his new series, ‘Unmasking the Deep State’ and in what he promises will be incrementally egregious revelations. He has suggested that the series will reveal the identity of the author of The New York Times’ Op-Ed (!)
So far, we’ve seen videos from his undercover agents who’ve penetrated the US State Department, the Department of Health and Human Services and the Department of Justice. We’ve watched Federal employees explain, on-camera and in their own words, how they work daily to undermine the White House during business hours, using Federally-owned equipment and resources. In other words, the US Taxpayer is underwriting the seditious activities of these Federal employees.
O’Keefe has called the Deep State an unelected cabal of Federal workers, who are “basically stomping on the Constitution. They are in all branches of government and they are hiding among the 2.5 million Federal employees…Americans make their voices heard through elections and these people are circumventing that. Members of the Deep State view themselves as having nothing to lose. A lot of them brag about how they can’t get fired.”
O’Keefe says that past experience has prepared him to become the subject of vicious attacks by the Mainstream Media, which he notes, “Doesn’t make any sense to me, because their whole reason for being is to expose government corruption!”
He expects to be attacked for his hidden-camera methods, claiming it’s unethical to record people without their consent, to which he says, “Let me address that…it is not unethical, certainly not when another person is present to the conversation doing the recording. Surreptitious recordings are not an invasion of privacy.
“Through establishing a rapport with these government officials, which we did over the course of six months, outside of their offices, we had no duty to keep the information that they gave us confidential. We did not entrap these people. Their images and voices capture their character much more accurately than an ocean of words on newsprint could. This is them on video.
“The things that make people uncomfortable about undercover journalism the the brutal reality of it. The rawness, the irrefutability of it is precisely why it’s so great it causes people embarrassment. Well, good. Maybe people ought to be more embarrassed about what they’re doing.
“Undercover recordings are not unethical but I’ll tell you what is unethical: The abuse of anonymous sources over the last two years is highly, highly unethical. One commentator described the…poetic license taken by Bob Woodward. He described him as a ‘Washington ventriloquist’…
“Woodward offers second-hand quotes in this book, Fear from anonymous sources, secondhand quoting other people, months after the events allegedly take took place! We don’t do that. We film the anonymous sources and give them to you. Anything less is to abandon the very reason for journalism’s existence.
“Unlike Woodward and Bernstein, we won’t quote anonymous sources in the Administration, relaying to you what happened. We basically just show them to you and unlike the New York Times’ Op-Ed page, we won’t omit the name of the author to ‘protect them from losing their job.’
“Federal job security is so great, Federal workers are more likely to die than lose their jobs…so, when we release these stories, we’ll give you the names and faces of who’s doing it. You’ll be able to see his name and face. You’ll be able to see his title, his employer, his demeanor, his arrogance. You’ll be able to see his lack of introspection, his greed, him bragging about how nobody will ever hold him and his ‘comrades’ – that’s a word that he uses – accountable.
“But there’s a deeper theme here: Transparency belongs to government. Privacy belongs to the people. The media has that in reverse…
“The people in Washington…serve their own interests, as you all know. So, this is a great injustice. So, we must gun mask and show you the faces of who these people are. The government exists with the consent of the governed and that consent cannot be manufactured. The truth must be pursued at all costs. That’s why we call it Project Veritas: Project Truth. Our main goal is to deliver truth to the masses, which is the core the whole purpose of journalism…
“We’re gonna expose these people, because notoriety will expose them and it may deter others…We are confident Americans are going to do the right thing. People have no idea how bad it is – not even close. The Executive and Legislative branches of government may have to buck up and do the right thing, for once. Perhaps they will restore the Separation of Powers. Perhaps they’ll do civil service reform…
“We’re gonna search for every rotten, crooked, no-good Deep State Federal official, we’re going to release them, one at a time. We’re going to unmask you, we’re going to find you, we’re going to make you Internet-famous!
“And for Jack Dorsey and Mark Zuckerberg, who will inevitably have to send their engineers in to tinker with algorithms and shut down morality, I will say to you that they can’t stop us all. They can’t shadow ban everyone in this room – and if they really want to do that, then I say, ‘Screw them! Go ahead!’ And we will turn our cameras on to the Twitter and Facebook engineers, as they do it.
“This is going to be an information revolution. It’s going to be viral. It’s going to be big.”

OUT OF MIND » THE INSANITY OF REALITY » GOVERNMENT & THE NEW WORLD ORDER » Deep State Unmasked: DOJ Official Resists ‘From Inside’ and ‘Can’t Get Fired’