This amazing photo was captured by Rover 1A as it was bouncing or hopping over the surface of asteroid Ryugu on September 22, 2018. The bright white region is due to sunlight, while the blue area is a distortion, also caused by sunlight. Image via JAXA/Hayabusa2.
JAXA, Japan’s space agency, said on Saturday, September 22, 2018, that two rovers released by its Hayabusa2 spaceraft have set down successfully on asteroid Ryugu, hundreds of millions of miles from Earth. The spacecraft traveled for four years before encountering Ryugu. JAXA has now released images taken by the rovers as they were ejected from the mother spacecraft, as well as other images captured as one of the probes bounced or hopped on the asteroid’s surface. JAXA said: Rover-1B acquired this image on September 21, shortly after separation from the spacecraft. The photo shows the surface of asteroid Ryugus as seen from about 180 feet (55 m). The misty top left region is due to the reflection of sunlight. Image via JAXA/Hayabusa2.
Ryugu is a space rock with a diameter of less than a mile (about 1 km) and classified as a potentially hazardous asteroid, with an orbit that occasionally brings it into Earth’s vicinity. The encounter and release of the small rovers occurred early on September 21 at a distance of 194 million miles (313 million km) from Earth.
The distance is so huge, that images sent by the Hayabusa2 spacecraft and its rovers take some 35 minutes to reach our planet. This spectacular photo shows asteroid Ryugu as well as the spacecraft shadow visible on the surface, as Hayabusa 2 was descending on September 21, 2018, to release the pair of rovers. The image was taken from about 443 feet (135 meters) from the space rock. Image via JAXA/Hayabusa2.
Hayabusa2 arrived at asteroid Ryugu on June 27, 2018. Afterwards, for several weeks, the spacecraft remained at a distance of about 12 miles (20 km) above the asteroid. During the week of July 16, operations were begun to lower this hovering altitude, eventually bringing the spacecraft to less than 4 miles (6 km) from the asteroid surface.
According to JAXA, the rovers were released from an altitude of about 180 ft (55m). Small rovers (MINERVA-II) via JAXA.
The MINERVA-II rovers look more like cylinders or robotic wheels, and use capacitors and small solar cells for power.
Although the mission will measure Ryugu’s gravity, it is estimated to be some 60,000 times weaker than Earth’s gravity. This means that instead of roving over the surface of Ryugu, the rovers will be hopping and rotating over the surface, which is a wise design for exploring the huge asteroid despite its weak gravity. 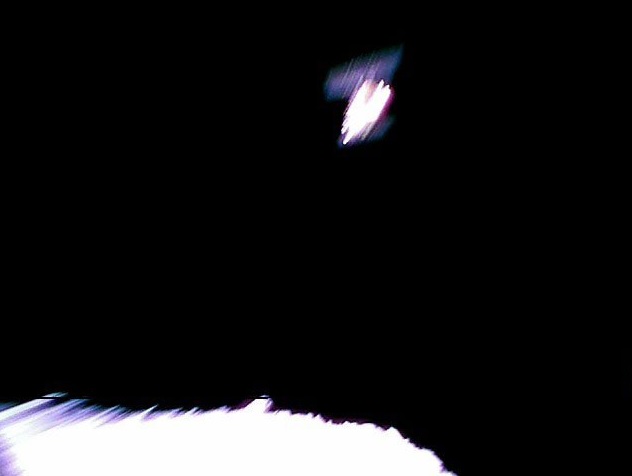 Although this image is blurred because the rover was spinning, Hayabusa2 is seen above asteroid Ryugu on this photo taken by rover 1A shortly after it separated from its mother spacecraft (Hayabusa2), on September 21, 2018. Image via JAXA/Hayabusa2.
Each rover measures about 7 inches (18 cm) in diameter and has a pair of cameras and a thermometer among its instruments.
On October, 2018, the Hayabusa2 spacecraft will release Mascot, a lander built by the space agencies of France and Germany. Mascot will also land on the surface of Ryugu.
The Hayabusa2 spacecraft was launched on 2014, and arrived at the huge asteroid after travelling some 2,000 million miles (3,200 million km). The spacecraft will be studying Ryugu until December, 2020, when it is expected to start traveling back to Earth with collected samples from the asteroid surface, to be analyzed by scientists in laboratories. 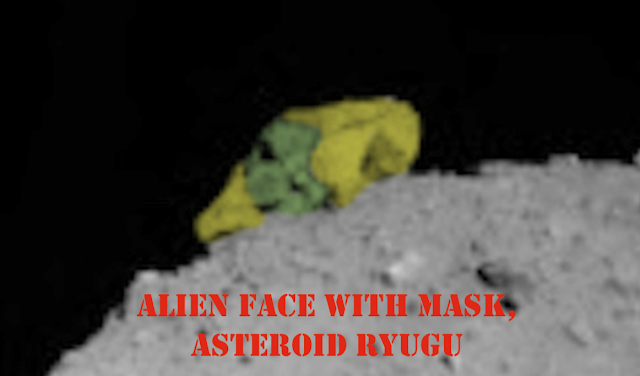 I found a large alien face on the astroid called Ryugu today. This is an astroid that is currently being examined by two Japanese mini rovers, so hopefully we will get some more great photos to search over.

The face is wearing a hat covering tis head and a mask covering its mouth and chin area. The eye, cheek, forehead area are all visible. The alien has an extended cranium, much like many have come to expect from some species of aliens.

I believe the hat and mask on the person is a cultural tradition, much like a muslim woman covering up her face and head...and yes, this does appear to be a female.

The astroid is 3,000-foot-wide (900 meters) across, so this head would be less than 1/7 the diameter...so the head would be about 128.57 meters across. Also the current value of Ryugu for mining purposes is speculated to be US$82.76 billion. 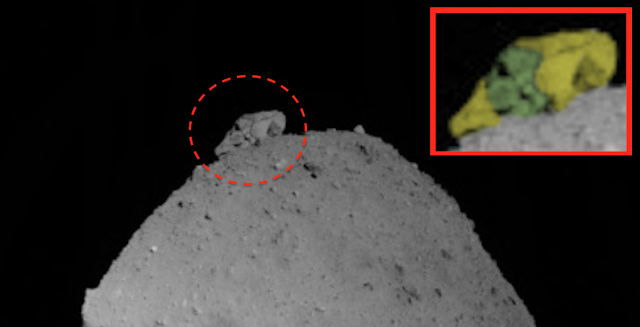 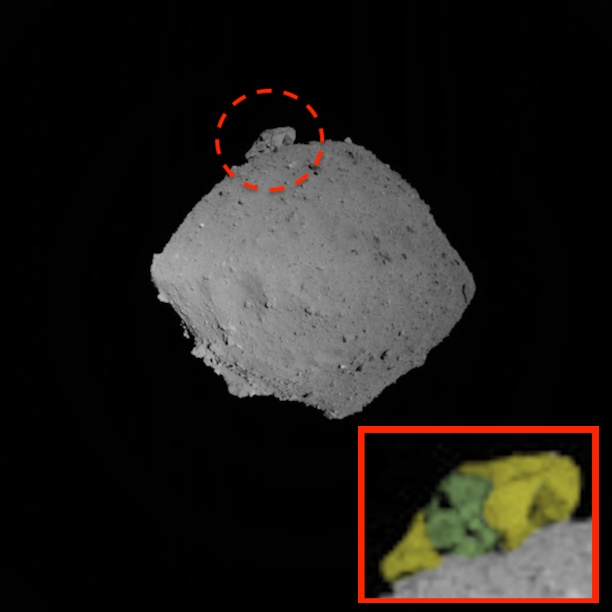