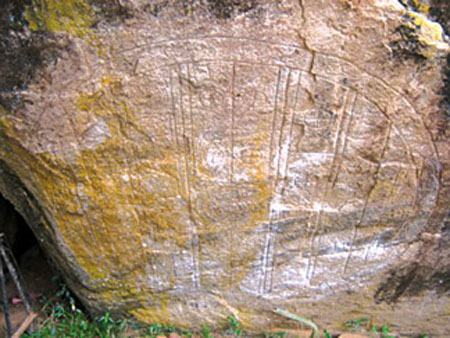 
Hey guys, I am in Sri Lanka and there is a very strange stone artifact in a place called Ranmasu Uyana. Here, in an isolated place, you can find this weird circular carving which has baffled both archeologists and visitors. It has a very complex design, which looks similar to an electric circuit diagram or a technical drawing and people of Sri Lanka believe that this is a stargate, a portal through which Gods came from different planets. Archeologists do not know when it was created but it is generally accepted that this about 6500 years old, which means that you are looking at one of the oldest carvings in the world. This is older than the pyramids in Egypt and the Stonehenge in England. But what is the meaning of this complex carving? This is known as Sakwala Chakraya in Sri Lanka, which means the wheel of the Universe. Sakwala means Universe in Sinhala language and Chakraya means Wheel in Tamil and Sanskrit. Why is it called the wheel of the Universe? And more importantly, if mainstream archeologists believe that this is a just simple stone carving, why is it protected with an iron fence? Locals say that there is a strange energy coming out this carving at certain times and it is not advisable to stand or sit very close to it. Here is an elderly gentleman who tries to show me that the stargate emits strange energy. He demonstrates this using a sacred talisman tied to a string, and it begins rotating right away. This rotating motion can be easily faked, but I do have something called an EMF detector. This will show even very small changes in energies. And you can see that the EMF meter's needle immediately goes all the way to the other side, which means there is a very high level of energy coming from this. This meter only shows up to 5 Milligauss, but this rock must be emitting a much higher level of magnetic flux. This clearly means that there is something strange going on here. What is even stranger is that, this is not a continuous flux and we can see this only at certain times. When I tested this again a few minutes later, there was no reading. Remember, I have already shown you yet another Stargate in India. This place has been completely fenced off, so there was no way to detect the EMF there. What is the purpose of these stargates? According to Sri Lankans, this 6 foot tall stargate is not only a portal through which the Gods came down from the sky, but if used properly, even human beings can travel to other parts of the Universe, through this stargate. We can see that there are several seats carved right in front of this carving. Locals insist that if human beings sit long enough and absorb the energy coming out of it, they would be able to travel and reach the Gods.Another theory is that focusing intensely on these 7 circles in the middle of the diagram would cause hallucinations and induce astral travel and other psychedelic experiences. Some people also believe that Lord Buddha himself visited this stargate at least 3 times and he was able to operate this and travel to other planets. Some tantric Buddhists still visit this place at night, light up oil lamps, and go into a very deep state of meditation, in an attempt to open this stargate. It is believed that intense focusing or touching these symbols in a specific combination can open the portal to heavens. The western world believes that the concept of Ancient Aliens started in the last 50 years, but in the Asian continent, people have believed this for thousands of years. This gentleman who meditates daily in this place, believes that Hindu Gods came to earth using this stargate. You Know Skanda? 12 hands and 6 faces? They also aliens. Me: Skanda is Alien? Him: Yeah. Him: BhadraKali means Young Time. They also aliens. Properly and exactly you cannot say that, but slightly we are getting that smell, the shadow. It is not from this world. He has never seen or heard anything about the term "ancient aliens", but you can see how firmly he believes that Gods came down from the sky. Archeologists have completely denied that this has anything to do with aliens or advanced technology. However, what they claim is even more baffling. Mainstream archeologists insist that this is a world map, and it is the oldest world map that exists. But they offer no evidences to prove this theory. If mainstream archeologists are right, how did early human beings, who, according to them were primitive people, carve such an advanced diagram? The carving is so technically advanced that no one is able to decode it even today. It has plenty of symbols which are similar to modern day gadgets we use. These 2 concentric circles look remarkably similar to induction coils or magnetic coils. #Search4Truth #Srilanka #AncientAliens