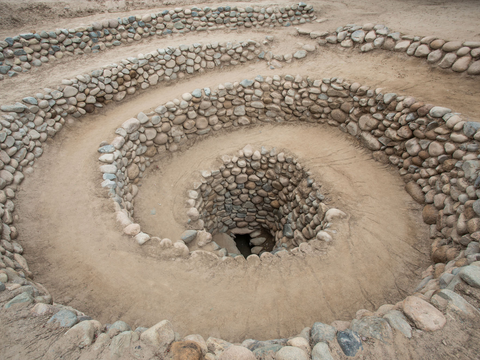 
Support Our Fight Against Academic Fallacies: Patreon: https://www.patreon.com/MysteryHistory Facebook: https://www.facebook.com/MysteryHisto... Twitter: https://twitter.com/Mysterytweetery Steemit: https://steemit.com/@mysteryhistory Narration By Don Moffit: www.DonMoffit.com The Nazca lines, unquestionably one of the most enigmatic ancient sites on earth. Enormous ancient artworks, that since their modern discovery, a number of individuals have attempted to, and seemingly failed to adequatly explain. Created to such enormous scale, many of these theories put forward, demanded the utilisation of advanced, ancient flying machines just to enable their full appreciation. However, what many are not aware of, is another, particular other baffling structure, that litters Nazca. Known as “puquios,” they are stone structures which corkscrew deep into the ground, each connected to a channel of ground water, far below the surface. It must be noted, for many millennia the ancient sites these mysterious structures connected, and indeed the locations in which they are found within, have endured brutal episodes of drought, and for any ancient civilisation to have flourished here, would have required tremendous skills and ingenious solutions. And the puquios could undoubtedly be perceived as striking examples of this. Displaying this ancient groups high level of intelligence. Not only that, but we feel, strong indication of a civilisation, who had drastically more capability and technology at their disposal, then that of the Incas. And although modern academia attempt to discreetly shrug off such astonishing works of ancient genius, with the simple term “pre- incan,” we believe that these pre-incans they speak of, were once part of a civilisation, far in advance of anything funded individuals will ever willingly admit to. As explained by Rosa La Saponara, from the Institute of Methodology and Environmental, Analysis of satellite imagery within Italy, has actually discovered a remarkable past function, to these once mysterious spiral holes. They have realised that they were actually an ancient, complex hydraulic system, designed to extract and move groundwater over tremendous distances, beneath the arid landscape above them. According to La Saponara, examining satellite images has allowed scientists, to analyse the movement of pumped water throughout the desert. Quote, “All holes were interconnected via a system of tunnels, similar to modern subways. Each spiral hole appeared to serve the function of a pump, filling the tunnels with air and directing the water to a specific location. In this way water flowed to ancient settlements where it was most desired, from areas of abundance.” End quote. It seems that Scientists have been forced to reluctantly admit, due to the overwhelming evidence of the systems sophistication, that the original engineer’s knowhow and workmanship, was of such high quality, that not only does it rival modern water delivery systems, but even after several millennia, many of the Puquios still function perfectly. Furthermore, to have initially built them, the builders required as yet, undiscovered advanced equipment, such as air pumping technologies. Mechanisms, far out of the realms of any academically studied ancestor. They also required an intimate understanding of geology,,, many metres below their feet. And indeed, the understanding of how they were going to manipulate, future movement of the groundwater below. Also, intriguingly, many parts of these tunnels, successfully pass through tectonic faults, as if they had prior advance knowledge of these also. We personally find this discovery of the puquios past function, as nothing short of miraculous. Making them some of the strongest evidence for not only a highly advanced pre-Incan culture, but of a technologically developed ancient people, with in depth knowledge of geology, hydrology and many other seemingly modern understandings, developed through the utilisation of advanced, technologically accomplished study. They are undoubtedly, highly compelling. https://en.wikipedia.org/wiki/Nazca_L... https://en.wikipedia.org/wiki/Puquios