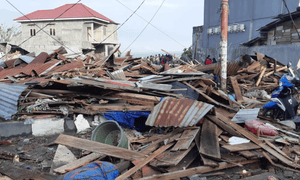 Communications were down across the Indonesia island of Sulawesi on Saturday after a powerful 7.5 magnitude earthquake and subsequent tsunami decimated communities across central Sulawesi, leaving scores dead and hundreds of buildings destroyed in the city of Palu and the surrounding area.
According to Agence France-Presse, at least 384 people died in the city of Palu, which was among the hardest-hit cities in the disaster. At least 540 have been injured, and 29 are listed as missing. The death toll is expected to swell since tens of thousands of Indonesians were visiting the city for a festival. Officials warned that the death toll was likely to rise as many more remote towns in the region have proven difficult to reach, including the city of Donggala. A landmark city bridge was among the list of destroyed music in Palu as waves up to 10 feet high swept across the city.

The quake struck near central Sulawesi at a depth of 10 kilometers just before 1100 GMT, early in the evening local time. Such shallow quakes tend to be more destructive according to Philippine Star. It was more powerful than a series of tremblors that struck the island of Lombok and neighboring Sumbawa in July and August, leaving hundreds dead and tens of thousands displaced.
Photos and video of the earthquake, tsunami and their aftermath depicted piles of debris where buildings once stood, and corpses strewn across the ground.
One particularly gruesome photo showed a man carrying the muddy corpse of a small child.
“I just ran when I saw the waves hitting homes on the coastline,” said Palu resident Rusidanto, who like many Indonesians goes by one name.
Indonesian President Joko Widodo told the press that the military was being called in to help search-and-rescue teams save victims and find bodies.
A spokesman for the government’s disaster recovery agency told reporters that telecommunications were damaged by the quake and a subsequent storm, adding that the government hoped international satellites would be able to provide backup.
“We hope there will be international satellites crossing over Indonesia that can capture images and provide them to us so we can use the images to prepare humanitarian aid,” the spokesman said.
People living hundreds of miles from the quake’s epicenter said they felt the quake, which followed a smaller jolt that killed at least one person.


The Palu airport was closed after the tsunami and was expected to stay closed for at least 24 hours, increasing the difficulty of relief efforts. The Friday quake was felt as far south as Makassar, the island’s largest city, and on nearby Kalimantan, situated on the Indonesian portion of Borneo.
Notably, the first quake hit just as evening prayers were about to begin in the world’s biggest Muslim majority country. They also took place on the holiest day of the week, when mosques are especially busy.
Officials described to destruction to the BBC.

“Many bodies were found along the shoreline because of the tsunami, but the numbers are still unknown,” Sutopo Purwo Nugroho, a spokesman for the agency, told Reuters.
“When the threat arose yesterday, people were still doing their activities on the beach and did not immediately run and they became victims,” he told a news briefing.
“The tsunami didn’t come by itself – it dragged cars, logs, houses – it hit everything on land.”
[…]
“The situation is chaotic, people are running on the streets and buildings collapsed. There is a ship washed ashore,” said Dwikorita Karnawati, head of Indonesia’s meteorology and geophysics agency.

Indonesia is one of the world’s most “disaster-prone” nations thanks to its location straddling the Pacific Ring of Fire, a region that includes frequent quakes and volcanic eruptions. The ring circles almost the entire Pacific rim, and is home to more than half of the world’s active volcanoes above sea level. A deadly quake and tsunami in 2004 killed nearly a quarter of a million people, including nearly 120,000 in Indonesia.