OUT OF MIND » THE INSANITY OF REALITY » GOVERNMENTS & THE NEW WORLD ORDER » MASSIVE WIN – NAFTA Loophole Closed – Canada and Mexico Agree to U.S. Approval Authority of *ANY* Future Trade Agreements With Third Parties…

Posted on October 1, 2018 by sundance
Biggest U.S. Trade Win in the History of all U.S. Trade Constructs !

I’m still going through the USMCA text (even speed reading, it will likely take a while); here’s the link to the AGREEMENT DETAILS.  However, many people have asked about how the NAFTA loophole was being closed.
Well, the answer is exactly what it had to be – there was really no option.  The U.S. now has veto authority over any trade deal made by Canada and/or Mexico with third parties.  This is what Ambassador Lighthizer described as the “Third pillar”.
Last year, despite the inevitability of it, we didn’t think Canada and Mexico would agree to it.  The NAFTA loophole was/is a zero-sum issue: Either Can/Mex agree to give veto authority to the U.S. –OR– President Trump had no option to exit NAFTA completely.
Well, Canada and Mexico have agreed to the former, so there’s no need for the latter.

[url=https://ustr.gov/sites/default/files/files/agreements/FTA/USMCA/32 Exceptions and General Provisions.pdf](LINK to Article 32 pdf)[/url]
Both Canada and Mexico structured key parts of their independent trade agreements to take advantage of their unique access to the U.S. market.  Mexico and Canada generate billions in economic activity through exploiting the NAFTA loophole.  China, Asia (writ large), and the EU enter into trade agreements with Mexico and Canada as back-doors into the U.S. market.  So long as corporations can avoid U.S. tariffs by going through Canada and Mexico they would continue to exploit this approach.
By shipping parts to Mexico and/or Canada; and by deploying satellite manufacturing and assembly facilities in Canada and/or Mexico; China, Asia and to a lesser extent EU corporations exploited a loophole.  Through a process of building, assembling or manufacturing their products in Mexico/Canada those foreign corporations can skirt U.S. trade tariffs and direct U.S. trade agreements.  The finished foreign products entered the U.S. under NAFTA rules.
Why deal with the U.S. when you can just deal with Mexico, and use NAFTA rules to ship your product directly into the U.S. market?
This exploitative approach, a backdoor to the U.S. market, was the primary reason for massive foreign investment in Canada and Mexico; it was also the primary reason why candidate Donald Trump, now President Donald Trump, wanted to shut down that loophole and renegotiate NAFTA.
This loophole was the primary reason for U.S. manufacturers to relocate operations to Mexico.  Corporations within the U.S. Auto-Sector could enhance profits by building in Mexico or Canada using parts imported from Asia/China.  The labor factor was not as big a part of the overall cost consideration as cheaper parts and imported raw materials.
If the U.S. applies the same tariffs to Canada and Mexico we apply to all trade nations, then the benefit of using Canada and Mexico -by those trade nations- is lost. Corporations will no longer have any advantage, and many are likely to just deal directly with the U.S. This is the reason for retaining the Steel and Aluminum tariffs on Canada and Mexico.
Take away the market access and the ability for Mexico and Canada to broker themselves for economic benefit, and both nations would lose hundreds of billions in economic activity.  It was the NAFTA fatal flaw.

From the POTUS Trump position, NAFTA always came down to two options:
Option #1 – renegotiate the NAFTA trade agreement to eliminate the loopholes.  That would require Canada and Mexico to agree to very specific rules put into the agreement by the U.S. that would remove the ability of third-party nations to exploit the current trade loophole. Essentially the U.S. rules would be structured around removing any profit motive with regard to building in Canada or Mexico and shipping into the U.S.
Canada and Mexico would have to agree to those rules; the goal of the rules would be to stop third-party nations from exploiting NAFTA.  The problem in this option is the exploitation of NAFTA currently benefits Canada and Mexico.  It is against their interests to remove it.  Knowing it was against their interests President Trump never thought it was likely Canada or Mexico would ever agree.  But he was willing to explore and find out.
Option #2 – Exit NAFTA.  And subsequently deal with Canada and Mexico individually with structured trade agreements about their imports.  Canada and Mexico could do as they please, but each U.S. bi-lateral trade agreement would be written with language removing the aforementioned cost-benefit-analysis to third-party countries (same as in option #1.)
All nuanced trade-sector issues put aside, the larger issue is always how third-party nations will seek to gain access to the U.S. market through Canada and Mexico.  [It is the NAFTA exploitation loophole which has severely damaged the U.S. manufacturing base.]
U.S. Trade Representative Robert Lighthizer had been working with Mexican and Canadian officials on different ways to remove this problem.  However, in any solution where the one-sided NAFTA benefits are removed, Mexico and Canada lose.  Therefore Canada and Mexico had no choice by to approach the negotiations as a zero-sum game.
In the USMCA Canada and Mexico have now [url=https://ustr.gov/sites/default/files/files/agreements/FTA/USMCA/32 Exceptions and General Provisions.pdf]accepted OPTION #1[/url] and granted the U.S. approval and veto authority over any trade agreement made with a third party.
Canada and Mexico have taken a knee !!

When I heard of the new deal with Mexico and Canada I cringed a bit inside. I remembered all the times we have reported on the North American Union and how politicians were pushing it left and right. It would open up our borders to all included. ... Oh joy, imagine that!

While I could be wrong.. Hmmmmmm 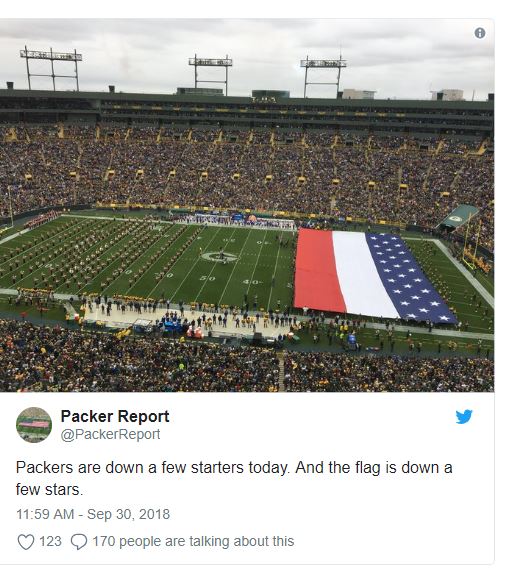 Hell, what’s in the new NAFTA?

Before Sunday’s kickoff against the Bills, Green Bay paid tribute to Buffalo’s geographic decision (maybe) by unfurling something that definitely wasn’t the American flag.​

OUT OF MIND » THE INSANITY OF REALITY » GOVERNMENTS & THE NEW WORLD ORDER » MASSIVE WIN – NAFTA Loophole Closed – Canada and Mexico Agree to U.S. Approval Authority of *ANY* Future Trade Agreements With Third Parties…