OUT OF MIND » THE INSANITY OF REALITY » SCIENCE & TECHNOLOGY » Water Vortices: A New Source Of Alternative Energy? 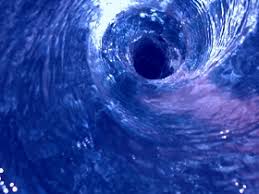 Switzerland
has emerged as a world leader in renewable energies. As innovative
ideas are hatched, researchers seek out technologies and techniques to
put them into practice. In 2009, the only gravitation water vortex plant
in Switzerland to date was commissioned in the village of Schöftland
(canton of Aargau). The future is looking bright for this new form of
hydroelectric power generation.


A new type of power plant

Gravitation water vortex plants are built directly on top of the
river bed. They require a minimum water level of only 0.7 m and a
minimum quantity of approx. 1,000 litres per second. Thanks to simple,
easy-maintenance and innovative technology, these plants are small,
robust and built to last, with a maximum shelf-life of 50 to 100 years.

A gravitation water vortex plant
functions differently from traditional hydroelectric facilities. It has a
rotation tank equipped with a central outlet above which a stable,
symmetrical vortex forms. It then drives the turbine thanks to the
gravitational force between the turbine and the outlet. With 20
rotations per minute, the turbine powers the generator, which transfers
the resulting electricity to the power grid. The turbine therefore
generates neither high levels of pressure nor backflow water.
Gravitation water vortex plants meet “clean tech” specifications due to
the fact that 97% of electricity production is CO2-free.

The advantages of this type of power plant are many. Not only are
they driven by a simple and reliable technology, they are also easy to
maintain, compact, and inexpensive. Water vortex plants are also good
news for the environment. Their construction will restore the body of
water (e.g. a river) on which they are built, benefiting nature and the
local community alike. The innovative technology behind these facilities
means that they pose no threat to the fish population, as they are able
to bypass the rotor downstream and upstream. A further advantage is the
improved cleaning efficiency of natural micro-organisms thanks to the
higher oxygen levels resulting from the regular aeration of the water.

Water vortex plants have little impact on the local environment as
most of the construction work is below ground. With correct planting,
the basin itself can be hidden, rendering the entire facility virtually
invisible.

The village of Schöftland in the canton of Aargau is home to the
first gravitation water vortex power plant in Switzerland. Opened in
2009, the plant, which measures 6.5 metres in diameter and has a height
of fall of 1.5 metres, can generate between 10 and 15 kW, depending on
the volume of water. This is equivalent to an annual output of 80,000 to
130,000 kWh, enough to cover the yearly electricity needs of around 20
to 25 Swiss households (50-60 people). It is owned by the Genossenschaft
Wasserwirbelkraftwerke Schweiz (cooperative of gravitation water vortex
power plants Switzerland) and WWK Energie GmbH, the Swiss centre of
excellence for vortex power plant development and research. This pilot
project enjoys the backing of Dr. Bertrand Piccard, a high-profile
figure in energy circles. The pioneering water vortex plant is named in
his honour.


The arrival of the new power plant was roundly welcomed, ultimately
winning the Federal Office of Energy (FOE) 2011 Watt d’Or award in the
“Renewable Energies” category. Although the cash value of the prize is
zero, its marketing and publicity value is huge. Besides receiving a
certificate and trophy, Watt d’Or prizewinners gain not only a quality
label but also a higher media profile and an enhanced reputation thanks
to the award.


As far as the GWWK is concerned, the medium- to long-term future is
clear. First, the wider community must get behind decentralised and
carbon-neutral renewable energy production. Second, Switzerland, in its
capacity as a global centre of excellence, must take the necessary
action to make sure that alternative energies are generated effectively,
reliably and sustainably. This will require the planning and
construction of gravitation water vortex plants in as many suitable
locations as possible across the country.

OUT OF MIND » THE INSANITY OF REALITY » SCIENCE & TECHNOLOGY » Water Vortices: A New Source Of Alternative Energy?