by Becky Little
History.com
Laser technology helped detect more than 60,000 previously unknown structures in northern Guatemala.
The largest-ever survey of a region from the Maya civilization has located over 60,000 previously unknown structures in northern Guatemala. The survey, conducted with the help of lasers, challenges long-held assumptions that this area was poorly connected and sparsely populated.
The structures researchers identified include farms, houses and defensive fortifications, as well as 60 miles of causeways, roads and canals connecting large cities across the civilization’s central lowlands. Sarah Parcak, an archaeologist who uses satellite technology, had this reaction on Twitter when preliminary images became public: “This is HOLY [expletive] territory.” (Parcak was not involved with this study).
The ancient Maya civilization stretched from southern Mexico down to Guatemala and Belize, flourishing between 1000 B.C. and 1500 A.D. The recent study focused on 830 square miles of the Maya Biosphere Reserve in Petén, Guatemala. Scientists used a laser technology called lidar, or light detection and ranging, to penetrate the thick tree canopies in the area and discover archaeological remains beneath them. 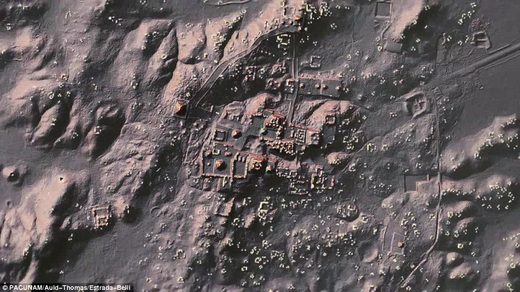 The experts also say the discovery shows the ancient people modified the wetlands for their agricultural needs, and even created networks of roadways to connect distant cities and towns 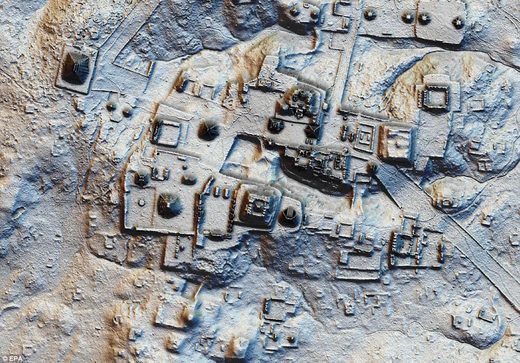 EPA
Newly released images have revealed a stunning look at the site of an ancient Mayan ‘megalopolis’ in Guatemala, which now lies buried beneath the jungle foliage. Using LiDAR technology, the researchers are able to probe the dense jungle foliage to accurately map out the structures hidden beneath, as seen above

Lidar can point researchers in the right direction, but it doesn’t find everything under the trees. That’s why researchers also needed to excavate areas where lidar identified ancient structures. The Washington Post reports that “the lidar analysis was conservative-[researchers] found the predicted structures, and then some.”
Past archaeologists believed the central Maya lowlands in northern Guatemala consisted of small, disconnected city-states ruled by warring elites. More recently, archaeologists have theorized that the area was more interconnected and densely populated that originally assumed. 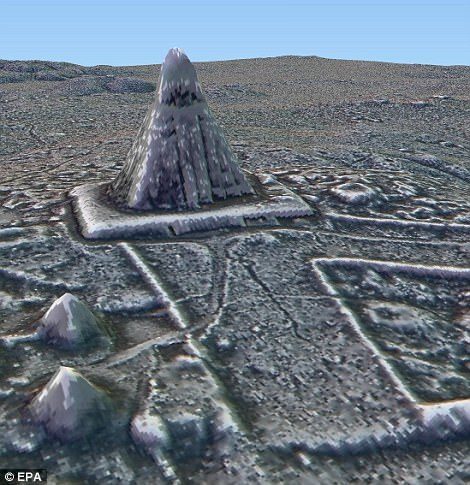 EPA
Their findings revealed a pyramid in the heart of the ancient Maya city of Tikal, a major tourist destination in northeastern Guatemala. The new discoveries include urban centres with sidewalks, homes, terraces, ceremonial centres, irrigation canals and fortifications

EPA
Aircraft with a LiDAR scanner produced three-dimensional maps of the surface by using light in the form of pulsed laser linked to a GPS system. As well as previously unknown structures, the images show raised highways that linked together urban centers and quarries

“Even though the latter view has been ascendant in recent years, the absence of regional data has left the debate unresolved,” write the researchers in an article about their study published this week in Science. Now, they write that their research provides “robust support” for the view that the central lowlands had a complex structure and supported a large population.
“Every Maya city was bigger and more populated than we previously thought,” archaeologist Francisco Estrada-Belli, one of the study’s authors, told Science News.
The newly-discovered structures, together with the modified agricultural terrain the study also identified, leads researchers to estimate that 7 million to 11 million Maya people lived in northern Guatemala during the civilization’s Late Classic Period from 650 to 800 A.D. The survey, the authors write, “compels a reevaluation of Maya demography, agriculture, and political economy.”