OUT OF MIND » TRUTH IN CONSPIRACY THEORIES? » HISTORIES MYSTERIES » Who Built Machu Picchu's Temple Of 3 Windows? 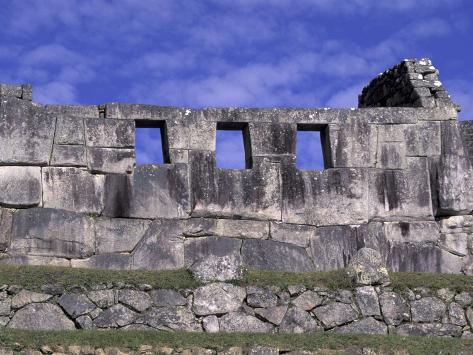 
Support Our Fight Against Academic Fallacies: Patreon: https://www.patreon.com/MysteryHistory Facebook: https://www.facebook.com/MysteryHisto... Twitter: https://twitter.com/Mysterytweetery Steemit: https://steemit.com/@mysteryhistory Narration By Don Moffit: www.DonMoffit.comMachu Picchu. Unquestionably one of the most recognisable ancient ruins on earth. It is a place that is found high on countless an astute, explorer’s bucket list, and for good reason. Placed far away from modern civilisation, requiring a 10 hour trek along the Inca trail to reach. However, when one arrives at the site, they are rewarded with an astonishing array of ancient feats of engineering. There are many anomalous characteristics of this pre-Incan site, which although ignored by academia, we intend to explore here upon our channel. One of these peculiar, and as yet unexplained features, is the temple of three windows. Located west of the main square, this sacred temple, formed with the use of gigantic megalithic blocks, is adorned with three, still existing trapezoidal-shaped windows, aligned with the path of the sun, allowing its rays to pass through them, at differing times of the day, brightly illuminating the "Sacred Plaza" beyond. It is one of the many inexplicable features of Machu Picchu, and indeed pre-Incan Peru, which laughs in the face of currently attested academic theory, and its attempts to explain how such sites were initially built. Most funded archaeologists claim, Machu Picchu was constructed as an estate, for an Incan emperor known as Pachacuti, between 1438 to 1472. However, we disagree with this claim, due to the exquisite nature of the sites construction, the clearly advanced levels of architecture, specifically, but not exclusively pertaining to its complex irrigation, sanitation, and drainage systems, and indeed the precision displayed with the use of such enormous, multi-ton stones. These ancient megaliths, were not only, somehow, carried to the tops of these mountain top fortresses, but as the temple of the three windows clearly displays, masterfully cut to form the windows. Accomplishing such a refined finish to their surfaces, that to claim they were chiselled out using primitive tools, we find, not to be a viable, or indeed logical conjecture. It is clear to us, that whoever created this remarkable temple, had at their disposal, not only advanced highly capable transport systems, but stone cutting tools far out of the reach, of the academically claimed constructors. Furthermore, present upon the stones of the temple of three windows, also visible throughout ancient Peru, are enigmatic marks left by a tool, that we, the public, are yet to informed of. Intriguingly, these marks are not only visible upon the stones within Peru, but are also in abundance at the ancient quarry within Aswan. We have in the past, covered the pink granite columns found within the ancient temples of Baalbek, transported from the same quarry to Baalbek, a distance of over 1000 miles, these columns, we hypothesise, link the temple to the ancient pyramids, and these enigmatic stone cut marks, present at Machu Picchu, we assert, connect all three. We believe, that as more detailed, alternative research is undertaken upon these sites, the connections between them, or more specifically, the true creators of said sites, will become apparent as the same. Both religious and evolution theories, in their current forms, stifle this truth by their very nature. Yet thankfully, as more and more curious individuals, relinquish themselves of the rigid and conformist chains of ideologies, in favour of a pursuit of the truths of our earth, the reality of history, will inevitably be unravelled. Who built the temple of 3 windows? How did they construct such an astonishing site, built with such aligned precision, with such enormous stones? It is undoubtedly, highly compelling.

OUT OF MIND » TRUTH IN CONSPIRACY THEORIES? » HISTORIES MYSTERIES » Who Built Machu Picchu's Temple Of 3 Windows?