OUT OF MIND » THE INSANITY OF REALITY » GOVERNMENTS & THE NEW WORLD ORDER » RED ALERT: Globalist Cabal Needs A Major False Flag Attack Between Now And Election Because of Red Tsunami

KAVANAUGH ASSASSINATION PLOT PRUDUCES A 12.0 EARTHQUAKE ON THE RIGHT… 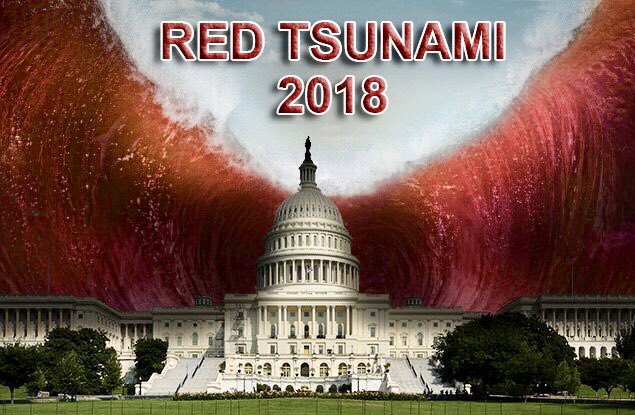 
The Law of Unintended Consequences

Especially when criminally insane psychopaths hatch evil schemes to achieve their misguided goals are the unintended consequences the greatest…as well as the most unforeseen.  Just how “highly coordinated, complex and convoluted a scheme to destroy the reputation of a candidate for the Supreme Court” was the Kavanaugh psyop?  As follows:

Blaseygate Bombshell: Here’s what really happened between Christine Blasey Ford and the C.I.A.

The transparent Kavanaugh assassination plot is just one such scheme that has already produced unanticipated consequences for the perps that they never imagined in even their most distorted and diabolical nightmares.
The extremely shortsighted Deep State Democrats only cared about one thing—torpedoing Kavanaugh’s candidacy by any means possible.  In so doing, they have sunk their own burning ship.  Now the countless liberal rats can be seen scurrying away from the crime scene.

KEY POINT: The normal SCOTUS confirmation process of “advice and consent” was morphed into “search and destroy” by the Democrats.  Except that the overzealous and extreme left-wingers unwittingly let loose a torpedo into the hull of the dilapidated USS Democrat.  Wow, you can’t make this stuff up, nor could a consummate strategist have made such a direct hit!

What even Trump himself could not do, the Democrats accomplished with their ill-fated conspiratorial plot to character assassinate Kavanaugh.  There was perhaps nothing else in the political universe that could have galvanized the Right like this shocking attempt to kill a moderate SCOTUS candidate.  Great work, lefties!  Sen. Graham admits not even Trump could get out the vote like the Kavanaugh character assassination will
It entirely true: when you commit an egregious crime in broad daylight at 42nd and Broadway, LOTs of people will notice.  They may even try to stop the crime, like so many in the Alt Media attempted to do in real-time.  Now the many alternative news platforms — especially the Alt Right — are united once again as they were prior to the 2016 U.S. presidential election.  Talk about politically devastating blowback, and other overwhelming “Unintended Consequences” for the Left. See: Democrats’ Kavanaugh assassination is reuniting the right 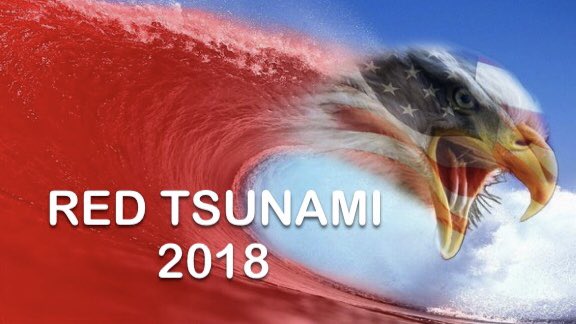 As the rats scamper away from the capsized USS Democrat, they will most definitely be looking for dramatic ways to shift the national conversation—FAST!   As soon as they believe they have sufficiently milked the Kavanaugh assassination for all they can, the Deep State will likely carry out yet another false flag mass shooting.  The timing couldn’t be better to remind gun control advocates just before the vote that “guns kill, not people”.
Of course, that’s crazy liberal logic for you, but that won’t stop the rogue liberals in the U.S. Intelligence Community from executing a mass murder using 5 or 10 assault weapons (e.g. AR-15s equipped with bump-fire stocks).  These liberal criminals think nothing of killing a whole bunch of innocent American citizens with military grade weaponry in order to compel the vulnerable politicians to push gun control legislation.
Let’s face it: there’s no more important mission for Deep State to accomplish than to take away our firearms.  This particular goal of Cultural Marxism is so critical to the globalist agenda that they know their New World Order is DOA unless they unconstitutionally repeal the right of gun ownership.
Therefore, it’s almost a sure thing that the Soros-controlled NGOs in collusion with criminal elements within the intel agencies and mainstream media will orchestrate a false flag attack on a strategically chosen American venue.  The primary purpose will be “Shock and Awe” to distract from their rapidly emerging Blaseygate scandal.

OCTOBER SURPRISE 2018: A Whole Month of “Shock and Awe”

Because Blaseygate was also implemented to distract from the Democrat’s Russiagate fiasco, the Soros-funded Left is clearly more desperate than ever to divert the attention of the electorate between now and November 6th. (BLASEYGATE: A Democrat Deep State Scandal Also Designed as a HUGE Distraction from…)  From a firefighter’s perspective, each successive political conflagration started by the Deep State Democrats sees them pouring more and more fuel on the fires to somehow cover up the previous blaze.
This is why it’s imperative to be vigilant for the rest of this month and right up to Election Day.  The level of desperation on the Left has reached stratospheric levels and shows no signs of changing its trajectory.  Everything the Democrats did in the process of assassinating Kavanaugh reveals such a degree of unparalleled recklessness that the Right should expect more of the same.  Hence, the Patriot Movement needs to be totally on guard and not easily provoked.
Many of the pre-appointed MK-ULTRA mind control programmed alters victimized by the C.I.A. for this very moment are being triggered, both individually and collectively, during this critical time period.  Therefore, it’s best to avoid confrontation whenever possible and to be aware of agents provocateurs at public events, especially planned protests and Democrat-controlled venues that are hosting conservative speakers.

Something Wicked This Way Comes…Between Now And Election Day 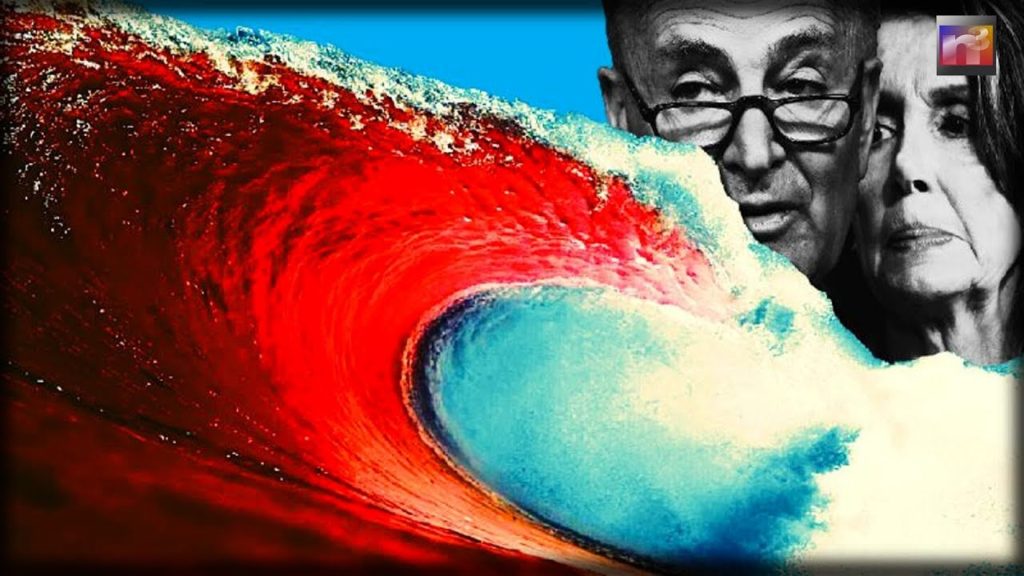 It’s crucial to understand that the Mainstream Media (MSM) has been conducting fake polls throughout this entire campaign season.  These card-carrying agents of the CIA’s Mockingbird Media, as it’s also known, have been falsely reporting that the polls are favoring Democrats in races across the nation.  Just google “blue wave”, the meme secretly created by the DNC and Big Tech to portray the spate of expected Democrat victories, and it’s easy to see how early this psyop was initiated.
Obama and Clinton, Biden and Sanders, Schumer and Pelosi, Harris and Booker, Schiff and Blumenthal, Waters and Warren, Brennan and Clapper et al. have all connived to fabricate the “blue wave” illusion that’s about to be overwhelmed by a massive red tidal wave.  And they don’t even see it coming; so much does the Left believe their own propaganda, just like the stunning Clinton rout of 2016.
Nevertheless, the fictitious polling can’t help but influence voters between now and November 6.  Everyone likes to say they voted for the winners so the manipulative hyper-progressives routinely conspire with their MSM co-conspirators so as to cynically move the unaware masses to the left.  This is precisely how elections are rigged every year.  The electoral process, in fact, has many points of structural weakness that are taken advantage of and criminally abused by the Democrats.  And, they are going full-bore this year because of what’s truly at stake.
The best response (and action) to these corrupt schemes to fix the election results is to raise awareness through education…and by conducting exit polls.  Exit polls are especially effective in preventing election theft.  When 55% or 65% or 75% of the respondents say they voted Republican in a specific race, it makes it quite difficult to get away with naked electoral fraud.  While it’s very easy to hack the voting equipment, at the end of the day the numbers have to add up; however, candidates and voters alike must demand recounts whenever appropriate and/or other forms of election result scrutiny.

The Democrats will see their tiny blue wave alright … …. … which will then be followed by a HUGE red tsunami.
The funny thing here is that, before the Democrat’s Kavanaugh fiasco, the Right was not very motivated to show up at the polls.  That’s all changed now thanks to the September “Shock and Awe” known as Blaseygate.  The perps simply never foresaw the enormous political quake that was generated in the American heartland and Deep South. 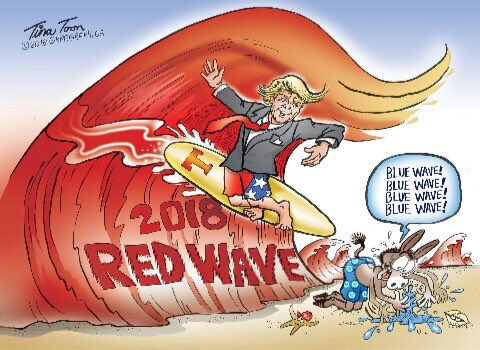 And the DEMs still don’t see this thing coming!

Every voter from center to right needs to show up and vote straight Republican this year. That’s not to say a GOP candidate might not be inferior; however, the Democrats must be deprived of leadership in every election in the country.  The message must be sent to these closet communists and violent anarchists, cultural marxists and political bolsheviks, delirious socialists and pathological progressives, crazy liberals and retrogressive progressives, dangerous Democrats and LGBTQ politicos on November 6:
“WE TOTALLY REJECT YOUR INSANITY … for the sake of future generations as well as ourselves.
State of the Nation
October 5, 2018
Author’s Note
At this point it really makes no difference if Brett Kavanaugh is confirmed or not by the Senate.  The earthquake has already happened; the red tsunami has formed, and it’s getting bigger by the day.  Now it’s time for the undecideds to join the immense RED wave or be crushed as a little blue ripple.
Recommended Reading and/or Viewing
The October SURPRISE of 2018 to be Preceded by a September SHOCK & AWE!
VIDEO: The October SURPRISE of 2018 to be Preceded by a September SHOCK & AWE!
___
http://stateofthenation2012.com/?p=105562

OUT OF MIND » THE INSANITY OF REALITY » GOVERNMENTS & THE NEW WORLD ORDER » RED ALERT: Globalist Cabal Needs A Major False Flag Attack Between Now And Election Because of Red Tsunami