OUT OF MIND » THE INSANITY OF REALITY » GOVERNMENTS & THE NEW WORLD ORDER » WHEW HEW!!! LOVE IT!!! Obama Throws Hillary Under The Bus – Clintons Furious 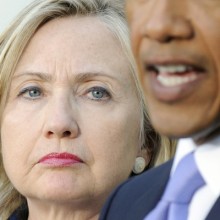 It appears that Barack Obama is ready to let Secretary of State Clinton
take the fall for the failure in security in Benghazi. During the
vice-presidential debate on Thursday it became clear that is what the
agenda was.
There is no doubt that is part of her responsibility in that role. According to the State Department’s website:

The Secretary of State, and by extension, the Chief of Mission (COM),
are responsible for developing and implementing security policies and
programs that provide for the protection of all U.S. Government
personnel (including accompanying dependents) on official duty abroad.
This mission is executed through the Bureau of Diplomatic Security (DS).
Personal and facility protection are the most critical elements of the
DS mission abroad as they directly impact upon the Department’s ability
to carry out its foreign policy. With terrorist organizations and
coalitions operating across international borders, the threat of
terrorism against U.S. interests remains great. Therefore, any U.S.
mission overseas can be a target even if identified as being in a
low-threat environment.

As a result, DS is more dedicated than ever to its mission of providing a
secure living and working environment for our Foreign Service
colleagues as they implement foreign policy and promote U.S. interests
around the world. Nearly 800 DS special agents serve in regional
security offices at over 250 posts worldwide. The DS special agents,
also called regional security officers (RSOs) when serving abroad,
manage security programs and also provide the first line of defense for
our personnel, their families, U.S. diplomatic missions, and national
security information. RSOs serve as the primary advisor to the COM on
all security matters by developing and implementing security programs
that shield U.S. missions and residences overseas from physical and
technical attack.

It seems that there is a legitimate reason for the
Obama administration to throw Clinton under the bus on this one and it
seems that everyone is on board with it, including Vice President Joe
Biden. Foreign Policy reports,

Vice President Joseph Biden speaks only for himself and President Barack
Obama, and neither man was aware that U.S. officials in Libya had asked
the State Department for more security before the Sept. 11 attack on
the U.S. mission in Benghazi, a top White House official told The Cable.

The Cable asked Deputy National Security Advisor for Communications Ben
Rhodes whether Biden was speaking for the entire Obama administration,
including the State Department, which acknowledged receiving multiple
requests for more Libya security in the months before the attacks.
Rhodes said that Biden speaks only for himself and the president and
neither of them knew about the requests at the time.

The State Department security officials who testified before House
Oversight Committee Chairman Darrell Issa’s panel Wednesday never said
they had made their requests to the president, Rhodes pointed out. That
would be natural because the State Department is responsible for
diplomatic security, not the White House, he said. Rhodes also pointed
out that the officials were requesting more security in Tripoli, not
Benghazi.

But, if you think that Hillary Clinton is going down without a fight,
you would be sorely mistaken. Already former President Bill Clinton has
stepped in to give his wife some aid in the matter.

My sources tell me that Clinton is working on a strategy that will allow
Hillary to avoid having Benghazi become a stain on her political
fortunes should she decide to run for president in 2016.

Bill Clinton has even gone so far as to seek legal advice about
Hillary’s liability in terms of cables and memos that might be
subpoenaed by the House Oversight and Government Reform Committee, which
this week launched an investigation into the deaths of Ambassador Chris
Stevens and three other Americans. The committee will also examine the
apparent Obama administration cover-up that followed the Benghazi
attack.

Finally, I’m told that Bill is playing with various doomsday scenarios,
up to and including the idea that Hillary should consider resigning over
the issue if the Obama team tries to use her as a scapegoat. That seems
unlikely to happen. But if relations between Obama’s White House and
Hillary’s State Department rupture publicly over the growing Benghazi
scandal, that could damage the Democratic ticket and dim Obama’s chances
for re-election.

Barack Obama has taken some initiative to protect his Attorney General
Eric Holder, though it is possibly because of his own involvement in
Operation Fast and Furious. It’s quite possible that Clinton is the one
that not only knew of the need for extra security for the Libyan
ambassador, but that she made the decision to not provide it.

OUT OF MIND » THE INSANITY OF REALITY » GOVERNMENTS & THE NEW WORLD ORDER » WHEW HEW!!! LOVE IT!!! Obama Throws Hillary Under The Bus – Clintons Furious