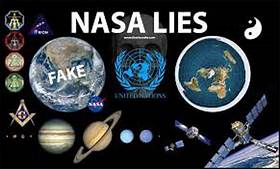 Every now and then I get not an article, but a document that someone has found, and today is one of those times, and I simply have to blog about it, because it is, in a word (or two words), a whopper doozie. It was shared by Mr. G.P., and ... well, there's nothing for it but to let you see it:
NASA Office of Inspector General Office of Audits Report No. IG - 19 - 002 A UDIT OF NASA’ S H ISTORIC P ROPERTY
Now, there's a paragraph towards the beginning of this document that leapt out at me, but first, a little context. You might recall a few years ago, Mr. Richard Hoagland broke the story that NASA had actually destroyed some of its Apollo program films and photographs. A NASA insider managed, quite literally, to save some of this. Other films and photos have curiously "gone missing" to the extent that it has fueled justifiable speculations that NASA was "hiding" something by tinkering and tampering with its archival record. With that in mind, consider this paragraph from page three:

NASA’s processes for loaning and disposing of historic personal property have improved over the past 6 decades, but a significant amount of historic personal property has been lost, misplaced, or taken by former employees and contractors due to the Agency’s lack of adequate procedures. Reclaiming this historic property has proven challenging because of the significant effort required to find the property as well as the Agency’s reluctance at times to assert an ownership claim over the items. In addition, past efforts to recover historic personal property have been thwarted by NASA’s poor record keeping and a lack of established processes for timely coordination of recovery efforts. for example, poor record
keeping contributed to the Agency losing possession of a n Apollo 11 lunar collection bag that contained lunar dust particles. In other cases, NASA’s delay or reluctance in asserting ownership of an item has led to missed opportunities to retrieve historical property. For example, a U.S. Air Force historian noticed what he thought was a NASA prototype
Lunar Rover Vehicle in a residential neighborhood in Alabama and reported his sighting to NASA, who then referred the information to the OIG . The OIG contacted the individual in possession of the rover, who expressed interest in returning the vehicle to NASA . The OIG requested NASA assert ownership of the rover and, if appropriate, make plans to accept it
as a donation; however, after waiting more than 4 months for a decision from the Agency , the individual sold the rover to a scrap metal company. NASA officials subsequently offered to buy the rover, but the scrap yard owner refused and, realizing its historical value, sold the vehicle at auction for an undisclosed sum.(Emphasis added)

Now, this may seem the most obvious thing in the world: if one is going to do space exploration, having a thoroughly thought-out archival procedure for identification, and tracking, of "space stuff" would simply seem to be common sense. Yet, the implication of this one paragraph is that in all the meticulous preparation for Apollo and the lead-ups to it - Projects Mercury and Gemini - NASA simply forgot to do so! There simply is no system. At all.
Nothing. Zilch. Nodda.
If you believe that, I have a bridge in Brooklyn for sale, cheap. No checks, no credit cards, no electronic blips or crypto-currencies. Cash and carry only.
As you might imagine, I have some high octane speculation about this, and it's regarding that statement that things were simply taken by former employees and contractors. That speculation can be stated in the form of a simple question: What if the lack of a system was deliberate? A policy designed to allow the archiving of artifacts privately, and corporately, by not having a policy? I suspect, in other words, that what we might be looking at is the ultimate system of hiding things; I've said it before, and I'll say it again: what better way to keep secrets, than to make them proprietary, to make them "intellectual property" by hiding them in corporations?
Let's crawl out further toward the end of the speculation twig: What if this non-system system was not only deliberate, but a quid pro quo with the very contractors that built all the equipment for those programs, both manned and unmanned? "You build this for us, and we'll give you special and exclusive rights to what is found." Indeed, if you followed the controversy surrounding Malin space science systems and the Mars probes of the 1990s, you'll recall that Michael Malin seemed to occupy a curious position: both as a NASA scientist involving the Mars probe (the Mars Orbiter and camera system) and  the Mars Pathfinder project, and the CEO of a company that designed and built the imaging systems. Indeed, during that episode, it was Malin's dual role that gave him and his corporation a virtual monopoly on what to photograph, and what to share with the public.
The bottom line? If you think getting a straight answer from NASA about what is "out there" is difficult, just wait until the space corporations have complete control. In that respect, perhaps the NASA study is a realization - perhaps to late - that contractors are just that, contractors, and that the government needs to reestablish control over its own space archive. Perhaps, in a sense, the study is an admission that things are being hidden, even from it, and its public space program. It's an admission, perhaps, that an essential component of any secret space program is an archive... a secret one.
See you on the flip side.

Thanks to J.P. Farrell at: https://gizadeathstar.com

» Property, Property Taxes, and the Whole Picture to Date by Anna von Reitz plus more
» Letter: Ending Immunities Granted to the Development Fund for Iraq and Certain Other Iraqi Property and Interests in Property Pursuant to Executive Order 13303, as Amended
» The Dog Ate Our Gold Audit!
» Audit the Fed Petition 2013
» AZ FORENSIC AUDIT WILL CONTINUE