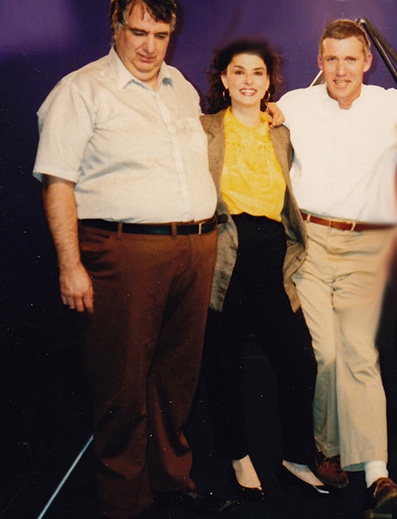 May 24, 1946 - September 5, 2018
This is the only pic I have with Preston Nichols (looking down) when he was a guest on my TV show "The Metaphysical Experience" along with Duncan Cameron. They are best remembered for The Montauk Project and the Philadelphia Experiment. I never felt connected to either project, nor the people involved, just to time travel experiments during World War II. My relationship with Preston and Duncan was about alien technology and Time Travel experiments from WWII Germany to this timeline. Through the years I have met others who were part of that experience/experiment most of whom have passed.
I first saw Preston on a video sent to me by researcher Bill Knell. Everything in my body, mind and soul trembled. I had never reacted so violently to anyone before nor since as that night when I hid under the covers listening to what they were saying about time travel.
We met a few months later at a lecture Preston was giving in Long Island. At the time Preston was living in Patchogue, Long Island near my mother's family though they didn't know each other. Preston and Duncan taught several classes at my home in Manhattan Beach, Brooklyn as well as appearing on my TV Talk Show, "The Metaphysical Experience" (pic above).
Did they sound crazy? For the most part they did but something about all of it was a catalyst to help me remember. From that point until this day one could equate this to a movie as people with the same memories - who didn't know each other - trickled into each other's lives.
I lost touch with Duncan but Preston, who had moved to upstate New York, would call once in a while for a friendly chat. Like others I met along the way, they were conspiracy theorists, most of whom I feel have psychological problems and/or substance abuse issues, though all believe in what they say. Anything is possible I suppose.
I went to sleep last night with a strange feeling that I couldn't explain - feeling more detached than I normally do. I woke up ten hours later feeling the same. Something was tugging at my soul having nothing to do with current events.
This evening I was guided to check out Author Peter Moon's Facebook posts after many years. Today Peter posted ...

"I just received news from Preston's friend, Clark, that Preston Nichols passed away this morning at 4am (today) October 5, 2018. He had suffered a heart attack in July followed by a stroke in September. The news of Preston's passage was also confirmed by another phone call. It is not known if there will be a conventional funeral. His body has reportedly been taken to a mortician, but I have no further information at this time. Preston is thanked for all the work he did to investigate the Montauk Project and bring issues to light that other would not look at. He always said his purpose was to get humanity through to a certain point. It is my hope that Preston will be able to do more from his new place in the universe."

Preston Nichols, was born in Long Island, New York, in 1946. He received degrees in Parapsychology, Psychology, and Electrical Engineering.
After graduating, he went into Defense Electronics and worked at Brookhaven and AIL. In 1968, Preston's involvement with Montauk began. He became involved with the tail end of stealth research at AIL. Preston was told that stealth research started right after the Philadelphia Experiment. (check for Montauk books HERE)
Preston claims to have actually read the final report of Project Rainbow - which we know as the Philadelphia Experiment. The report named the Cameron brothers as being the Navy liaison in the experiment. Next, he got pulled into the mind sciences project at Montauk. They were working on interfacing a person's mind to the computer.
Preston worked with Al Bielek on the psychic aspects of the Montauk Chair and the Montauk Boys program. Preston trained the Montauk Boys to be "PSI Warriors". The Montauk Chair used subtle quantum fields to read a person's thoughts. A psychic would lay in the chair, go into a trance, and a group of coils pick the emanations. A bank of radio receivers designed by Tesla would pick up and digitize the thought. Turning thought into computer code. The radar tower was used to turn thought into reality.
This chair was used for many purposes. One was to open up a vortex for time travel. Another was to collect and amplify the energy of fear generated from the Montauk Boys. Many Montauk Boys were lost forever to this program.
Preston still believes he is periodically pulled into working with these secret programs. The people who abduct him don't seem to care too much that he is talking about his experience.