Chrystia Freeland ~ The Self-Destruction Of The 1 Percent 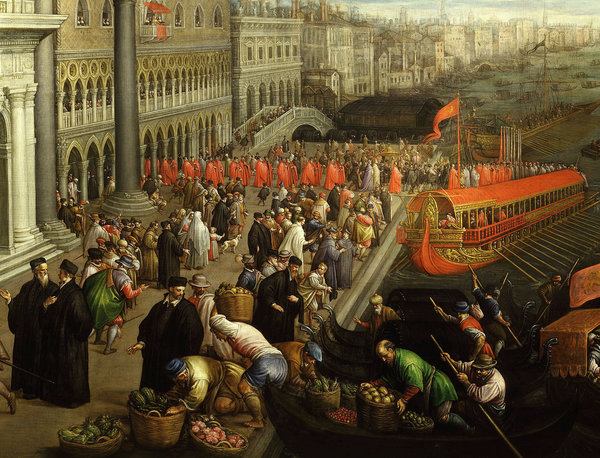 Artist Leandro Bassano ~ 17th-century Venice, with a view of the banks of the Grand Canal and the Doge’s Palace

OPINION ~ In the early 14th century,
Venice was one of the richest cities in Europe. At the heart of its
economy was the colleganza, a basic form of joint-stock company created
to finance a single trade expedition. The brilliance of the colleganza
was that it opened the economy to new entrants, allowing risk-taking
entrepreneurs to share in the financial upside with the established
businessmen who financed their merchant voyages.

Venice’s elites were the chief
beneficiaries. Like all open economies, theirs was turbulent. Today, we
think of social mobility as a good thing. But if you are on top,
mobility also means competition. In 1315, when the Venetian city-state
was at the height of its economic powers, the upper class acted to lock
in its privileges, putting a formal stop to social mobility with the
publication of the Libro d’Oro, or Book of Gold, an official register of
the nobility. If you weren’t on it, you couldn’t join the ruling
oligarchy.

The political shift, which had begun
nearly two decades earlier, was so striking a change that the Venetians
gave it a name: La Serrata, or the closure. It wasn’t long before the
political Serrata became an economic one, too. Under the control of the
oligarchs, Venice gradually cut off commercial opportunities for new
entrants. Eventually, the colleganza was banned. The reigning elites
were acting in their immediate self-interest, but in the longer term, La
Serrata was the beginning of the end for them, and for Venetian
prosperity more generally. By 1500, Venice’s population was smaller than
it had been in 1330. In the 17th and 18th centuries, as the rest of
Europe grew, the city continued to shrink.

The story
of Venice’s rise and fall is told by the scholars Daron Acemoglu and
James A. Robinson, in their book “Why Nations Fail: The Origins of
Power, Prosperity, and Poverty,” as an illustration of their thesis that
what separates successful states from failed ones is whether their
governing institutions are inclusive or extractive. Extractive states
are controlled by ruling elites whose objective is to extract as much
wealth as they can from the rest of society. Inclusive states give
everyone access to economic opportunity; often, greater inclusiveness
creates more prosperity, which creates an incentive for ever greater
inclusiveness.

The history of the United States can
be read as one such virtuous circle. But as the story of Venice shows,
virtuous circles can be broken. Elites that have prospered from
inclusive systems can be tempted to pull up the ladder they climbed to
the top. Eventually, their societies become extractive and their
economies languish.

That was the future predicted by Karl
Marx, who wrote that capitalism contained the seeds of its own
destruction. And it is the danger America faces today, as the 1 percent
pulls away from everyone else and pursues an economic, political and
social agenda that will increase that gap even further — ultimately
destroying the open system that made America rich and allowed its 1
percent to thrive in the first place.

You can see America’s creeping Serrata
in the growing social and, especially, educational chasm between those
at the top and everyone else. At the bottom and in the middle, American
society is fraying, and the children of these struggling families are
lagging the rest of the world at school.

Economists point out that the woes of
the middle class are in large part a consequence of globalization and
technological change. Culture may also play a role. In his recent book
on the white working class, the libertarian writer Charles Murray blames
the hollowed-out middle for straying from the traditional family values
and old-fashioned work ethic that he says prevail among the rich (whom
he castigates, but only for allowing cultural relativism to prevail).

There is some truth in both arguments.
But the 1 percent cannot evade its share of responsibility for the
growing gulf in American society. Economic forces may be behind the
rising inequality, but as Peter R. Orszag, President Obama’s former
budget chief, told me, public policy has exacerbated rather than
mitigated these trends.