A German tourist died on Friday when hit by lightning on the island of Sardinia while another person struck by lightning several days ago died in hospital, Italy's Civil Protection Agency said on Saturday. 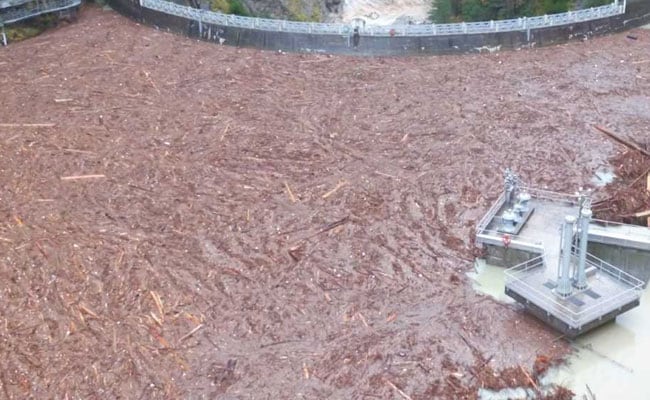 Many of the victims to date have been killed by falling trees after the storm in Italy.
MILAN:
Heavy rain and gales devastating parts of Italy have claimed two more lives, taking the overall death toll to at least 17, and laid waste to vast swathes of forest.

A German tourist died on Friday when hit by lightning on the island of Sardinia while another person struck by lightning several days ago died in hospital, Italy's Civil Protection Agency said on Saturday.

A spokeswoman said 17 deaths related to the severe weather had been reported to the Agency so far.

Many of the victims to date have been killed by falling trees. Coldiretti, the association of Italian agricultural companies, said in a statement that gales had destroyed around 14 million trees, many in the far north.

Areas from the far northeast to Sicily in the southwest have been affected by the storms, with the worst damage in the northern regions of Trentino and Veneto - the region around Venice - where villages and roads have been cut off by landslides.

In the Alps near Belluno, 100 km (60 miles) north of Venice, pine trees and red spruces were snapped wholesale like matchsticks.

The surface of the Comelico Superiore dam, farther north near the Austrian border, was covered with the trunks of trees that had fallen into the Piave river.

"We'll need at least a century to return to normality," Coldiretti said.

Many of the squares and walkways of Venice itself have been submerged in the highest floods the canal city has seen in a decade.

The governor of Veneto, Luca Zaia, said the region's storm damage amounted to at least a billion euros ($1.1 billion).

Angelo Borrelli, head of the Civil Protection agency, said Veneto had seen winds of up to 180 kph (112 mph), and that the situation there was "apocalyptic".

Deputy Prime Minister Matteo Salvini was due to visit the region on Sunday.

VENICE, Italy – Fierce storms that have continued to batter Italy for several days led to more casualties on Sunday after torrential rains caused deadly landslides on the island of Sicily.
A spokesman for the Sicilian capital’s Prefecture has said that the torrential rain triggered landslides and flood waters, which led to the death of ten people around the Palermo region.
The spokesman added that some people continued to remain missing following the horrific landslides.
Later in the day, officials from other areas on the island confirmed more fatalities that took the overall death toll form the storms in the country to 29.
The local media quoted an official as saying that a car was hit by a landslide the Sicilian town of Agrigento, killing two people inside.
The death toll due to bad weather that was released by Italy’s Civil Protection Agency on Sunday stood at 17, excluding the deaths reported in Sicily through the day.
Last week, officials said that violent storms lashing the country caused record breaking rainfall in the country, leaving towns and cities submerged in flood waters.
Floods in several parts of the country caused severe damages to roads, bridges and key infrastructure, and causing thousands of trees to be uprooted.
Italy’s northwestern coastal region of Liguria was said to be the hardest hit in the country, while most of the fatalities until Friday were reported in Naples, Liguria, Lazio and Veneto.
Further, floods forced several highways in some key parts of the country to be closed down to avoid untoward accidents.
On Wednesday, authorities said that a major European truck route in northern Italy – the Brenner Autobahn highway, which connects Italy’s Modena with Innsbruck in Austria – was forced to close temporarily after heavy rains and floods caused a landslide.
The storm severely damage several ports in Rome, tearing boats from their moorings.
Authorities in the Italian capital city said that heavy winds had uprooted over 100 trees and forced the closure of some major tourist attractions, including the Colosseum and the Roman Forum.
Further, authorities in Venice said that the historic city had witnessed one of the worst floods in its entire history – which had caused flood waters to cover three-quarters of the city for the first time in a decade.
The adverse meteorological conditions in Venice were predicted to cause flooding that looked set to reach the levels of the devastating 1966 flood that struck both Venice and Florence.
The flooding also caused possibly irreversible damage to the historic 924-year-old St. Mark’s Basilica.
The procurators of the church pointed out that the Basilica has experienced such conditions only once before in the last 100 years.
By mid-week, the levels of flood waters were peaking at 156 cm and had entered the body of the cathedral, damaging the bronze metal doors and columns of the church and submerging its mosaic floors in water for several hours.
The First Procurator Carlo Alberto Tesserin told the local news agency, “The basilica has aged 20 years in just one day. It is becoming ever more difficult for us and indeed could become impossible for us to repair the damage, especially in an age of climate change.”
By the end of the week, over 6,000 firefighters had been dispatched and were working to clear the debris across several roadways in the country.
Further, the northern regions of Trentino and Veneto had reported the worst damage in the floods.
Luca Zaia, the governor of Veneto estimated that storm damage in the region already amounted to at least a billion euros.
On Sunday, the Italian Prime Minister Giuseppe Conte wrote on Twitter that he was leaving to visit Sicily.
Conte said that he was also in constant touch with officials on the dramatic situation in the north of the country.