A massive and Illegal Geoengineering Project has been Detected off Canadas West Coast Tue Oct 16, 2012 7:11 pm

Russ George, in conjunction with a First Nations village on Haida
Gwaii, has dumped around 100 tonnes of iron sulphate into the Pacific
Ocean in a technique known as ocean fertilization. The experiment, which
is in violation of two United Nations moratoria, has outraged
environmental, legal, and civic groups.

The iron sulphate was dumped into the Pacific back in July, but
recent satellite images are now confirming its effects — an artificial
plankton bloom that’s 10,000 square kilometers (6,214 square miles) in
size. The intention of the project is for the plankton to absorb carbon
dioxide and then sink to the bottom of the ocean. George is hoping to
cash in on lucrative carbon credits. 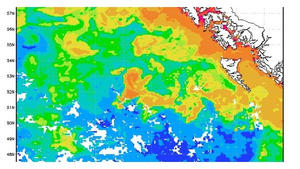 To make the project happen, George convinced the local council of an
indigenous village to establish the Haida Salmon Restoration
Corporation. He told them that the project would restore salmon
populations, leading the First Nations people to channel more than $1m
of its own money into the project.

Critics say it is a “blatant violation” of United Nations rules, and
the matter is currently under investigation by Environment Canada.
Experts contend that the project violates the UN’s convention on
biological diversity (CBD) and London convention on the dumping of
wastes at sea, which both prohibit for-profit ocean fertilisation
activities. According to the Guardian, the news publication
that broke the story, George claims that the two moratoria are a
“mythology” and do not apply to his project. The Guardian reports:

George is the former chief executive of Planktos Inc,
whose previous failed efforts to conduct large-scale commercial dumps
near the Galapagos and Canary Islands led to his vessels being barred
from ports by the Spanish and Ecuadorean governments. The US
Environmental Protection Agency warned him that flying a US flag for his
Galapagos project would violate US laws, and his activities are
credited in part to the passing of international moratoria at the United
Nations limiting ocean fertilisation experiments

Scientists are debating whether iron fertilisation can lock carbon
into the deep ocean over the long term, and have raised concerns that it
can irreparably harm ocean ecosystems, produce toxic tides and lifeless
waters, and worsen ocean acidification and global warming.

“It is difficult if not impossible to detect and describe important
effects that we know might occur months or years later,” said John
Cullen , an oceanographer at Dalhousie University. “Some possible
effects, such as deep-water oxygen depletion and alteration of distant
food webs, should rule out ocean manipulation. History is full of
examples of ecological manipulations that backfired.”

George says his team of unidentified scientists has been monitoring
the results of the biggest ever geoengineering experiment with equipment
loaned from US agencies like NASA and the National Ocean and
Atmospheric Administration. He told the Guardian that it is the
“most substantial ocean restoration project in history,” and has
collected a “greater density and depth of scientific data than ever
before”.

“We’ve gathered data targeting all the possible fears that have been
raised [about ocean fertilisation],” George said. “And the news is good
news, all around, for the planet.”

UN officials will be meeting in Hyderabad, India, later this week to
discuss the issue, including possible upgrades to enforcement policies.

And as Silvia Ribeiro of the watchdog ETC Group has noted, “If rogue
geoengineer Russ George really has misled this indigenous community, and
dumped iron into their waters, we hope to see swift legal response to
his behavior and strong action taken to the heights of the Canadian and
US governments.”