OUT OF MIND » PERCEPTUAL AWARENESS » OTHER DIMENSIONAL » The Borders of Normal: A Clinical Psychiatrist De-Stigmatizes Paranormal Phenomena

The Borders of Normal: A Clinical Psychiatrist De-Stigmatizes Paranormal Phenomena


“I refuse to commit the fashionable stupidity of regarding everything I cannot explain as a fraud.” ~ Carl Jung, a Swiss psychiatrist, and psychoanalyst who founded analytical psychology 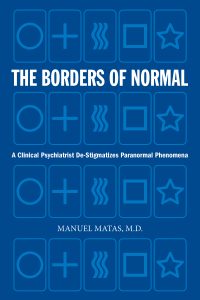 There are many things happening in our world which require tossing aside assumptions and pre-conceived notions that cannot be explained by modern science. The Borders of Normal explores, through lived experience, a wide variety of paranormal phenomena, including near-death and out-of-body experiences, encounters with message-bearing apparitions, precognitive dreams, telepathy, visions, and more. At first reluctant to share his own experiences, Dr. Manuel Matas discovered the benefits of open discussion and sharing of paranormal, anomalous, and spiritual experiences, in order to combat the stigma which still attaches to these events.


Seven Things You Need to Know About Paranormal Phenomena

1. Everyone is psychic. Psychic and paranormal experiences — such as ESP and telepathy — are far more common than we think.
2. The paranormal is really normal. “Para” means “beside.” Paranormal means beside normal. It does not mean abnormal. Paranormal experiences are nothing to feel embarrassed about or ashamed of, nor are they any reason to feel proud or special. It is simply part of life.

3. Surveys have shown that 50% of bereaved people report they feel the presence or hear the voice or have a vision of the deceased loved. Deathbed visions are extremely common, the most common type of deathbed vision is seeing a deceased relative or friend who has come to take the dying patient to the other side.
4. One of the more surprising aspects of deathbed visions or voices is that they are sometimes not just experienced by the person who is dying, but also by the visitors and the medical personnel at the bedside.
5. Creative people are visionaries. Throughout history and in every culture, people have had visions and have received messages from the Spirit world. These include Biblical prophets, such as Daniel and Ezekiel; historical figures like St. Francis of Assisi or Joan of Arc; creative geniuses such as William Blake and William Burroughs; or modern-day visionaries like Elon Musk and Steve Jobs.
6. Blind people who have out-of-body experiences during surgery under general anesthesia have reported being able to see when they are out of their bodies. One blind man, when he woke up from the anesthetic post-surgery, was able to describe the color and pattern of his surgeon’s tie, which he was able to see when he was out of his body. Another blind man, post-surgery, was able to tell the nurse where she put his false teeth because while he was under the anesthetic, he left his body and he watched the nurse put his teeth in a drawer.
7. It’s important to distinguish between hallucinations that are symptoms of a psychotic illness, and visions, voices, or other sensory phenomena which are not psychotic, but which may be due to stress, isolation, or grief. There is a difference between psychotic and non-psychotic hallucinations. Psychotic hallucinations tend to be frightening. Non-psychotic (psychic) voices and visions tend to occur far less often and they tend to be comforting and reassuring, not frightening and threatening. Even if they only occur once, their impact can last a lifetime.
EDITORS NOTE: The Borders of Normal is available at www.drmatas.ca
You will also enjoy Time for an Intuition Tune Up

Manuel Matas, MD, has been a clinical psychiatrist for forty years. For most of his professional career, he worked in university teaching hospitals. The author of The Borders of Normal: A Clinical Psychiatrist De-Stigmatizes Paranormal Phenomena, Dr. Manuel Matas explains the field of study known as meta-psychiatry (literally: “beyond psychiatry”). Meta-psychiatry represents the confluence of psychiatry with spirituality and metaphysics, which is the philosophy of being and knowing. Throughout his life, Dr. Matas has had a number of experiences which could be considered anomalous or paranormal. It is his hope that by sharing his knowledge and experience in both psychiatry and the world of the unknown, he will provide a bridge between these two worlds and will give people permission to share their own experiences without shame or embarrassment. For more information visit drmatas.ca
“A psychiatrist uses his personal experiences and stories from many different times and cultures in an attempt to redefine the public perception of psychic phenomena. … His goal is to persuade readers that paranormal activity — such as extrasensory perception, prophetic visions, and spirits— is real and he does so through example. The breadth of his references is remarkable.” ~ Kirkus Reviews

Re: The Borders of Normal: A Clinical Psychiatrist De-Stigmatizes Paranormal Phenomena Mon Dec 03, 2018 9:23 am

Posts : 398
Join date : 2017-04-21
Great stuff Purps, thanks.
I completely believe in the paranormal. A while back I lost  (really I thought I lost Her but it was only Her physical self that returned home) the love of my life and shortly after someone at the time a perfect stranger also lost the love of Her life. From the other side M & S our partners met and guided this stranger and I together from opposite sides of the globe. This beautiful, super intelligent and talented woman is now one of my closest friends and has become like a little sister to me and I'm pretty sure She was my little sister previously. We share each others pain and are able through M & S to help others and to laugh together so to me there is no supernatural it's all natural it just takes us children here time to understand it.

OUT OF MIND » PERCEPTUAL AWARENESS » OTHER DIMENSIONAL » The Borders of Normal: A Clinical Psychiatrist De-Stigmatizes Paranormal Phenomena