SETI Astronomers Find No Evidence for Artificial Transmitters on Oumuamua

SETI Astronomers Find No Evidence for Artificial Transmitters on Oumuamua Sat Dec 08, 2018 10:52 am


In October 2017, a fast moving object of extrasolar origin, named ‘Oumuamua, was discovered close to the Earth with a ground-based telescope in Hawai’i. Motivated by the hypothesis that ‘Oumuamua could conceivably be an interstellar probe, astronomers from the SETI Institute used the Allen Telescope Array (ATA) to search for radio transmissions that would indicate a non-natural origin for the object. 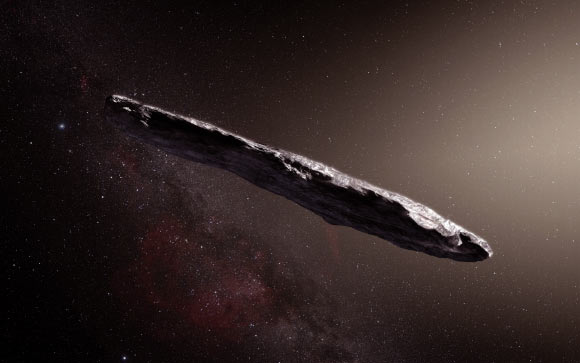 This artist’s impression shows the first interstellar asteroid — 1I/2017 U1 (’Oumuamua). Image credit: M. Kornmesser / ESO.
Following its discovery in October 2017, ‘Oumuamua was the subject of popular speculation about a possible non-natural origin.
Its highly elongated shape and the fact that no coma was observed strengthened this hypothesis for some, as these are uncharacteristic of asteroids and comets.
A recent paper by Harvard Smithsonian Center for Astrophysics researchers Dr. Shmuel Bialy and Professor Abraham Loeb has also suggested the possibility that ‘Oumuamua is a deliberate construction.
The scientists argued that the slight, unexpected acceleration observed for this object could be caused by pressure from sunlight as ‘Oumumua swung around the Sun. Their hypothesis is that the object might be a light sail, either deliberately or accidentally sent our way.
A deliberate origin is considered somewhat more likely because our Solar System is a very small target for any object that is not being aimed.
Such arguments strengthen the importance of observations that can constrain the true nature of ‘Oumuamua. 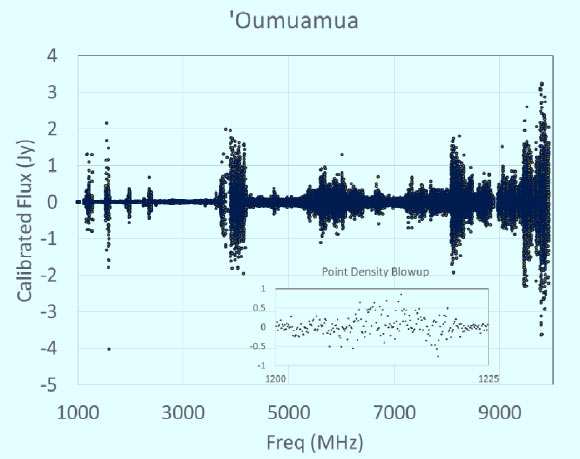 Plot of point source fits to the ‘Oumuamua position at 100 kHz intervals from 1-10 GHz. Image credit: Harp et al, doi: 10.1016/j.actaastro.2018.10.046.
“We were looking for a signal that would prove that this object incorporates some technology – that it was of artificial origin,” said SETI Institute researcher Dr. Gerry Harp, lead author of a paper published online in the journal Acta Astronautica.
“We didn’t find any such emissions, despite a quite sensitive search. While our observations don’t conclusively rule out a non-natural origin for ‘Oumuamua, they constitute important data in assessing its likely makeup.”
Dr. Harp and co-authors observed ‘Oumuamua when it was about 170 million miles away, or slightly less than the diameter of Earth’s orbit.
The observations were made between November 23 and December 5, 2017, using the wide-band correlator of the ATA at frequencies between 1 and 10 GHz and with a frequency resolution of 100 kHz.
No signals were found at a level that would be produced by an omnidirectional transmitter on-board the object of a power of about 10 watts or more.
In portions of the radio spectrum that are routinely cluttered by artificial satellite telemetry, the threshold for detection was higher.
In all cases, these limits to the powers that could be detected are quite modest — comparable to that of a citizen band radio.
_____
G.R. Harp et al. 2019. Radio SETI observations of the interstellar object ‘Oumuamua. Acta Astronautica 155: 51-54; doi: 10.1016/j.actaastro.2018.10.046