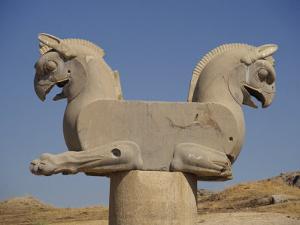 
Support Our Fight Against Academic Fallacies: Patreon: https://www.patreon.com/MysteryHistory Facebook: https://www.facebook.com/MysteryHisto... Twitter: https://twitter.com/Mysterytweetery Steemit: https://steemit.com/@mysteryhistory Narration By Don Moffit: www.DonMoffit.com There are many ancient sites which upon exploration, create an air of doubt surrounding the academic explanation as to their origins. Supposed constructors simply incapable of creating such wonders. Raising logical questions within the minds of the astute. With Iran being a place littered with such structures, one of the most famous of which, known as Persepolis. Found upon the banks of the river Pulvar, this plateau of trilithons and mythical carvings, simply baffle modern sculptures and indeed the modern man. The site possesses claimed Achaemenid styles of architecture. Although we feel these claims are a misconception, and are in reality, the work of someone else. Declared a World Heritage Site in 1979, the ancient Persians, claimed it as their own city, naming it “Pārsa,” which means Old Persian. However, it seems, like so many other inexplicable sites found around the world, it was simply re-inhabited, yet unlike these many other sites, inscriptions found upon buried treasure at the site, actually possesses an inscription, left by one of the oldest rulers of the Persians, openly admitting this re-inhabitation as a reality. Treasure found still successfully concealed at the site, a sign of the people’s loyalty to their king, not discovered until modern times, presumably protected by them, and its secret location, until theuir death at the hands of Alexander The Greats invaders. Solid gold & silver tablets preserving the kings account of the site’s origin. Quote, Darius the great king, king of kings, king of countries, son of Hystaspes, this is the kingdom which I hold, from the Sacae who are beyond Sogdia, to Kush, from Sind to the Indus valley to Lydia and the Oldest of Persia Spardâ, - this, bestowed upon me by Ahuramazda, the greatest of gods. May Ahuramazda protect me and my royal house! An inscription I perceive as an explanation that the ruler himself, due to the site’s8888 incredible nature, believed it had been built by the gods, and by divine right, had been bestowed upon him. Archaeological evidence accumulated by the French archaeologist André Godard, who excavated Persepolis in the early 1930s, believed that it was Cyrus the Great, who chose the site Persepolis was built upon, and that Darius I built the terrace and the palaces. These conclusions, I assert were due to Darius and Cyrus re-utilising such structures as their places of burial, this due to their divine perceptions, explained upon these once hidden treasures. When one visits the site, they are initially confronted with gigantic megalithic stones, not only within its foundations, creating the platform used as a stronghold for many years. But also, somehow set aloft, forming still existing trilithons, which regardless of the demolition efforts undertaken by alexander, still litter the site. A 125,000 square meter terrace artificially constructed, partly cut straight out of Rahmat mountain. An additional factor which supports my argument, of a highly advanced builder, are the Lamassu. These mythical animals reminiscent of centaurs are many tons in weight, and in a previous video, we shown the tremendous challenge a mere 150 years ago, transporting such megaliths was. Not to mention the tremendous artistic achievements these stone carvings would have been, along with countless other, intricate, masterfully carved artworks, throughout the site which mystify all who gaze upon them. Furthermore, and perhaps most interesting, are the far more primitive looking versions. Some argue were incomplete, others argue were attempts by future primitive cultures. These attempts, although in some areas share tool markings reminiscent of patterns, like those of the stone cutting technologies we have recently been studying in depth, may just bes mere coincidences due to the random hacking, that seems to have been undertaken upon the stones. Due to the positioning of the Persepolis plateau, it was logically not constructed as a military stronghold, but rather a temple devoted to something else. It is a site full of compelling features, most of which, in direct contradiction to that which is claimed by modern academia, and indeed their institutional cohorts, Iran’s museums, it is a site, we find, highly compelling.