2018 brought hurricanes, winter storms, severe weather, cold outbreaks, floods and drought. But there were some weather events this year that were downright strange. They include weather phenomena in unusual locations and times of year, ones that repeatedly hit one place and of course, record-breakers. Some of the phenomena are even too strange for a Weather 101 textbook.

Visible satellite image composite of the four nor’easters of March 2018.(Individual image source: NOAA/RAMMB/CIRA)
Four nor’easters – Winter Storms Riley, Quinn, Skylar and Toby – in three weeks brought misery to millions along the Eastern Seaboard in March 2018. Incredibly, we nearly had a fifth. A fifth low-pressure center developed in March a bit too far offshore to join the fearsome foursome from earlier in the month.

The tornado watches issued in the United States in 2018 through Nov. 28.(NOAA/NWS/SPC)
2018 was a record year for tornadoes in Connecticut, featured a first-on-record February southwest Pennsylvania tornado, the first Wyoming F/EF3 tornadoes since 1987, a record October Pennsylvania outbreak, a record December Illinois outbreak and the strongest tornado to hit Washington state since 1986, in December, no less.
Preliminary statewide tornado reports in Iowa and Louisiana (84 each through Dec. 18) far surpassed those from tornado-prone Texas (50), Kansas (45) and Oklahoma (24), according to data from NOAA’s Storm Prediction Center.
Two of the top three most active days for tornado reports in 2018 – Halloween and the Illinois Dec. 1 outbreak – were in the fall, rather than the typically more volatile spring or early summer months.
The U.S. was on pace to finish 2018 with the fewest tornado fatalities since 1875.

8. Alberto Made it to Michigan 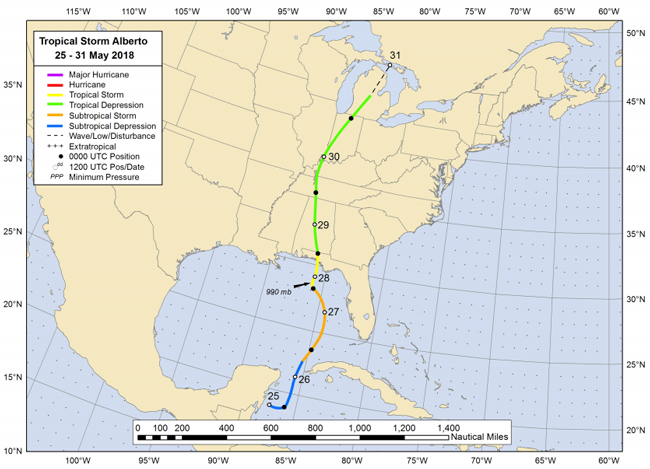 The track of Tropical Storm Alberto, color-coded by intensity, from May 25-31, 2018, according to NOAA’s best track database. Alberto remained a tropical storm as far north as Lower Michigan.(NOAA/NWS/NHC)
After a Memorial Day landfall in the Florida Panhandle, deep moist air and a lack of strong shearing winds kept what was once Tropical Storm Alberto’s remnant circulation intact far enough inland that it was still a tropical depression on May 30 about 170 miles west of Saginaw, Michigan.
The only other tropical cyclones to have tracked that close to Saginaw since the mid-20th century, according to NOAA, were tropical depressions Arlene and Dennis in 2005, tropical depression Candy in 1968 and tropical storm Connie in August 1955.

GOES-East GeoColor visible satellite image showing wildfire smoke from Canada and the western U.S. almost encircling Subtropical Storm Ernesto on Aug. 16, 2018 at 6:00 a.m. EDT. A Saharan dust plume can also be seen east of Ernesto.(CIRA/RAMMB)
The 2018 Atlantic hurricane season will be most remembered for the massive flooding from Florence and a borderline Category 5 strike from Michael.
Perhaps the weirdest thing about the season, though, involved a named storm that never threatened land.
In August, the jet stream channeled a plume of wildfire smoke from California and western Canada several thousand miles over the north Atlantic Ocean, where Subtropical Storm Ernesto was curling northeast well off the coast of Newfoundland.
On August 16, the GOES-East satellite caught the bizarre occurrence of wildfire smoke caught up in the outer circulation of Ernesto as it was being whisked toward western Europe. 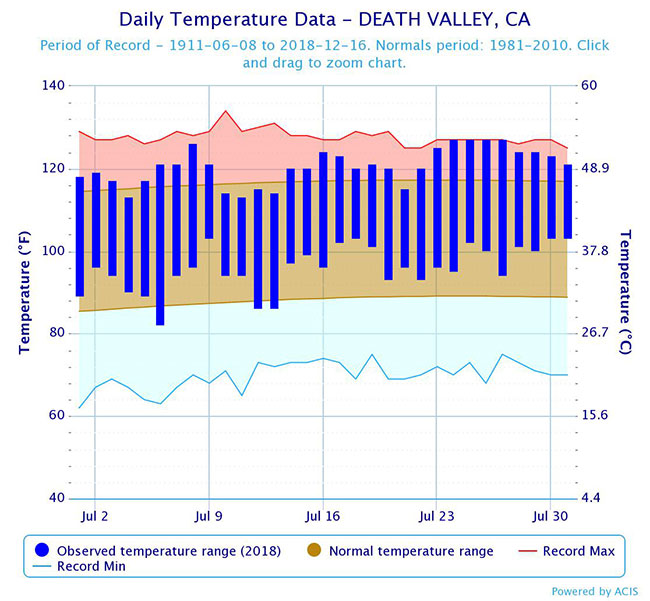 Graph of daily high and low temperatures, illustrated by the blue vertical bars, during the record-setting warm month of July 2018 in Death Valley, California.(NOAA/ACIS)
All-time heat records were smashed in 2018 on the Korean Peninsula, in Japan and in Scandinavia, contributing to massive wildfires there.
But the most eye-popping heat record of 2018 was set in one of the world’s hottest places.
As Weather Underground’s Dr. Jeff Masters and Christopher Burt documented in a Category 6 blog, July 2018 in Death Valley, California, was the hottest month on record for any reliable weather station on Earth.
How hot, you ask? High temperatures rose to at least 125 degrees five straight days in late July. Ten July days featured triple-digit low temperatures, something that typically occurs only once a year there.

5. Small Hawaii Island Wiped Out By a Hurricane

East Island, before and after being nailed by Hurricane Walaka.(U.S. Fish and Wildlife Service)
Hawaii had an impressive year of weather in 2018.
A U.S. 24-hour rain record may have been set in late April in Kauai. That was followed four months later by Hawaii’s wettest tropical cyclone on record, Hurricane Lane. Just three weeks after Lane, Olivia became the first tropical cyclone on record to landfall in Maui and Lanai.
None of those storms wiped out an entire island.
In late October, Hurricane Walaka tracked well west of Hawaii’s largest islands. East Island, an 11-acre strip of sand in the French Frigate Shoals, took a direct hit from Walaka. Satellite images after Walaka confirmed the island had been washed over.

4. Apriluary, Then a Record Warm May

Statewide temperature rankings in April (first image) and May (second image) 2018. The darkest blue/red shadings correspond to states that set their record coldest/hottest respective months on record in 2018.(Data: NOAA/NCEI)
The coldest April in 21 years for the Lower 48 states was followed by the hottest May in NOAA records that date back to 1895. How’s that for a temperature whiplash?
Climate scientist Dr. Brian Brettschneider wrote this was the largest area of Earth to undergo a record cold-to-warm shift in consecutive months in the last 100 years.
Minneapolis-St. Paul went from its heaviest April snowstorm of record in mid-April to a Memorial Day high of 100 degrees in just six weeks.

Smoke from the Camp Fire in Northern California can be seen billowing down into the Bay Area.(GOES-16/Colorado State University)
November’s Camp Fire, California’s deadliest and most destructive wildfire on record, had a serious side effect outside its ground zero in the town of Paradise.
A stagnant weather pattern allowed smoke from the fire to drape over parts of the Central Valley and Bay Area for almost two weeks. An air quality sensor in San Francisco measured double the city’s previous record for particulate pollution 12 straight days from November 9-20.
Pollutant values in Sacramento on November 16 were almost double those in both Beijing and New Delhi. Schools were closed, masks were distributed to the homeless, even San Francisco’s famed cable cars were shut down.
This “rare and extremely dangerous air pollution episode,” according to Dr. Jeff Masters in a Category 6 blog post, likely to led to indirect, premature deaths from the wildfire just from the smoke.

Some years we struggle to pick the weirdest weather event. 2018 was arguably the easiest number-one choice we’ve had.
On July 26, the Carr Fire descended on the city of Redding, California, eventually damaging just over 1,600 structures on its way to becoming one of the largest wildfires in state history.
What was truly jaw-dropping, though, was the tornado-like vortex generated at the leading edge of the fire, that uprooted trees, crumpled high-tension electricity towers, debarked trees and even damaged homes that weren’t otherwise burned.
The National Weather Service’s damage survey estimated winds of at least 143 mph in the fire whirl, equivalent to an EF3 tornado. A November 2018 study found the vortex extended up to 17,000 feet above ground.
California only had two previous F/EF3 tornadoes in 68 years of records, both of which were in Southern California in the 1970s.
This EF3 fire whirl was just one chapter in a terrible year for wildfires in the state.

Of course, there were many more strange things we saw in 2018. Here is just a sampling in chronological order.
Snow and even freezing rain blanketed parts of north Florida.
A Pennsylvania ice jam sent a wave moving upstream.
Snow blanketed Sahara sand dunes.
One Montana city saw an 82 degree temperature rise in one day.
A Massachusetts city hit 80 degrees …. in February.
Lake-effect snow fell in parts of Oklahoma City.
A rare horseshoe vortex cloud was captured over Nevada.
A hailstone set an Alabama state record.
African dust turned snow orange in eastern Europe.
A wave near New Zealand set a Southern Hemisphere record.
Two meteotsunamis developed over Lake Michigan in one day.
NWS documented one of New England’s longest-track tornadoes 10 days after it happened.
A dust devil lifted chairs at a softball game in Canada.
A Texas Panhandle wildfire triggered a hail-producing severe thunderstorm.
A tropical cyclone made landfall in Somalia.
The first Category 3 landfall of record in southwest Oman dumped over 24 inches of rain.
A flight was diverted to El Paso, Texas, after being pummeled by hail.
It snowed in Newfoundland days after the summer solstice.
A Montana town was raked by severe weather three times in 24 hours.
Smoke from Siberian wildfires invaded the U.S.
Perhaps 2018’s most impressive meteotsunami inundated Mallorca, Spain.
A different fire whirl became a waterspout over the Colorado River.
This British Columbia fire whirl sucked up a firefighter’s hose.
Hurricane Florence had a weird and unfortunate track that smashed state rain records.
The U.S. had its hottest summer nights on record.
Western Colorado went from severe thunderstorms to snow in one hour.
The U.S. almost had a Category 5 landfall.
Video captured a Texas bridge ripped apart by floodwater.
Hurricane Leslie loafed, lollygagged, then ended up off Portugal.
Anchorage had a record-long wait for its first freeze of the fall (Oct. 28).
Houston had its record earliest trace of snow and Monroe, Louisiana, had its record earliest accumulation.
North America had its most widespread November snow cover since 1966.
Airplanes triggered snow near Chicago.
A tropical cyclone rained fish over India.