By Emma Betuel
on December 21, 2018
Filed Under Biology & Genetics

The double helix of the DNA molecule, shaped like a twisted ladder, graces the cover of DIY genetics tests and high school biology textbooks worldwide. First identified in 1953, the has taken on a symbolism that lives on outside of the world of genetics. But the truth is, it’s just one of few shapes that DNA can take. This year, scientists confirmed the existence of another one that for years had proved mysterious and elusive.

For decades, scientists have proposed the “human telomeric i-motif,” a shape that looks distinctly different from the twisted ladder we’re used to. But until the Nature Chemistry paper published this April, this “i-motif” had never been seen in a living cell. Study author Mahdi Zeraati, a Ph.D. student at the Garvan Institute of Medical Research in Sydney, had tracked the i-motif down in a sample of human cells and became the first to ever identify them there.

This story is #8 on Inverse’s 25 Most Surprising Human Discoveries Made in 2018. 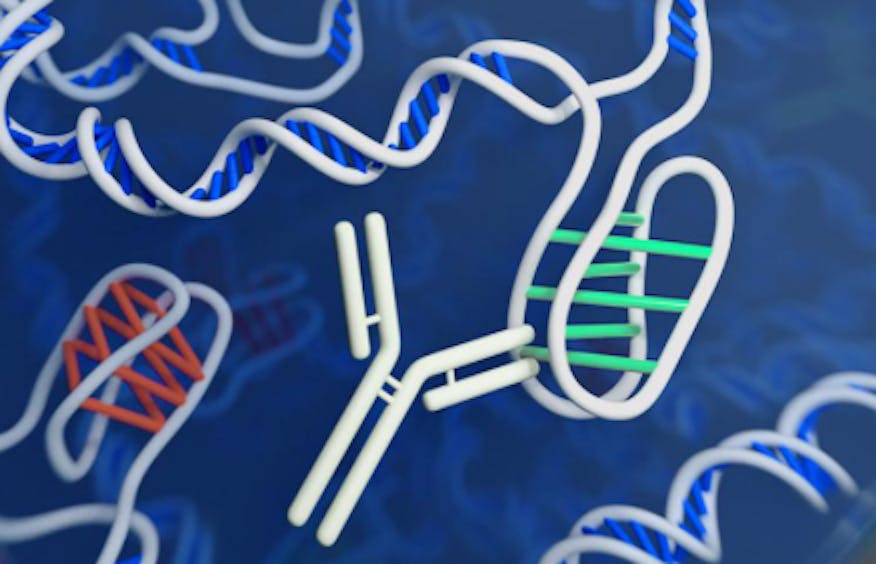 A rendering of  i-motif with the white antibody attached.
Up close, the i-motif actually looks a bit like a clump and differs from the double helix we know and love in an important way. The double helix is elegantly organized via bonds between four bases that make up the “rungs” of its famous ladder: cytosine, thymine, adenine and guanine. These bases usually follow predictable rules: adenine on one strand bonds to thymine on the other, and the cytosine on one strand seeks out a guanine on the other.

Article continues below
Our Science and Innovation teams bring you all of today’s news that’s helping shape your tomorrow.
Sign up for our newsletter:


But in the i-motif, the cytosines stay a bit closer to home and bind to one another on the same strand. This forms form a knot-like shape, as associate professor and study co-author Marcel Dinger, Ph.D., explained.
“In the knot structure, C letters on the same strand of DNA bind to each other — so this is very different from a double helix, where ‘letters’ on opposite strands recognize each other, and where Cs bind to Gs,” Dinger said.

Antibodies made it possible for photos of the i-motif to be snapped in living human cells.
To identify the i-motif, Zeraati created an antibody that could seek out DNA with that strange knotted shape, which is how Zeraati captured his images. These showed him that the i-motifs also come and go at different points in the cell cycle. At this early stage, this might be a sign that the i-motif forms part of an on/off switch that controls which genes get transcribed and which ones don’t.


“We think the coming and going of the i-motifs is a clue to what they do,” said Zeraati. “It seems likely that they are there to help switch genes on or off, and to affect whether a gene is actively read or not.”
That’s still an early theory, but it’s still big news that we found this shape in a real human cell. The question for 2019 will be to find out what it actually does.