The FED Is the Real Enemy
of the American People 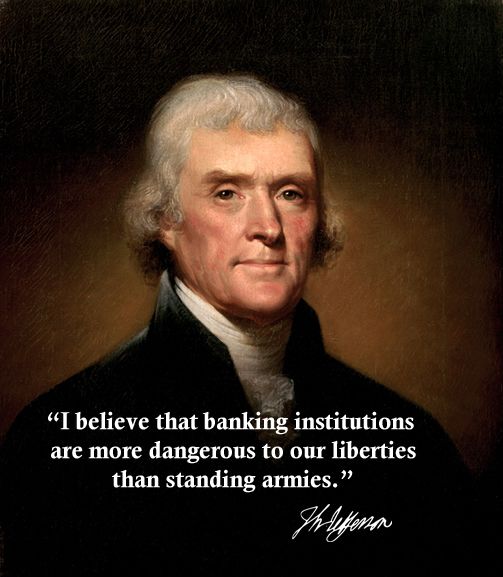 It’s either We the People or the Federal Reserve;
there’s no room for both in a free nation.


Who can argue with any of these self-evident statements?

Each one is entirely true as the election of Donald Trump has revealed.
In fact, Trump tweets alone have exposed the whole bloody system for what it truly is:
THE ENEMY OF THE PEOPLE.

And it’s a HUGE however, mind you!
It’s the FED, and especially the Central Banks worldwide, that are the REAL enemy of the people.
In fact, the whole world is now witnessing just how dangerous and deadly, reckless and feckless the Federal Reserve Bank (FED) can be.
Only the initiated really understand that the FED has always been this dangerous throughout its entire existence … … … as we all watch FED Chairman Jerome Powell intentionally trigger a stock market crash in real-time.
As a matter of historical fact, every stock market crash and economic depression has been caused directly by the actions (and inactions) of the central banks … and before central banks by the large private banks that constituted the International Banking Cartel.
The many bankster institutions that make up the current Rothschild Crime Syndicate are only the latest incarnation of a draconian system of currency control and manipulation that goes back over 5000 years.  Before the Rothschild clan there was the Black Nobility of Northern Italy in the late 1200s. And way before them there was the Babylonian Brotherhood of the ancient Middle East with many other bankster entities in between. 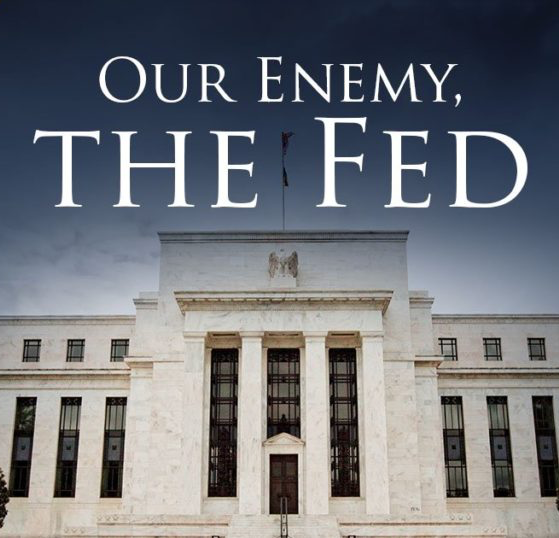 2018: The Year the FED Exposed Itself

True to form, President Trump has once again taken to Twitter to expose the single biggest scam in world history—the utterly fake Federal Reserve System.
Truly, it doesn’t get any bigger than the Central Banking Racket.  It also doesn’t get any more perilous since it is these international banksters who have purposefully engineered every single war in modern history.
That’s just what these perennial perps do: they look for new ways of wealth creation and it just so happens that war is a really great business.  The globalists also thrive on the disaster capitalism that results after the wars.  They also take advantage of war opportunities to put into practice their primary MO — Ordo ab chao — with which to fabricate new nations and societies.
This is why there is such a chorus of disagreement with Trump’s troop pull-out from Syria and Afghanistan.  The banksters need and want war to fuel their artificially propped up perpetual war economy the world over.
This is also why Powell has no reservations about triggering a full-blown stock market crash — IN BROAD DAYLIGHT — this Christmas.  Nowadays the banksters don’t even care that the American people see their premeditated collapse of the entire Global Economic & Financial System.
That’s right: Powell is completely unconcerned that everyone knows he is carrying out the devastation of the various markets and national economies worldwide.  The FED has always exercised this much power and influence but surreptitiously implemented their secret agendas of monetary destruction under the radar…way under.
Not so anymore as people everywhere watch Powell insidiously raise the interest rate at a time of extreme instability and increasing insecurity, great risks and growing uncertainty, as well as general fear, apprehension and anxiety permeating the global investment community.  What a ‘perfect time’ to jack up the FED interest rate!
Why, pray tell, would the FED Chair make such a stupid move?  Actually a series of stupid moves throughout 2018.
Because he’s been told to by his Deep State handlers who have been coerced by their International Banking Cartel masters, that’s why.

Powell is Deep State’s inside man to execute the nuclear option—aka an engineered stock market crash!

As FED Chairman, Powell, himself, has no real power… it’s all perceived power.  In fact the POTUS can fire him in a heartbeat if he feels the necessity to do so. See: “Legally the President can fire the Chairman of the Federal Reserve under a specified cause” but Deep State would have us believe otherwise.

However, it’s the extensive list posted above, each culprit of which is clearly an “enemy of the people”, which must be reconsidered in light of this critical analysis.
You see, each and every one of those exceedingly dangerous institutions runs on money.  With regular funding, they can carry out their nefarious deeds with impunity and then cover them up for decades.  And so they have… at the request of the banksters.
As the notorious and prototypical “enemy of the people” Mayer Amshel Rothschild once said:

December 2018: The Month of HUGE Happenings

Who can deny that this December has seen a blitz of major events and radioactive revelations?  The George H.W. Bush funeral alone has got people talking like never before. See Something quite HUGE is about to go down: Martial Law, Military Tribunals or Both?
Of course, before that unparalleled psyop, the American people were provided with indisputable evidence of a statewide black operation conducted in California.  It’s all spelled out at SMOKING GUN: Hard Evidence Shows Camp Fire Was Manmade, Genocide and Mass Destruction of Paradise Carefully Planned.
Then the nation was treated to a rapid series of Trump tweets and Deep State-busting initiatives that the Right has correctly perceived as a Christmas present.  Each of these unprecedented moves and maneuvers was designed for the upcoming BIG EVENT. See: Trump’s been on a very serious mission preparing for the real battlefield after January 1, 2019
Even the well-timed government shutdown will have many unintended benefits for We the People.  Not only is this brilliant political move revealing the Democrats and RINOs as stone-cold traitors to the American Republic, it’s giving the Trump administration the legitimate pretext to jumpstart the military tribunals for mass treason.  The FED chairman and his fellow governors ought to be the first on the docket.

GOVERNMENT SHUTDOWN: Good! Keep it shut down so that We the People …
… can see how worthless, wasteful and woeful it is.

KEY POINT: The Federal Reserve Bank is not federal, it’s supranational.  There’s no reserve; it’s actually in deep debt.  The FED is really not even a bank; it’s a printing press that makes Federal Reserve Notes, which are debt instruments not assets with real value, out of thin air.

Now the reader understands why the FED is truly the enemy of the people.
We are all watching it wreck and ruin the U.S. economy in real time and with purposeful design.
Therefore, Trump’s only alternative is to: Fire Powell Now … BEFORE HE CRASHES THE MARKETS!  And, to do so before a market crash sets up a cataclysmic domino effect that has been pre-planned by the New World Order globalist cabal for decades.

Bottom Line: Deep State and the FED Are Conspiring to Crash the Markets and Collapse the Economy

In light of these stark realities, there is one immediate response that must be taken to prevent the “THEIR FINAL SOLUTION” from manifesting.

Special Note: It’s true that the stock market is nothing but a rich man’s casino.  It’s actually a global gambling casino where the house always wins and the bettor always loses…even when they think they won.  In this way the New York Stock Exchange, as well as all the other exchanges, serve to transfer massive amounts of wealth from the small investors to the moneyed class.  The degree of insider trading alone that’s done by the power elite is staggering as it translates into trillions of dollars of profits every year.  Truly, the world will be a much better place when the markets collapse, once and for all.  At the end of the day, it will be the 4 “Ds” that take down the system for good as explained in this prescient piece: The ‘FOUR HORSEMEN’ Herald the Death Knell of Global Economic & Financial System

State of the Nation
December 24, 2018
Endnotes
Excerpt from “Economic Armageddon and Financial Apocalypse Are Upon Us”
DISCLAIMER: “… It is the Federal Reserve System, and its fatally flawed practice of debt-driven, fractional reserve banking that is the object of our scorn and derision. Likewise, it is the Federal Reserve Bank (FED) that deserves our condemnation and searing criticism. Why? Because the FED is not legitimate. It is not a properly constituted or correctly legislated organ of government, and it’s actually a privately owned consortium of banking agents whose ownership is more foreign than domestic. The FED is legally unfit to conduct business on behalf of the American people since, as a private entity, it lacks the congressional oversight necessary when appropriated funds have been allocated by the legislative branch of government. The printing presses of the FED produce notes – as in promissory notes – which are nothing but instruments of indebtedness for all who possess them. Not too unlike credit cards, actually. Therefore, the money that it prints is counterfeit. Is it surprising that an international, privately owned crime syndicate, which issues fake money, would be the biggest player in the worldwide funny money monopoly game that is bringing the entire world of commerce, finance and business to a virtual standstill? We are talking about the greatest ongoing financial crisis in recorded history. And the FED is institutional PUBLIC ENEMY #1 responsible for this multi-decade crime spree.“

Posts : 1827
Join date : 2012-02-15
Age : 66
Location : Ct
Well, this is all wonderful information, and quite factual. However, we have all knowN this for many many years, and to date nothing has ever been done...nor will it be done unless it benefits the PTB. You folks constantly underestimate these guys. They are twenty years ahead of all of us...So, I suggest that you all realize that there is very little you can do...Trump is just another tool for the elite, He is not a savior, he has assigned tasks that he will complete just as Obama had.

» Housing Crash Is Confirmed! Experts Warn About The Economic Collapse 2019 Stock Market CRASH!
» We Are On The Eve Of Another Possible Stock Market Crash, The Largest Ever One Session DJIA Point Loss Is Imminent!
» ForbesPredicts Stock Market Crash WORSE Than the 1930′s
» BANK COLLAPSE : Biggest Stock Market Loss In History
» The Stock Market, Fatally Wounded By The Truth, Will Stumble And Crash